Now I`ve never done western desert, so i don`t own any DAK. I did originally just think to use my late war NW Europe Germans to fight the various French and Yank forces in Tunisia. But as usual, my wargamers "head" took over and I`ve built a generic, reinforced rifle company out of spare figures. The change in colours has actually been quite pleasent, I doubt I`ll do anymore, but we all know how such vows are quickly forgotten :-) 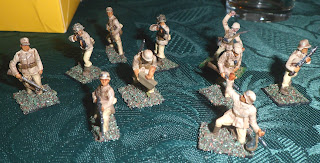 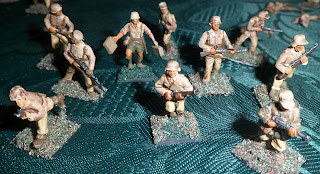 3 x 10 figure rifle platoons, each with an MG34 team.
Mix of odd figures, mostly Italeri plastic DAK, but also figures by - Airfix (including a mountian trooper), Esci, SHQ and Elhiem (Luftwaffe Filed Division) with several minor conversions among them and finally a Combat Miniatures Handskar trooper (with a head-swop).

Support weapons
A mix of Matchbox and Italeri figures, except for the MG loader who was a CP Models Pole (head-swopped)! 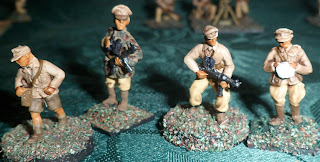 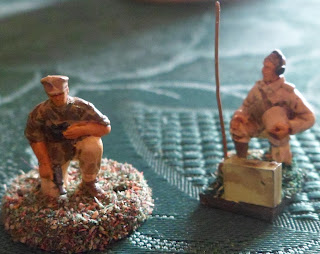