The Invasion of Majorca (article)

Another article which originally appeared in The Journal

I’ve always been fascinated by amphibious operations during wars – Gallipoli, Torch, D-Day, Inchon etc; the logistics involved in such daring assaults really ignites my interest. I quickly realised however that as a wargamer I could never re-create such large scale landings, not having either the room or the time or figures required. So I’ve been limited to running small scale landing operations usually just a small part of something more grand.

Whilst I was researching into the Rif War (Morocco 1919-26) [see Journal 53 for the results of this research], I found that the Spanish had carried out two amphibious operations in (at Alcazarseguer in March 1925 and at on September 8th). When I was reading up on these landings I found several references to an invasion of during the Spanish Civil War? I was intrigued and did a little digging to find further information. Later in the summer of 2005, I found myself on and actually visited the small fishing village – Porto Cristo where the Republican soldiers landed back in August 1936! Surprisingly there was not a statue or plaque (at least not one I could find) to this event in Porto Cristo. Anyway here are the results of my brief study into this interesting and very game-able operation:

In the summer of 1936, a group of Spanish Generals began a rebellion against the elected government. The Balearic Islands were quickly brought under the control of the rebels (except for ) with the military authorities assisted by local members of the right-wing Flange party. The rebels attempt to take control of had been a total disaster so when news began to filter back of the Nationalist occupation of the islands of Majorca, , Formentera and Carbrera. Regarded as part of , with popular feelings running high, plans were quickly formulated to send a Catalonian Expeditionary Force to liberate the isles.

Two separate forces set out, neither with the knowledge or consent of the Republican government in . One from , under the command of a Civil Guard Captain Manuel Uribarri with 1,200 men. (Mostly anarchist militia but including about 400 Civil Guard). These set sail in a liner – Mar Cantabrico, escorted by two destroyers – Almirante Antequerra & Almirante Miranda. This force headed first for Carberra (August 1st), then onto Formentera (August 8th) and finally (August 9th); none of these landings were seriously opposed and all three islands were soon secured for the Republic.

And from a much larger force commanded by an naval air force officer – Captain Alberto Bayo (later to be Fidel Castro’s Guerrilla trainer). This force’s objective was Majorca it consisted of: 2,000 men (mostly regulars and Catalan militia) in eleven merchantmen escorted by the Battleship – Jaime I (see notes below); the Cruiser – Libertad; 3 submarines and a torpedo boat; these arrived in in late July. 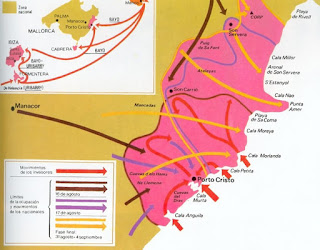 After a couple of weeks planning Bayo completed his palns for the landings the date chosen was August 16th. The initial force had been swelled by additional volunteers from . A substantial naval force was assembled including ex-British K-type landing barges for transporting the assault units ashore from the merchantmen. Under cover of an intense bombardment the mixture of militia, regulars, Civil Guards and naval marines pored ashore in Anguila Cove near Porto Cristo on the east coast of the island. The Nationalists faced with overwhelming odds withdrew in land, at this point confused by their sudden and unexpected success, the Republicans settled down on the beach without trying to exploit the situation. They did however unload vital supplies, vehicles (cars and various lorries) and some artillery – six 75mm and four 105mm guns.

Finally as the days passed, the Republican’s became bolder and began to advance in land a beachhead of 25 miles long by 8 miles deep. They formed columns which began to probe outward from this bridgehead, but as Nationalist resistance increased until these advances ground to a halt. Then on the 27th things turned for the worse, Mussolini had promised military aid to the rebels and it started to arrive on the island in the form of three Italian SM81 bombers and three CR32 fighter planes. Until this point the Republicans had benefited from air superiority with Dornier Wal float planes and bombers flying from the mainland. The self-styled “Dragons of Death” quickly reversed this situation and gained complete control of the air, once this was achieved, they began strafing and bombing the republican troops too.

Further infantry reinforcements were flown in including a force of Italian Black shirts, plus loads of much needed supplies. A counter-offensive commanded by Lt Colonel Garcia Ruiz was launched on the 3rd September under a sustained artillery barrage. Over 2600 Nationalist troops began a series of bold thrusts into the Republican enclave. At first, though shocked by the ferocity of the Rebel attack, the Republican militia retired in good order. However as the days wore on, casualties mounted. With no adequate medical supplies or field hospitals, harried from the air and under constant bombardment, an orderly retreat became an unnecessary rout. Despite a numerical superiority of nearly three to one the militia began to abandon their equipment and flee to the coast, the Nationalists close on their heels. No mercy was shown. A convent converted into a makeshift hospital was captured and all the militiamen therein were slaughtered. Many of the 400 militia women who fought alongside their male counterparts were abandoned to their fate in the rush to flee the island. These women were some of the few prisoners taken, all the men being shot out of hand. Much was later made of the abandoned 'milicianas' by Nationalist propaganda. By September 13th it was all over and Italian Planes were already bombing . The republicans so demoralized by the disaster on decided to abandon the islands and retreat back to the mainland.

American defense attaché in reported that the force "after an initial success, suffered disaster due to Italian bombing [which inflicted] heavy losses and finally forced a precipitate withdrawal."

By the end of September all of the Balearic isles except were back under Rebel control. remained a part of the Republic until the end of the civil war, when it surrendered without a shot being fired. By 1938 Nationalist warships strategically based in () and aided by German and Italian aircraft had the Republicans effectively blockaded and they were an important factor in its defeat.

Jaime I – Battleship (below)

Was of the Espana Class.  This was a pre-WWI ship and was one of the world’s smallest dreadnoughts with her sister Espana, displacing only 15,700 tons standard and mounting a main battery of 8 12”/50 cal. in two turrets fore and aft and two turrets amidships.  Twelve coal fired boilers gave them a speed of 19.5 knots on 20,000 HP.  Jaime I carried 20 4”/50cal. guns and some AA.  Both had belts of from 3 to 9 inches, deck armour of 1 to 2 inches and 10 inch turret armour. 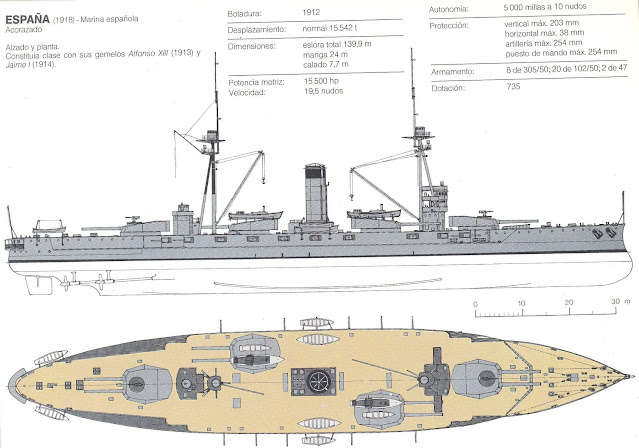