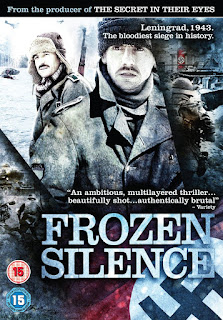 This is a Spanish movie (subtitles)

Russian Front, Winter 1943. A patrol from the volunteer Spanish "Blue" Division encounters a series of horses frozen dead at the surface of a lake. The bodies are partly submerged beneath the ice. When the patrol discover check out the area they find the body of a Spanish soldier. his throat cut and on his chest carved the words - "Have I not seen God,".
The man called upon handle the investigation is Arturo Andrade (Juan Diego Botto), a former police inspector, who takes the job with precision and professionalism. Arthur believes that the murder is related to Masonry. There is also a second hypothesis: that the victim was a pro-Soviet agent infiltrated the Division, and "Have I not seen God," a warning to other potential collaborators. 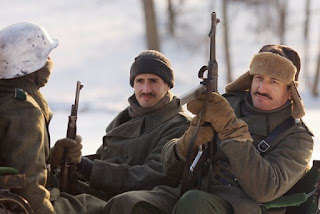 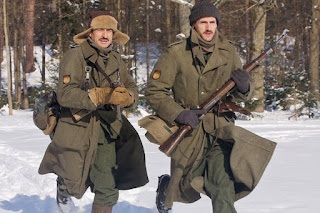 So what you have is a murder mystery set in the depths of a Soviet winter during WW2. The fact that it is placed within the Blue Division gives it flavour with the politics of the recent conflict in Spain and differences between the Spanish and their German allies to the local population.

The acting is good, the lead character trying to do his job whilst all the time having to cope with the complicated politics and left over resentments of the Civil War; he is a simple policeman trying to solve a murder. This is NOT a war film per se, this is a murder mystery set during wartime, there is virtually no actual war. But the details, uniforms, equipment and buildings are very good, this is a well made, well researched movie.