The Battle of Jarama (article)

This article originally appeared in The Journal

“There's a place in called Jarama It's a place that we all know too well. For 'tis there that we fought against the fascists and saw a peaceful valley turn to hell”

After failing to take Madrid by frontal assault General Francisco Franco gave orders for the road that linked the city to the rest of Republican Spain to be cut. A Nationalist force of 40,000 men, including men from the Army of Africa, crossed the on 11th February, 1937.

General José Miaja sent three International Brigades including the Dimitrov Battalion and the British Battalion to the to block the advance.

Originally titled Saklatavala Battalion, but later changed to Clement Attlee for political motives. Kitted out at the old Guardia Civil barracks in with a uniform of sorts – thin corduroy jacket which button up to the neck, trousers of the same thin material, both far too thin for the climate in December. This uniform came in various shades of brown – rarely matching between the trousers and jacket. Army issue boots of poor quality and a khaki beret completed the uniform. Additional kit was provided – two thin cotton blankets (rolled into a sausage like arrangement with the two ends tied together) and worn like a bandolier. The leather equipment was a belt with brass buckle, cross straps, bayonet frog and two large ammunition pouches. Each man was issued with a groundsheet cape similar to the type worn by British troops during WW1. The final piece of equipment issued was a French 1918 pattern helmet.

Each man was issued with a “Russian Rifle” (probably the Mosin-Nagant 1891 model) with bayonet. The battalion was also given locally manufactured grenades – made from a short length of mild-steel pipe with half a stick of gelignite inside with a short fuse!

Each company had 4 French Chauchat 8mm automatics called “Shossers” by the Spanish; one gun per infantry platoon.

Each company also had 4 Colt/Browning M1895/14 machine guns; again one per platoon.

The 2nd company was designated the battalion machine gun company and they had 8 wheeled Maxim guns (1910 model).

4 - Infantry companies of 4 platoons each 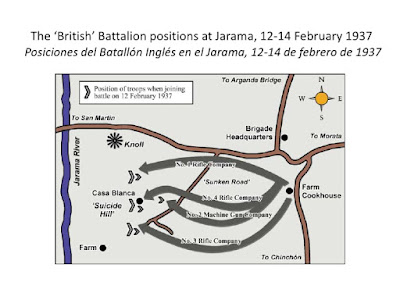 The map shows the advance of the British Battalion on February 12th towards the , they were ordered to form a blocking position centred on the small hill (which later became known as “Suicide hill” with a white farmhouse “Casa Blanca”). As can be seem the 2nd Company moved forward and dug-in in front of the sunken road with its 8 Maxim machine guns to cover the advance of the other rifle companies. Battalion HQ was situated in a small cottage by this sunken road, with a direct (be it intermittent) telephone line to brigade HQ. The jump off points for the other companies are also marked - 1st on the right near the road to San Martin; 4th company in the centre and 3rd on the left.  Gal’s Brigade HQ was situated about a mile back in an old stone quarry; here there were telephone operators and the Brigade staff.

The attack plan was for the three rifle companies to advance and envelop the hill before moving on towards the river beyond.

Facing the British Battalion was at least one Grupo (Regiment) of Franco’s highly skilled and battle-hardened Moroccan Regulares, supported by German Artillery and machine guns.

3 x Tabors (Battalions) each of:

3 X Secciones (platoons) each of:

HQ commanded by a Sargento (sergeant)

The company had nineteen mules for the transport of four Hotchkiss machine guns.

The attack was a disaster; minutes after the companies began their advance they were met by a storm of accurate artillery and heavy machine gun fire. No1 company with most of the more experienced men and a good leader (Kit Conway), dug-in on the reverse slope of their little hill. No3 company lost both its officer and second in command along with over half its strength. No4 Company was worse as its commander (Overton) was totally unsuitable and proved incapable of either giving or carrying out his orders, casualties were high. To make things worse the Browning MGs had been supplied with the wrong belts – so would not fire and the Chauchats were prone to clogging with mud and proved near useless in combat.

The Moors of course were well supported by artillery and MGs, but also were highly skilled experienced soldiers. The moved forward in small groups using the terrain, one group covering whilst another advanced, in this way they were able to maintain a continuous and accurate stream of fire against the already shocked and disorganised British.

Eventually the companies were ordered to withdraw back to a line along the sunken road and dig-in with the line centred on the machine gun redoubt and Battalion HQ. During the evening a platoon of Spanish regulars from the Lister Brigade arrived and was added to the line on the far Right near the .

By the morning however the situation was further complicated by an order for the Battalion to advance and re-take the hill with the White Farm. Clearly Brigade had no idea of the casualties suffered the first day, but the order stated that the Battalion was to advance in support of the Lister Brigade and not to do so would expose the Spaniards flank to the Moors. The battalion it turned out was holding the left flank for the entire Brigade! By this time several groups of stragglers had been gathered but, the battalion strength was much reduced, all the automatics except the Maxims had been abandoned or lost.

After much arguing Wintringham with the aid of George Aitken the Political Commissar organised the attack - Overton on the left; Conway on the right and Diamond through the centre; each group with roughly 40 men, supported by Harry Fry and his Maxims. The advance never got underway however, the moment the British scouts began to filter through the olive groves, the Moors opened up with machine guns and then their supporting artillery joined in. The attack was halted before it began, with no signs of the tanks or aircraft which had been promised or the Lister Brigade either.

About an hour into the action without warning the redoubt of No2 Company was overrun (it turned out that Overton had withdrawn on the left without notifying anyone and the Moors had been able to out flank the position). Wintringham was wounded in a suicidal “over the top” attempt to retake the position which caused many casualties only the arrival to two Russian tanks prevented the Moors from breaking through although these could not retake the position.

The first days attack could be run as it was historically; I would suggest an umpire play the Nationalists. On paper the British Battalion looks quite strong with the Strossers and Brownings in each platoon. However the lack of training (only No1 Company can really be considered trained) and the poor quality officers (again only No1 Company has an experienced leader); combined with these useless weapons and the strength of the opposition make the chances of any success slim. If you want to give the British a chance you could allow the Brigades artillery to assist or add a Russian tank or two.

For the second day maybe the best way to run it would be a Nationalist assault on the dug-in Battalion along the sunken road. The Battalion is very weak so I would consider adding some troops from the Lister Brigade as well as some artillery and the Russian tanks. Even with all this support the Moors with their artillery and overwhelming numbers will be hard to stop.