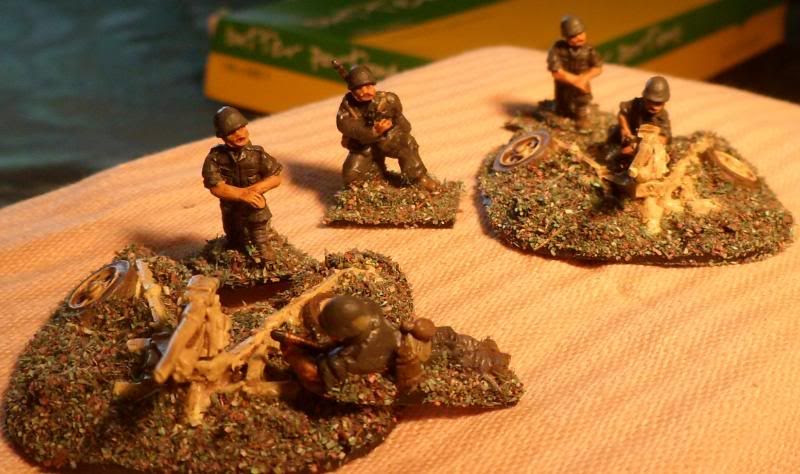 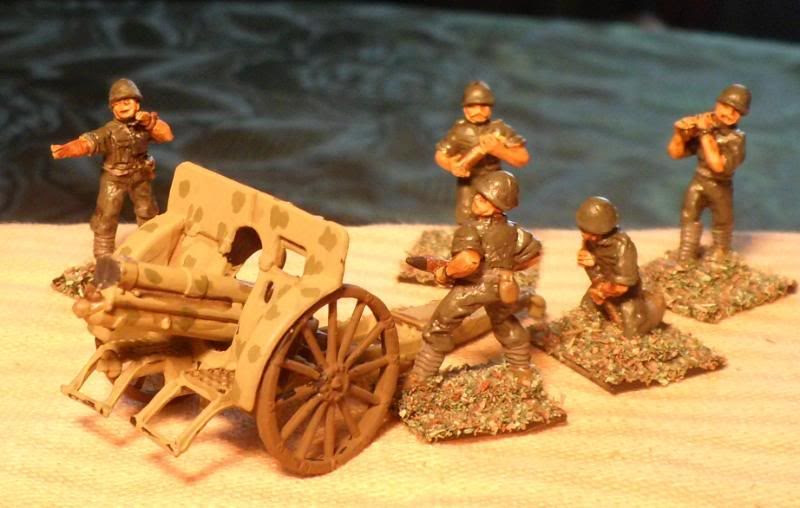 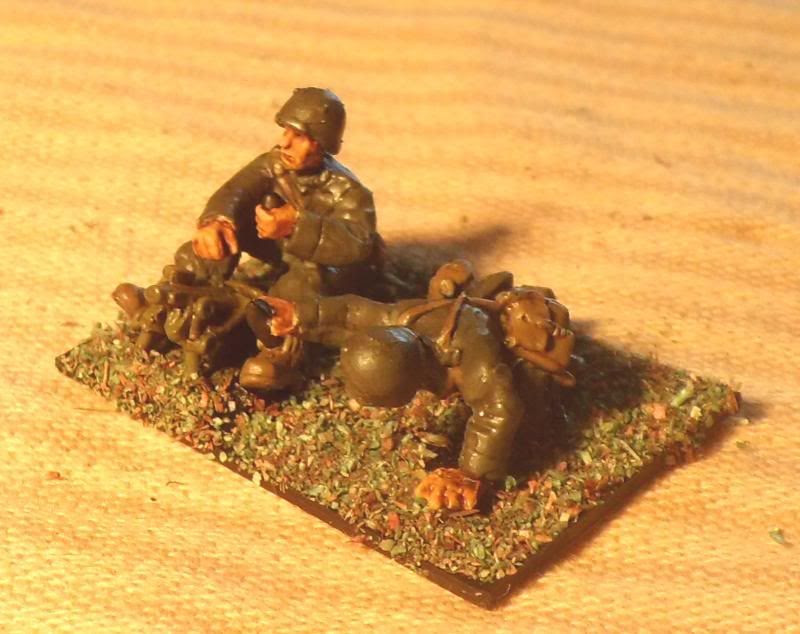 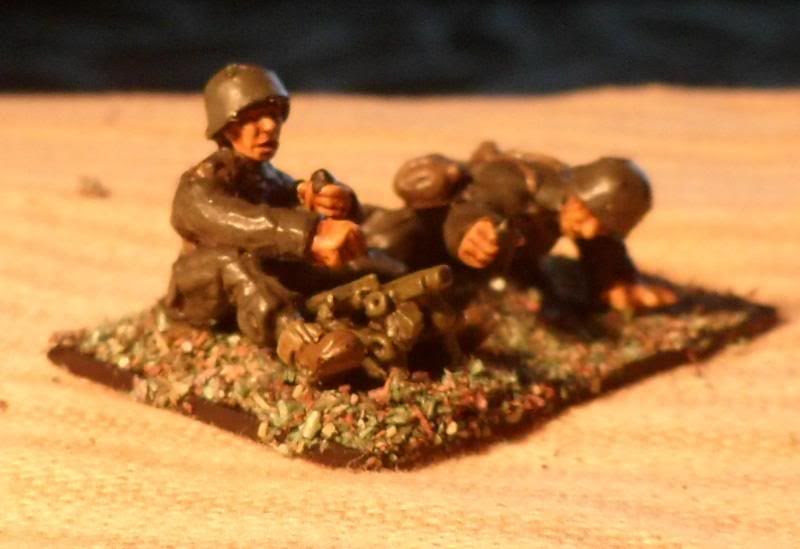 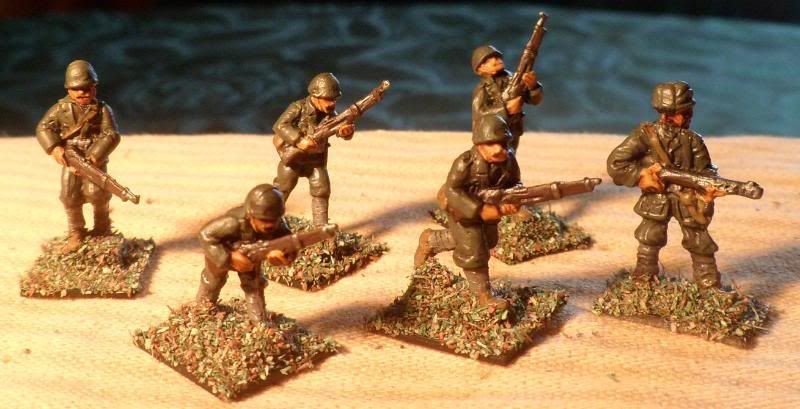 Operation Eilbotel
Tunisia, January 18-21st 1943
Early in January, Kesselring decided he was not going to allow the allies to build up and probe von Arnim’s positions at will. Once the front had stabilised preparations were started for a limited counter blow with the aim of clearing the Eastern Dorsales as far south as Robaa and the Karachoum Gap; also capturing the Kebir Reservoir (which supplied Tunis).
This sector was held by an ad hoc collection of French units part of Juin’s XIX Corps; the French lacked modern equipment and radios and the Germans were convinced this was a weak point of the front. A diversionary attack was also planned against the British around Bou Arada to draw off allied reserves and disguise the axis of the German attack. The attack was code-named “Eilbotel” – special messenger. 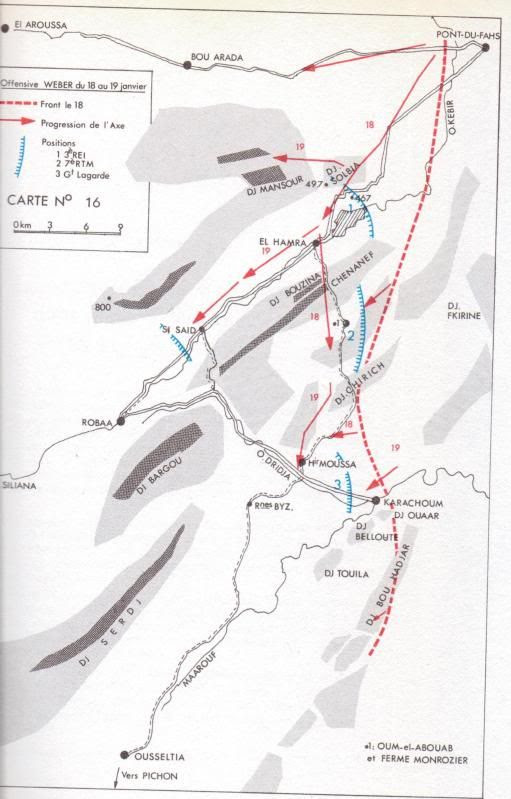 The German officer in command of “Eilbotel” was Colonel Friedrich Weber, his command for the counter-attack consisted of troops from 756th Mountain Infantry Regiment (334th Division), 10th Panzer Division, with Tigers from 501st Heavy Tank Battalion and 20th Flak Division.
I have decided to run this as a series of connected games using what figures and equipment we had to hand–
Scenario 1
El-Hamra & the Kebir Reservoir, January 18th
El-Hamra looking toward the reservoir 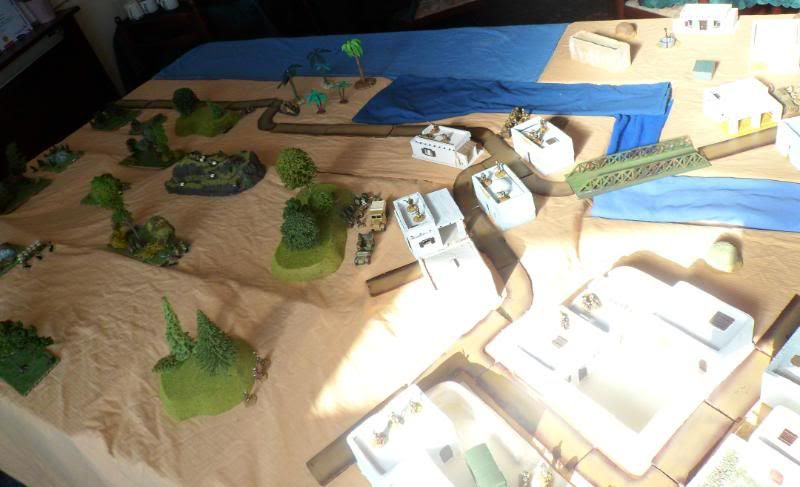 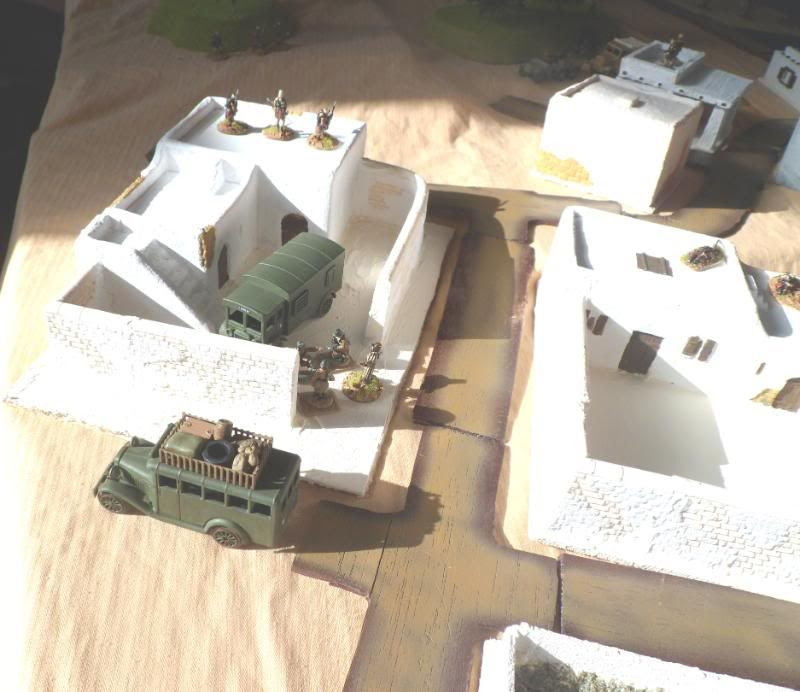 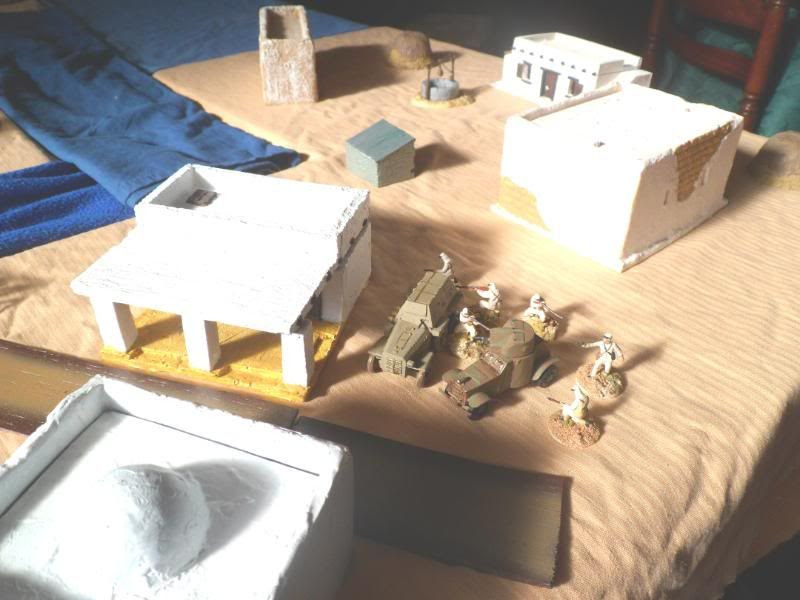 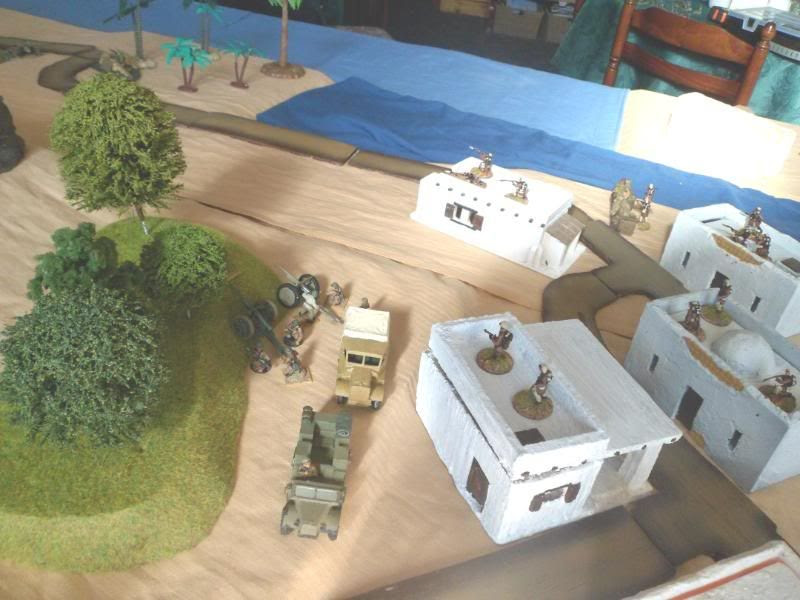 German forces must break through the French line in front of El-Hamra and capture the village and crossing point over the Wadi el-Kebir. II/756th are tasked with breaking the French line to allow the armoured elements of 10th Panzer through to continue the attack south towards Robaa.
German end of the table with the Kebir Reservoir and El Hamra off the in the distance. 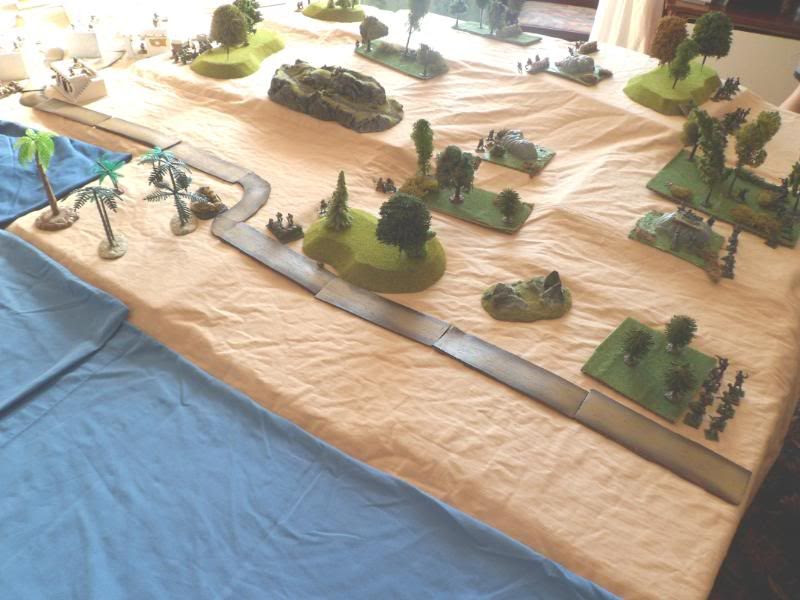 II battalion, 756th Jager Regiment
Assault pioneer company, 334th Infantry Division
Towed 75IG battery (756th Jager Regiment)
Support
105mm battery (off table)
2 x Stuka sorties
Arrive on table from Pont-Du-Fahs on turn 10
Elements of 10th Panzer Division with –
2 Kompanie/86th Panzergrenadier Regiment
2/I battalion 7th Panzer Regiment (panzer III)
4/I battalion 7th Panzer Regiment (Panzer IV)
Armoured car platoon of 90th recce
2 - platoons 10th motorcycle battalion
If the Germans breakthrough and destroy most of the French defenders before turn 20, this is a strategic victory.
If by turn 20 the battle is over, but the Germans have not yet moved major forces off table, this is a tactical victory.
If the French still hold portions of the village or river crossing, hence preventing further German advances south by turn 20, this is a strategic allied victory and leads to changes in scenario 3 below.
Fought over two and a half hours with my boys playing German and me the French. The game started slowly with a cautious advance by two companies of II/756th Jager Regiment. The German artillery began a systematic barrage against the western edge of El-Hamra with a plan to cut the road and prevent reinforcements rushing forward against their advance.
Jagers advance 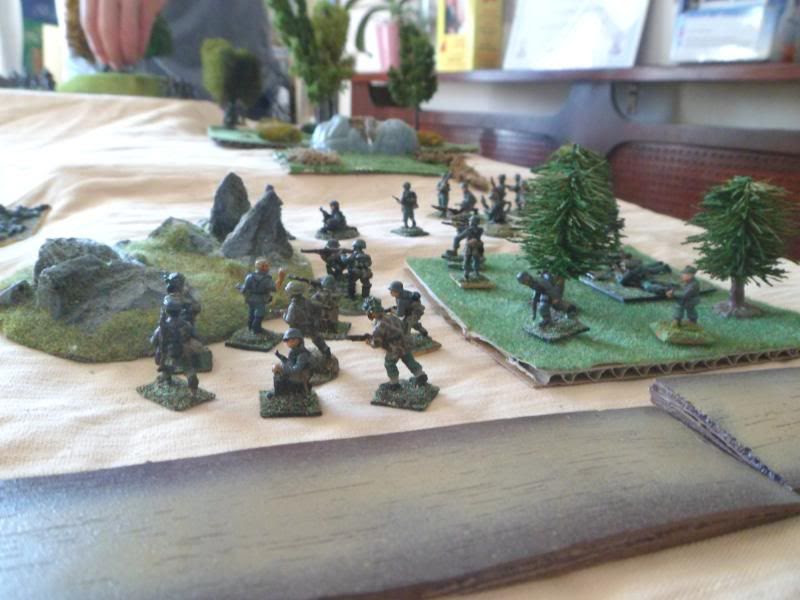 The Germans met stiff resistance from the Algerian company, supported by their attached 37mm anti-tank battery firing HE over open sights. The German advance was a snails pace, trying to avoid casualties, any attempt to rush the Algerian positions was met with accurate rifle and LMG fire.
By turn 4 the German commanders committed both their both infantry company and the Pioneer company in the hope of forcing a break-though later. The French were quite happy up to this point, I was slowly gathering legionnaires for a counter-attack and the Legion Cavalry Squadron was on the move. Then their artillery template finally landed across the cross-roads, blasting a couple of buildings and inflicted casualties on the Legion platoon based there – 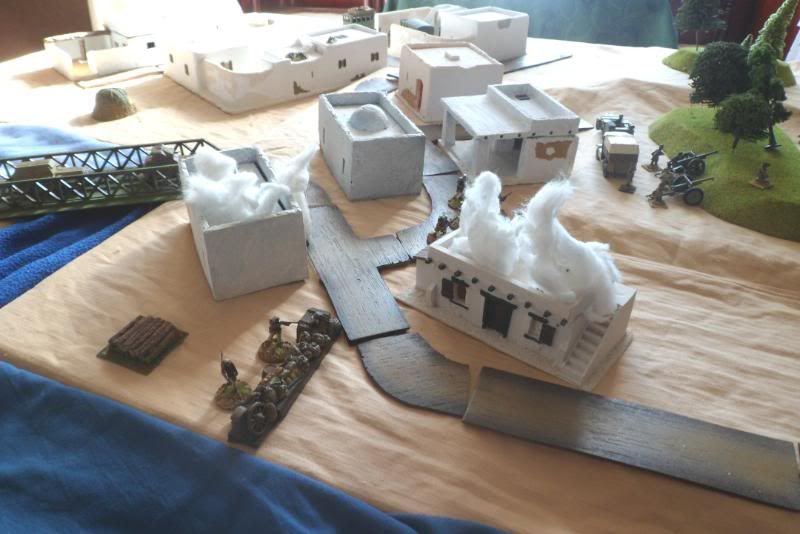 The following turn (5) when my Legion Cavalry unit tried to advance through the same area along the road; another salvo smashed down wiping out the VUDB carrier and then following through into an infantry platoon forming up nearby!!!!! 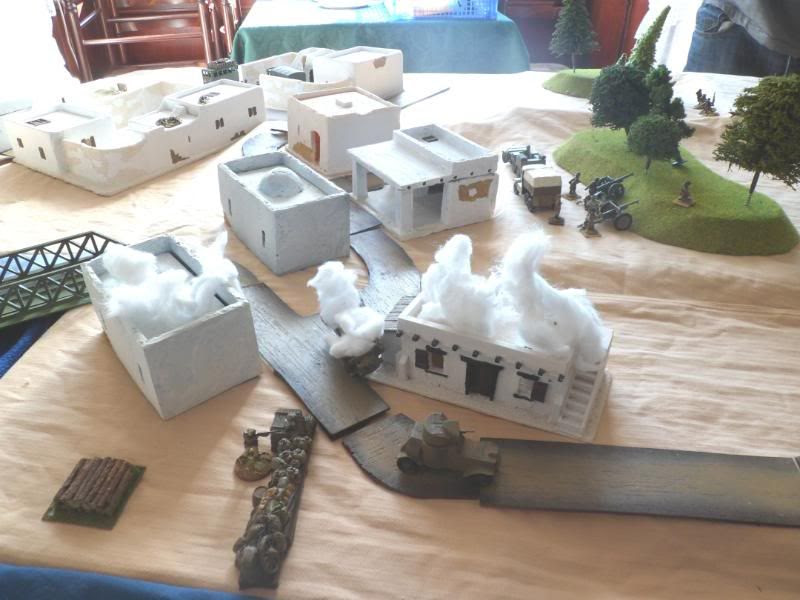 The next 5 turns saw the German infantry slowly advancing upon the Algerian positions, I had made the error of spreading the company too thinly across the table, which meant once pieced, positions could be bi-passed (blinded by terrain from one-another! But with the support of my well concealed `75 battery and some good morale checks I was holding (mostly) and moved legionnaires forward to form a second line. 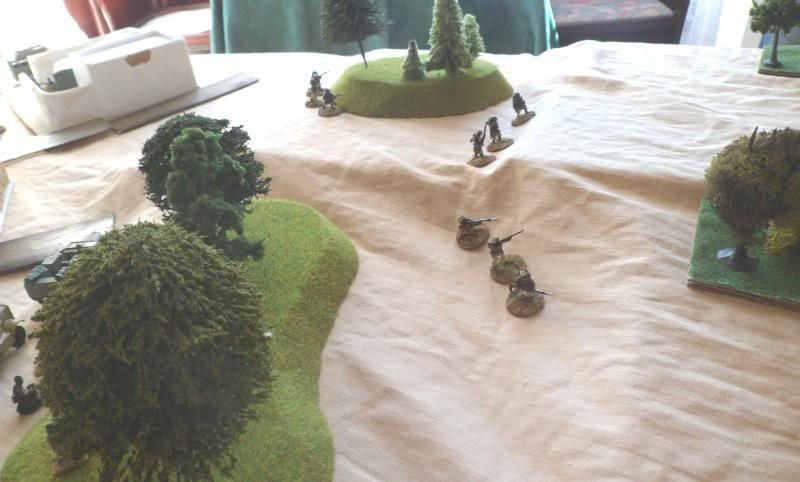 Turn 10, 10th Panzer arrived in the form of an armoured car platoon and motorcycle platoon. 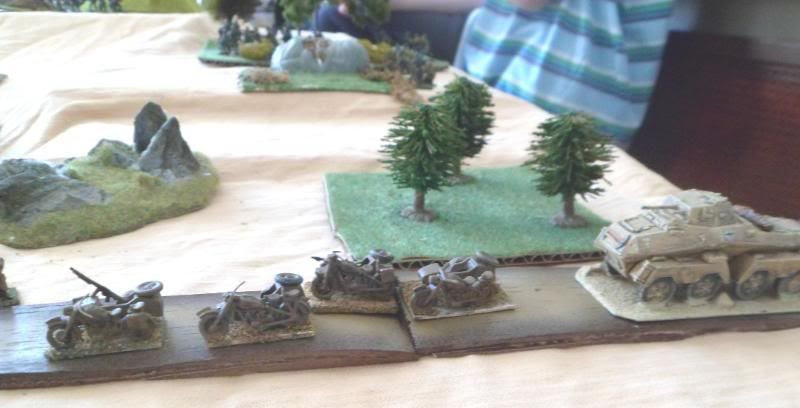 With the Algerians virtually gone I moved one of the `75s to fire upon the road, the Legion Laffly AC also joined the battle as a mobile pill-box. For the next few turns I delayed the German advance along the road with these two units whilst desperately trying to rally any infantry my officers could snag.
Turn 12, 81mm mortar fire directed from the infantry by the road scores a direct hit on the `75! The Laffly exchanges fire with the German 232 armoured car. 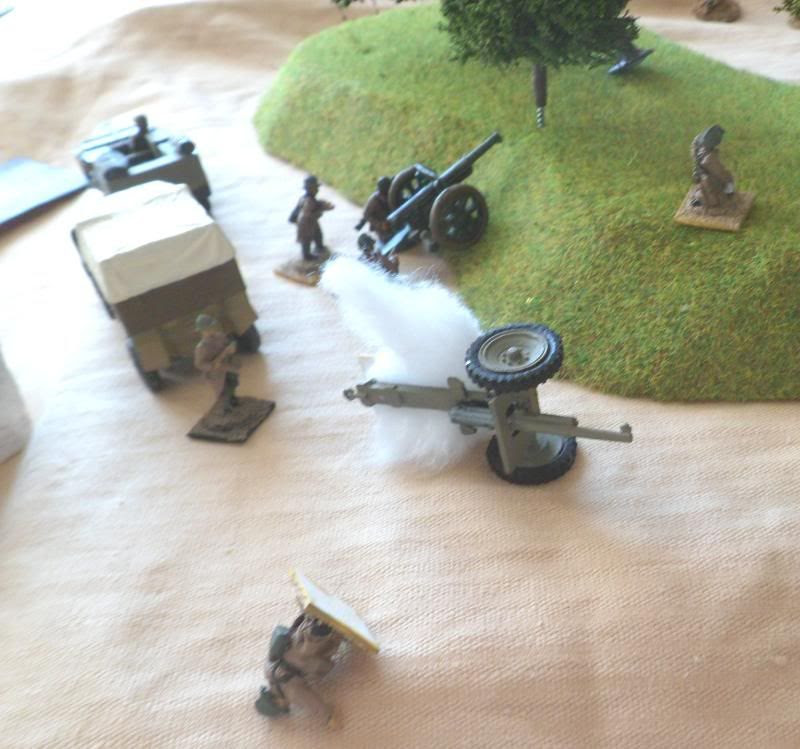 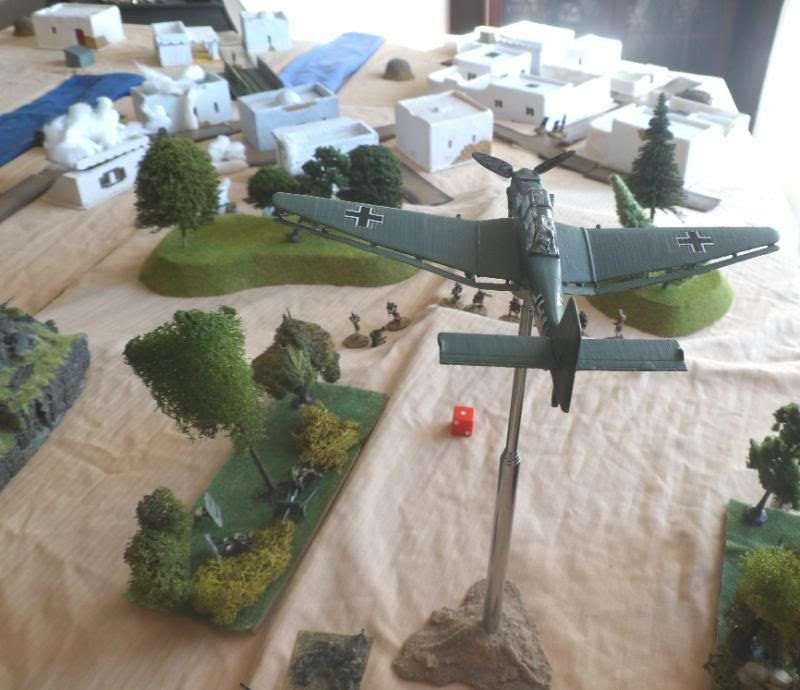 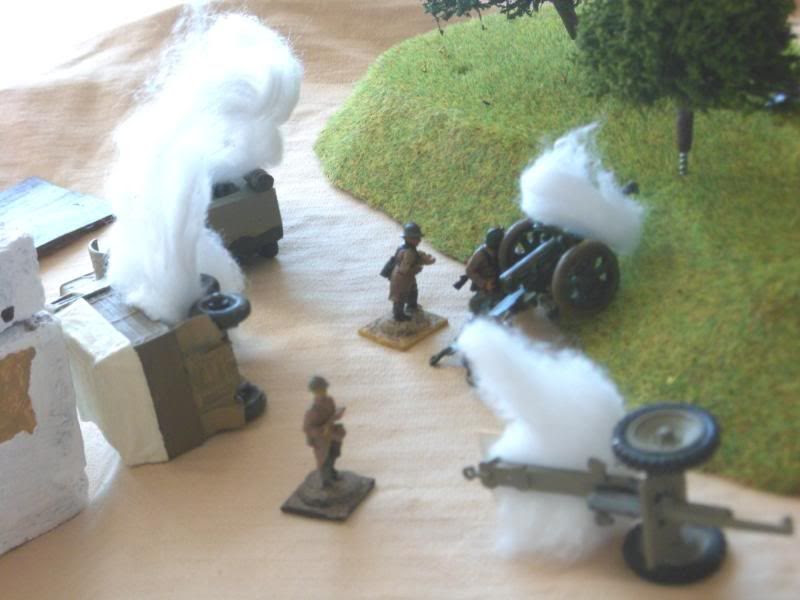 Turn 14, the Stuka strafes and Bombs my second line defences and the 81mm mortars manage to blow the Laffly off its wheels with a near miss (double 6 always kills in our rules)

Turn 15, its all over for the French, there’s nothing to stop the armoured column driving down the road and through the town, almost all the Algerians and Legionnaires are in full retreat after successive Stuka sortees. 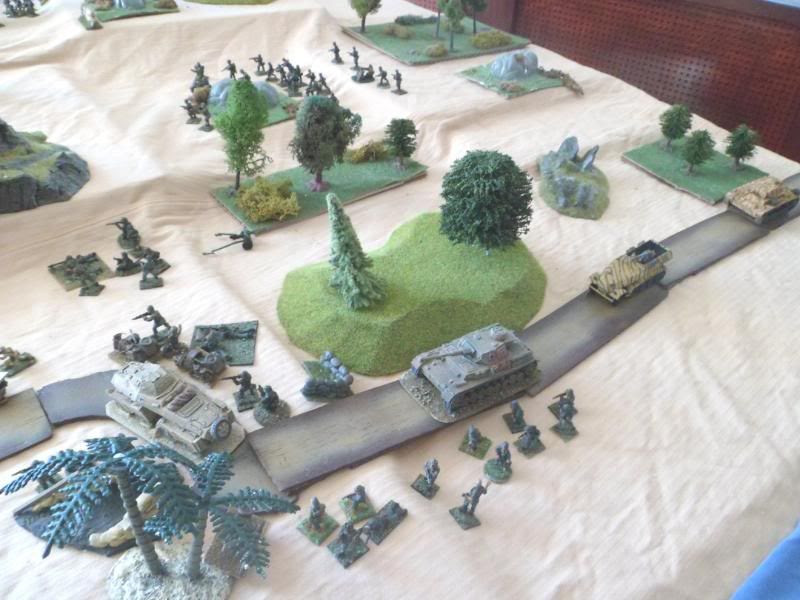 Whilst it would appear at first glance the French had no chance, if I’d been able to move those Legionnaires (who were caught by the artillery) forward, another two platoons of good quality infantry at that critical time may well have altered the final outcome.
Maybe too I should have withdrawn earlier to defend the town in a delaying move?
The lads were great again today, though I don`t understand why they delayed the Luftwaffe until so late, I would probably have used it up early blasting the Algerians or the town. What was interesting was they way they understood the concept of the campaign and realised casualties now, would not be available later – quite pleased with how they understood that 

Scratched together from various bits`n pieces.6pdr (venerable Airfix) with a MMS Ford WOT as a tow most of these figures are Reiver I think? 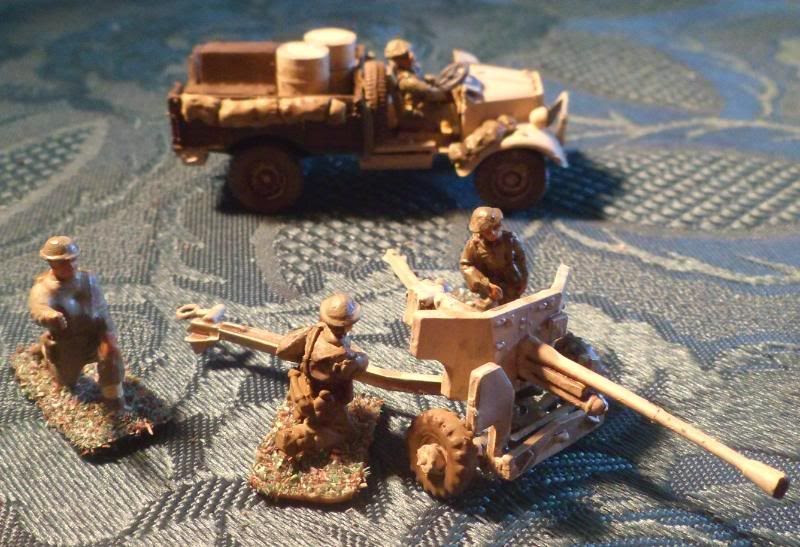 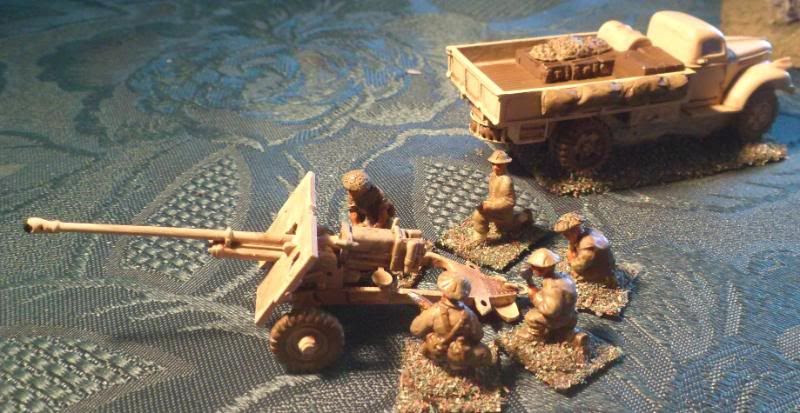 Should give 10th Panzer something to worry about

This has taken quite a while to "get off the ground", things have been quite stressful with moving my Mum and its put strain on out already busy home/business life. I`ve been loathed to do painting/modelling or even mention wargaming with all the extra stuff going on

But I`ve finally started -Command/Communications section (a mix of Reiver and SHQ, some minor alterations) 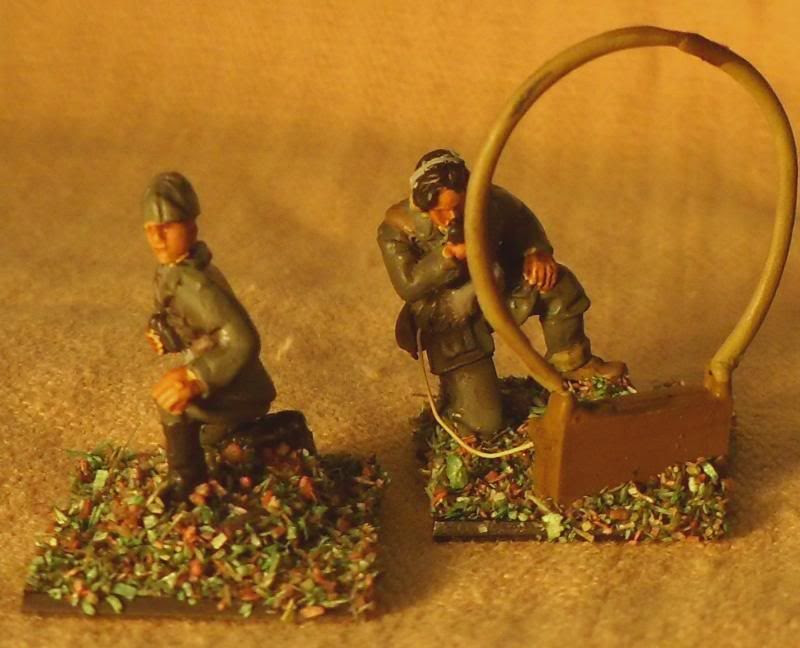 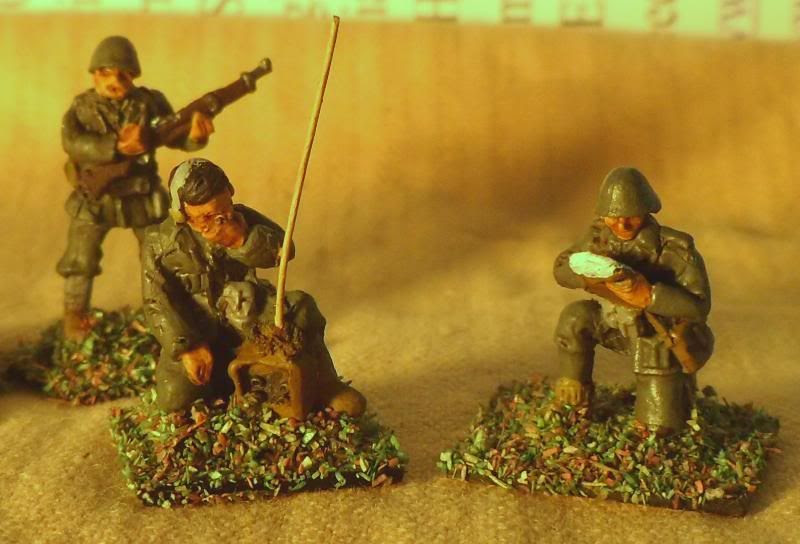 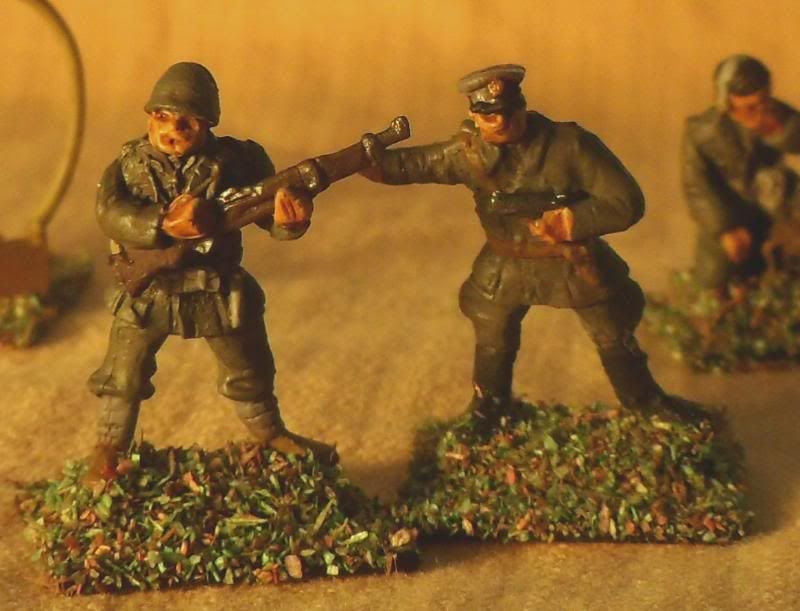 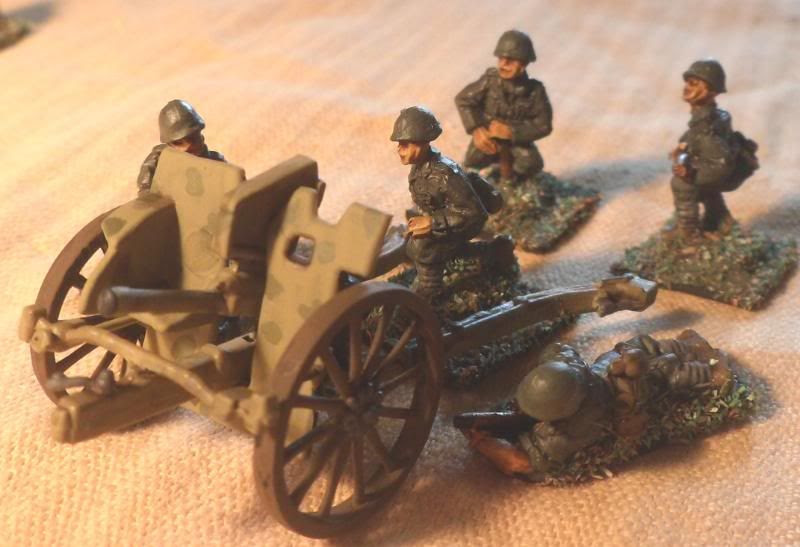 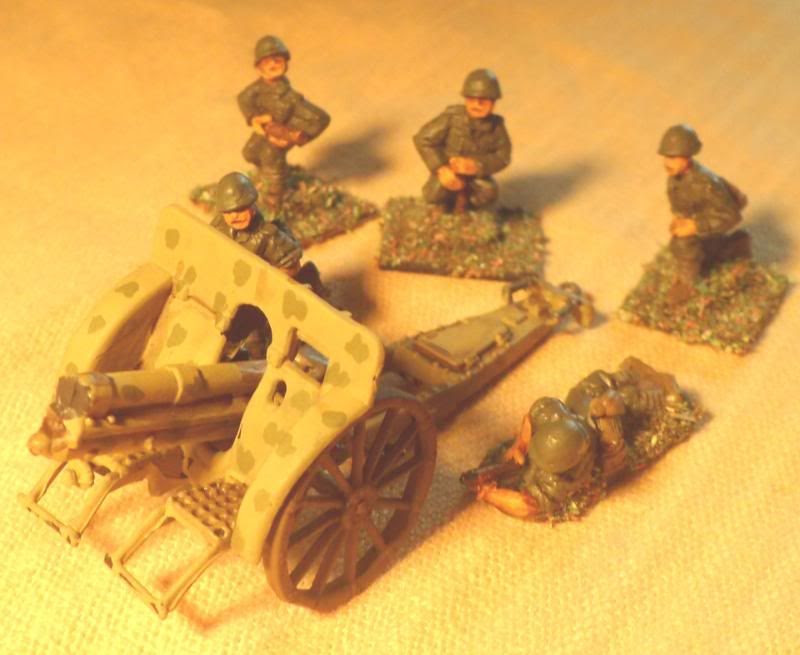 First of the infantry (3 packs from SHQ) 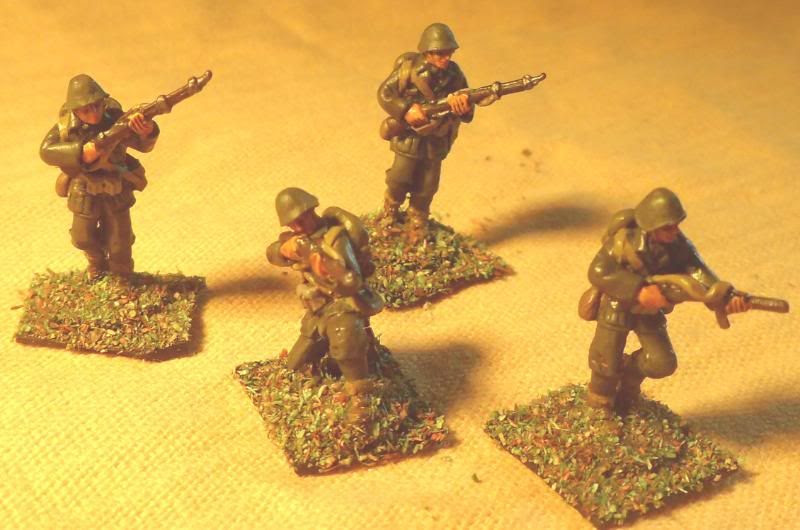 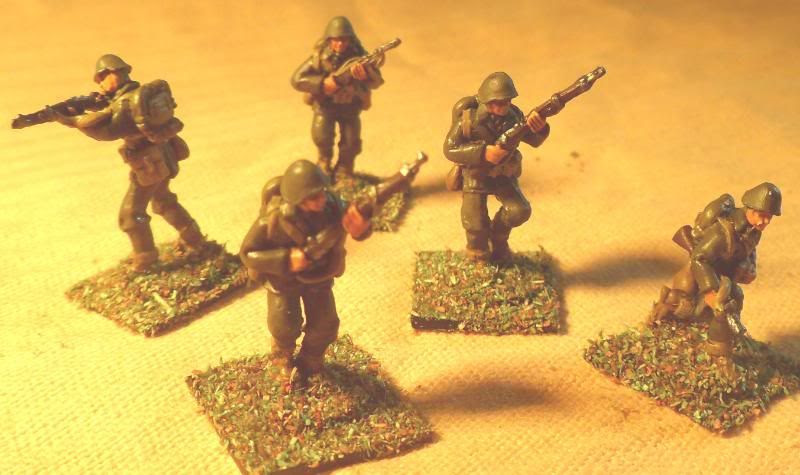