Way back in my teens I came home from school to find my Dad had thrown out my entire collection! Hundreds of plastic figures (metals being far too expensive for me back then) and dozens of plastic kits and di-cast models, to say the least I was devastated. This of course put an end to my wargaming hobby until in my early twenties, whilst working in Cardiff I wandered into a games shop and saw "Bastogne", an A4 campaign booklet for Command Decision rules by Frank Chadwick and Greg Novak. The booklet had some colour and B/W images of 20mm models and soldiers, painted and set-up for battle; this brought back memories of the illustrations in the books by Charles Grant, Terrance Wise and Don Featherstone; this one chance discovery drew me back into models and eventually wargaming.

For the first few years my hobby fixated on Bastogne and the Ardennes offensive almost exclusively, the desperate fighting in the mud and snow between German and American units of varied abilities has much to attract the wargamer who likes challenging games yet doesn`t want the Allied air superiority to dominate the battlefield. Part of the battle which fascinated me most was the first few days where US infantry, surprised and outnumbered, managed to hold back the might of 5th Panzer Armee, just long enough for SHAEF to scrabble its reserves forward to bolster the line. Without the dogged defence and sacrifice made by these men (long overlooked) 5th Panzer Armee may well have reached Bastogne before the 101st airborne and the outcome of the battle changed dramatically.

Now many years later I find myself with a big collection and a wargames room in Spain with a permanent 8x4` table. My lads and I try and have a game whenever we are there for more than a week, so for Christmas 2017, I decided to revisit old ground

History
The 28th Division held the southern half of VIII Corp`s front. The three regiments were deployed along its frontage: the 109th in the south, 110th in the centre and the 112th in the north. The 110th Regiment (Col. Hurley Fuller) was actually responsible for about half of the divisions total frontage! The 110th also had to make do with only two of its three battalions on the line, as the third had been taken by division and held in reserve! The Regiment`s only option was to hold a series of isolated strong-points, blocking roads for any enemy advance. These were supplemented by active patrolling during daylight and advanced listening posts overlooking the Our River.

On the German side General von Luttwitz`s 47th Panzer Corps  was tasked with seizing crossing points over the Our River and capturing the strategic road junction of Bastogne, then moving onto the Meuse. The frontage for his initial plan with two divisions corresponded almost exactly to the defensive frontage of the 110th Infantry!

The game
Taking advantage of our larger table in Spain I have decided to run this historically based game, set during the first few days of the Ardennes offensive. Concentrating solely on the battles and area concerning the I (and later II) battalions of the US 110th Infantry Regiment. The game offers an interesting challenge with the Germans having to move across difficult terrain against an entrenched alert enemy.

The game starts at 0800 some two hours after some intense artillery, mortar and rocket fire has smashed down across the 110th strong-points. All I Battalion positions were hit - Heinerscheid ("A" Company), Grindhausen ("D" Company)- both north, off table as far as our game is concerned north and Marnach ("B" Company), Munshausen ("C" Company) and Reuler (Battery "B" 109th Field artillery). This barrage not just caused casualties and damage but cut all the telephone wires leading between positions and back to the rear, effectively cutting off each unit from both Battalion and Regiment plus one-another! The barrage lifted after about 30 minutes, but additional short salvos persisted over the next couple of  hours.

In the early hours of December 16th 2nd Panzer Division began sending its panzergrenadiers across the Our. After struggling up the steep valley sides through thick under-growth and trees and a minefield they finally arrived at their jump-off points for their first objective - Marnach, the time was 0800.

German orders
2nd Panzergrenadiers are spearheading the attack, your orders are to seize Marnach and open the roads to the Clerve River bridges ahead of the armoured and mobile elements; awaiting completion of engineer build bridges over the Our river to the East.
The weather is cold and wet with low lying fog, the terrain rough and very wet, all this has combined to delay the progress of your lead units, but finally you are in position to attack.

Use combined infiltration and direct assault tactics to achieve your objectives.

US orders
Your Battalion holds a series of company sized forward outposts along the ridge overlooking the Our River (the German frontline). Your orders are to set listening and observation posts during the day supplemented by combat patrols. These have a two-fold purpose: 1. Standard frontline field practice. 2. Training and acclimatising of new and green replacements into the companies, platoons and sections.

Your Division has been assigned to this quite sector of the front to recover and refit from the mauling it took during the battles for the Hurtgen Forest region. Many of your soldiers are fresh replacements and those remaining veterans are worn to a thread.

At about 0530 this morning all your frontline outposts were hit by quite heavy artillery, rocket and mortar salvoes. Virtually at once all communications to the rear and other outposts ceased as the shell fire cut telephone cables; you are on your own!

You decided to stand your men on alert and the Germans continued to shell your positions on and off over the next few hours, between shelling the sounds of heavy vehicle traffic drifts across the valley from the east (the German side).

About thirty minutes ago your scouts reported hearing men moving up through the wooded hillside towards the road which runs along ridge (known as Skyline Drive), this is it...... 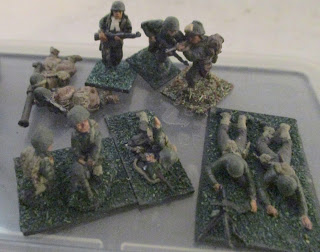 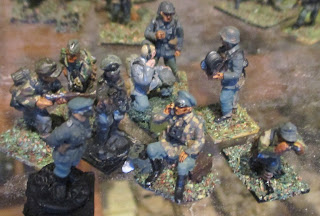 Our table
Left side with Munshausen in the background 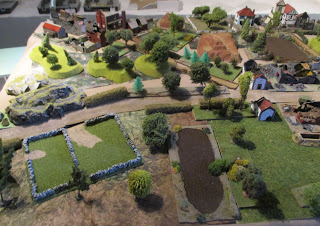 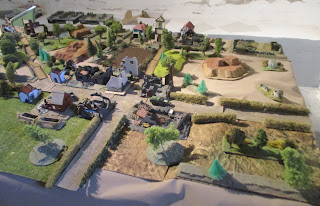 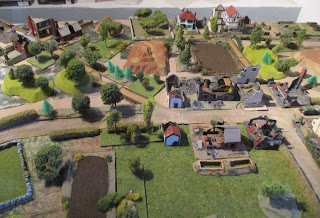 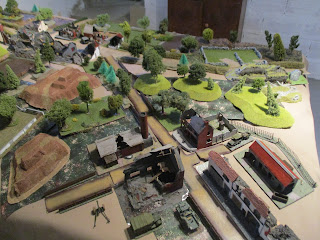 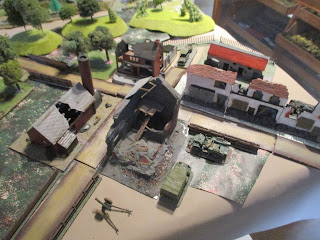 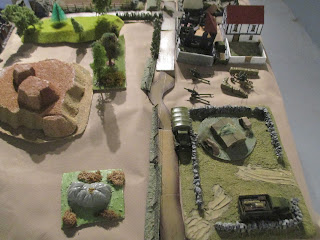 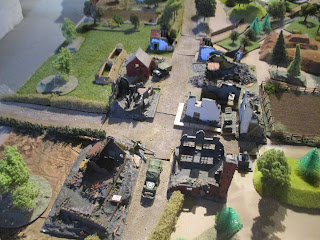 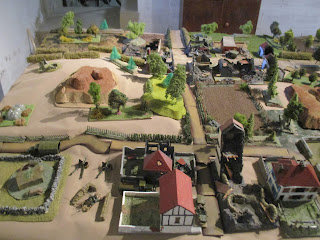 The initial moves saw the German 1st Battalion or 2nd Panzergrenadier Regiment (2nd panzer) advancing slowly towards the US positions. My dispositions in attack was 1st Kompanie reinforced with a pioneer platoon would attack Marnach head-on with 2nd Kompanie on their right (north) with orders to advance to the road then pinch in and envelope the town. 3rd Kompanie on the left (south) was to move up to the road and cut it preventing US forces from moving reinforcements into the town. Both 2nd & 3rd Kompanies bolstered by a Panzershreck team. 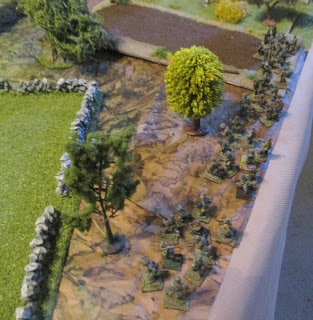 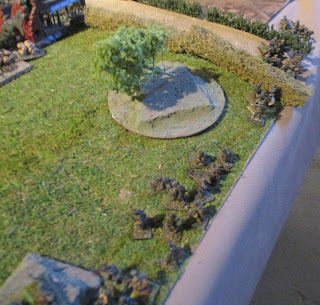 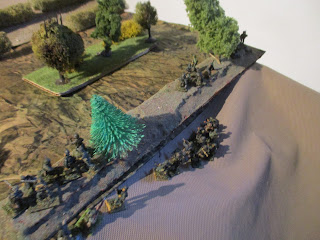 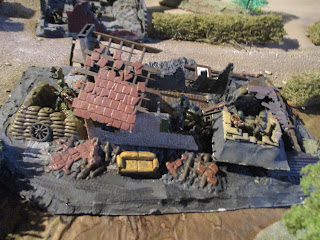 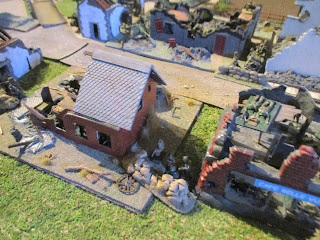 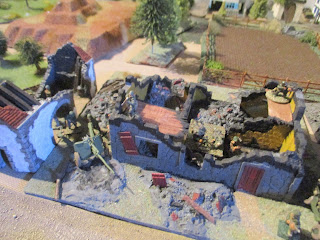 Supported by the artillery battery in Reuler 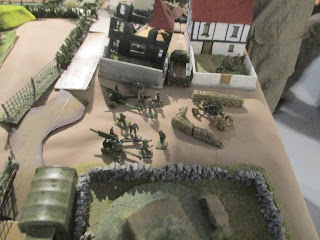 And "C" Company in Munshausen 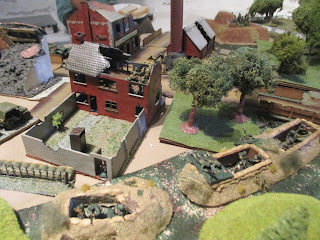 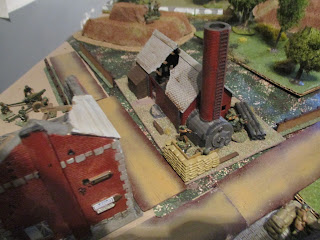 1st Kompanie and the pioneers walked into a world of hurt! They barely got off the start line before moral sapping casualties occurred. Their right most platoon, eventually joined 2nd Kompanie as it moved out of the line of fire. Though the CP did bring in some directed artillery fire causing some US casualties.
2nd Kompanie had more luck with one of its platoons stumbling onto a weak point in the US defensive plan, this was quickly exploited by a second platoon supported by the arrival of the survivors from 1st Kompanie; this caused the Yanks to fall back across the highway.. 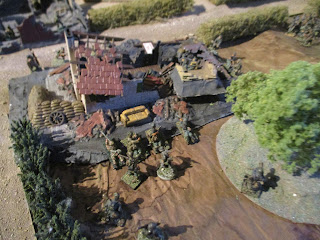 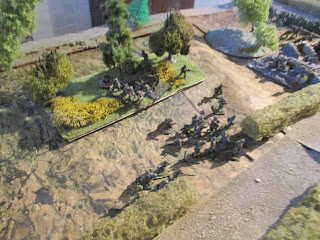 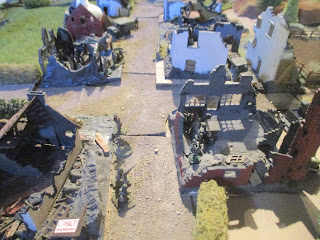 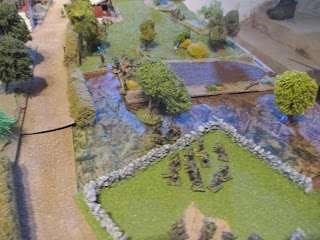 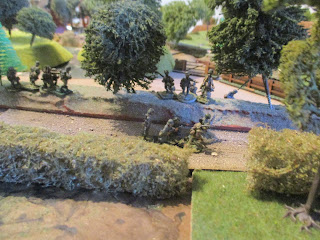 By 9.30am (turn15) 2nd Kompanie`s CP crossed the highway and advanced to the crest of the ridge along with one platoon cleared the ridge and began bringing directed fire onto Battery "B" in Reuler; who almost immediately bugged out.............
The rest of 2nd Kompanie plus the survivors of 1st Kompanie moved into the town, fighting house to house against the defenders.
By 10am (turn 20) the Yanks held just one house and with the German 2nd Battalion about to arrive, we called it quits. 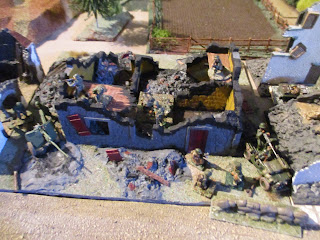 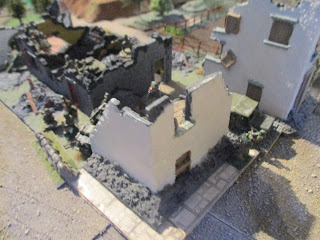 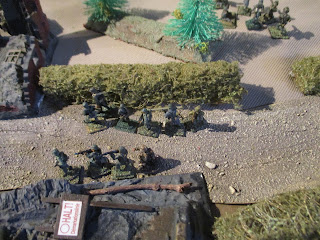 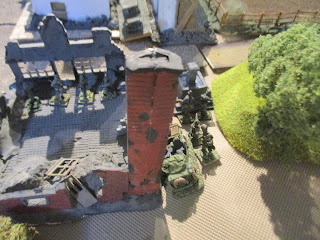 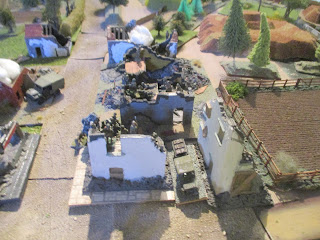 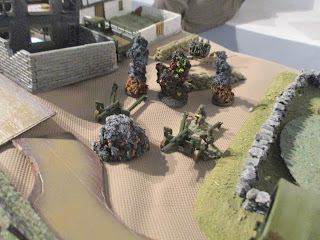 Tough if not impossible task for the Americans to hold Marnach, the boys agreed that without artillery support there was no chance of the remaining "B" Company guys holding off a new fresh battalion long enough for the 707th tanks to arrive at Munshausen at 11am. But one US company had effectively destroyed a German one and blooded two others in the process. Historically when the tanks drove from Munshausen to Marnach on the afternoon of December 16th, they found no evidence that "B" Company was still there and the place was full of Germans.........