After my earlier attempt, I altered my approach. Whilst i ran the game the same, I haven`t given a blow by blow account only a summery of what happened and took far less images (both saved a lot of time and speeded up the game).

This session begins on turn 7 where we left it last time.

The French decided to spend a few turns re-organising their troops, on the left the armd infantry platoon along with the engineer platoon was reinforced but by the armd infantry support weapons platoon, these would be supported by a Sherman and backed up with the two M10s and the M4HTMC.

Along the road, the two Sherman were given infantry cover using the recce infantry platoon, the M8 AC also joined this group.

On the right the rest of the force - 2 Shermans, 2 M5s and most of the armd infantry (2 platoons plus the HQ) would advance towards and through the wrecked train.

During turns7, 8 & 9 the artillery FOO called down fire and pasted the wrecked train and its proximity. This cause multiple German casualties and basically broke the defence on the right side of the table. Note the armd infantry transport which was left here and not driven like battle-taxis as you often see, note also the 57mm which dug in here in case of the need to cover any withdrawal. 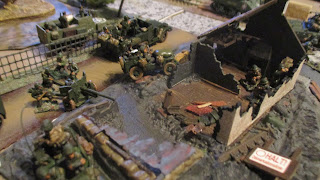 General French advance down the right side of the table 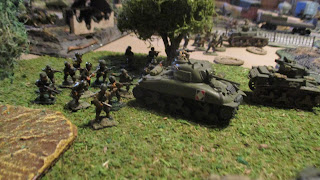 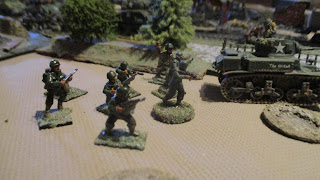 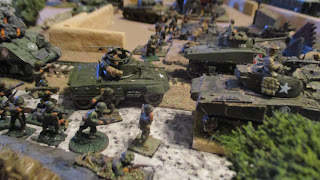 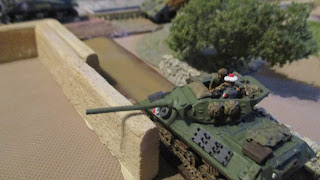 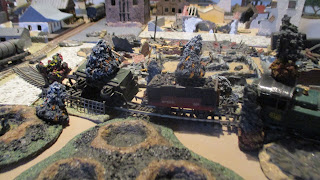 Turns 9-11 saw a general French advance, with an equally general German withdrawal, MG positions and emplacements put up brief resistance only to be blown to bits by the Shermans.

A brave Panzershreck gunner took out the leading Sherman on the left on turn 10 and its mate caught a shell from the Marder III on turn 11 - neither German lived to brag about their success however. 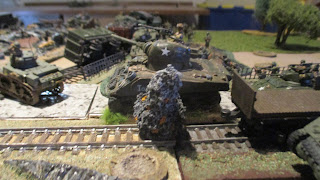 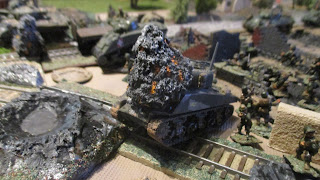 Turns 12 - 14 saw the German infantry on the left abandon the railyard and retreat towards the river or off table leaving the French infantry and engineers victorious. The French recce infantry occupied the station in the centre of the table supported by the two light tanks whilst the Shermans and infantry headed toward the larger factory buildings on the right. 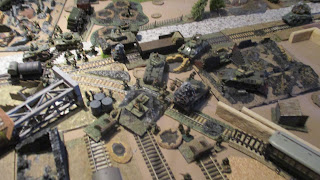 Turn 14 also so the arrival of the 9th Panzer battlegroup, which split into two attack groups. 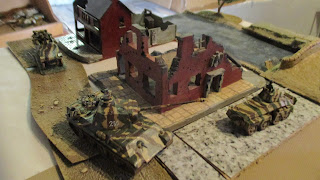 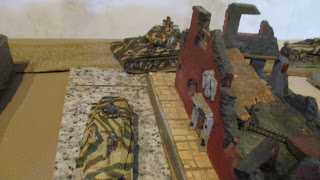 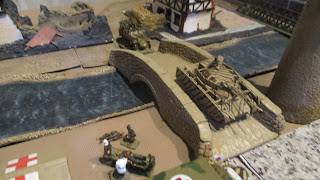 The Panther duelled it out with the two Sherman on the right knocking out both, their short 75s failing to penetrate. Luckily the French artillery FOO was on hand and brought down an accurate strike on turn 16 which not only KO`d the Panther but caught the Panzergrenadier 251 too knocking it out and causing casualties! 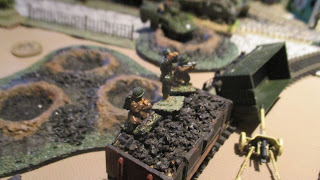 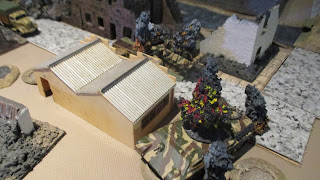 The Sdkfz232 advanced towards the station supported by a scratch unit of infantry only to be met by the two light tanks & recce infantry, the AC was also engaged by the recce Bazooka team - the result was pretty definitive. The advance was stopped cold. 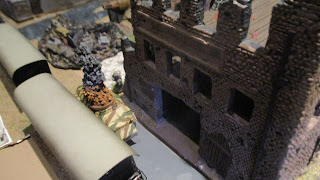 With the loss of the Panther and 232 the German commander gave the withdrawal order.

On the left side of the table the Panzer IV and panzergrenadier platoon formed a rearguard as the infantry remnants withdrew into the town, the French having lost most of their armour already didn`t pursue with any serious intent - the end.

I was a little over ambitious in the game set-up and parameters, just too big and complicated. It has been literally 20+ yrs since I played meaningful solo games and in recent yrs playing with my lads, our games have got larger and more complex to both challenge them and the rules. I need to scale back for next time and begin smaller with more defined parameters. The rules are fine and work well as always, the trick is not getting bogged down in the minutia and keeping it fun.