In the spring of 1924 Abd el Krim decided it was time to spread his influence more into the western part of the protectorate. He sent one of his commanders Mohamed Ben Othman with some of his "Regulares" across the zone to stir up trouble and hopefully insight the local tribes into joining the general rebellion against Spanish rule. Their first target was the position at M`Ter, followed by a series of swift darting attacks on outposts and  ambushes of convoys along the River Lau, a natural barrier where the Spanish had formed a frontline. 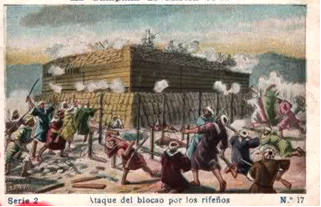 The position was part of the defensive line set up by the Spanish along the River Lau, it was about 9 km from the coast.

Square-shaped, surrounded by a stone wall and barbed wire, it had a garrison of thirty-seven soldiers belonging to Regiment de Infanteria Serrallo No 69 and three communications specialists: a corporal and two soldiers of Engineers, responsible for a heliograph. 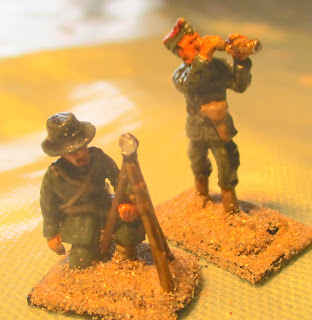 The position also had two look-outs, the whole thing set in a rough triangle on a hillock some 200m high over- looking the gorge of the Lau some 200m away.

Due to its elevated position the post did not have its own water supply and had to be re-supplied by regular convoys.

June 24th: Water convoy fired on and a sergeant wounded

June 28th: A new watch commander: Lieutenant Agustin Gil de Vergera arrives to take over (the posts had a rotation system on a month on, a month off). Due to the sudden increase in Riffi activity the standing officer Lieutenant Francisco Pueyo Ayneto (who had been in command since May 31st) elected to remain at his post; as de Vergera had seniority; Lt. Pueyo assumed the role as second-in-command. Sniper fire and general harassment had increased to a point where it was no considered unsafe for men to leave the relative safety of the position; so messengers could no longer be sent out; the siege of Cobba Darsa begins.

The most common tactic of the Berbers was to isolate an outpost, then dig-in (Paquear in Spanish) and let your enemy weaken because of the lack of food and water, casualties would also add to the pressure and effect morale of the defenders. Of course this would not prevent a direct assault being made if the opportunity presented itself with minimal losses to themselves.

Over the next few days the position comes under regular and increasing levels of fire, casualties mount and Lt. Gil de Vergera himself is badly wounded in the leg. The Riffi dig their own trenches to surround the position, but are unable to launch a direct assault due to the terrain. Also the Spanish because of their heliograph were able to keep in contact with their own side and using this call on artillery support from their nearest base at Tisgarin, whilst not accurate this shelling helped disrupt Riffi preparations.

The Spanish airforce also helped out by flying some quite daring low-level missions in support of Cobba Darsa. The aircraft forced by the river gorge and high peaks were well within normal rifle range and the planes ran a gauntlet of bullets whilst trying to drop blocks of ice; packets of medicines and bandages; foodstuffs or ammunition (including grenades) onto the position. They of course also assisted the defense with strafing and bombing attacks against the Riffi.

June 30th: The Breguet XIV (No 112), piloted by Warrant Officer Infantry Mr. Julio Pina Garcia and manned by Lieutenant of Engineers Manuel Bonet Ulled is shot down; the plane crashed just outside the perimeter of Cobba Darsa. Lieutenant Pueyo called for volunteers to try and rescue their comrades - as to fall into Riffi hands usually meant an awful fate for any Spaniard and especially airmen for whom the natives saved their "special" tortures! So under heavy fire, only accompanied by one of the Engineers; the brave Lieutenant charged out to the downed aircraft; unfortunately both were already dead, killed in the crash! The lieutenant and engineer ran back to the position closely followed by the Riffi, emboldened by downing the plane, they took the opportunity to launch an assault! The Moors reaching the remains of the wrecked plane, set it on fire and then moved on the Spanish perimeter throwing hand grenades as they attacked. Lt. Pueyo led the defense and the Riffi were driven off though only after some violent hand-to-hand combat. Warrant Officer Garcia`s plane was one of four shot down during the siege! 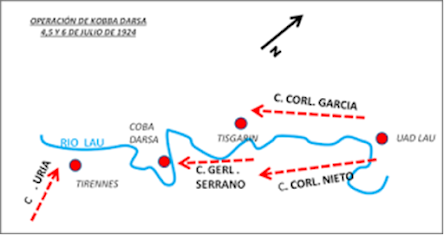 Meanwhile The Spanish command was gathering its forces in order to break the siege.

July 1st: Col. Garcia Fuentes was in command of a substantial column out of the base at Uad Lau. The column consisted of two tabors (battalions) of Regulares; three battalions of peninsula infantry, a squadron of regular cavalry, two batteries of artillery plus service troops. The column found itself faced by a determined enemy, well entrenched and well supplied with ammunition; Col Fuentes was forced to break off his advance and withdraw to Tisgarin.

July 4th: The Spanish try again, this time a much larger effort -

Right bank of the Lau (moving out of Tisgarin): Col. Garcia Fuentes` column as before

Finally in a wide encircling move to the south in an attempt to distract or draw off Riffi reserves and prevent others moving towards the Lau valley from the direction of Ibujaren and Tirinnes a third column under Colonel Uria with: Three tabors of Regulares, a bandera plus two companies of Legionnaires; a mountain battery, a company of sappers and service troops. 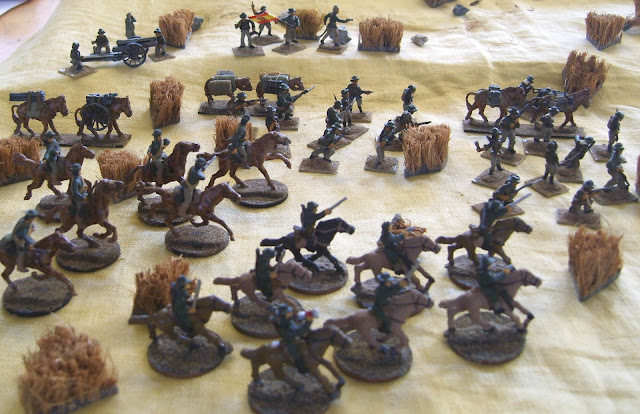 Spanish columns on the move
But again it was unsuccessful, even with such a large force, well supported by artillery and aircraft, the Spanish columns made little headway and were unable to break through. The Riffi (estimated to be around 2,000), inflicted significant casualties: sixty-two dead and three hundred seventy-one injured. So some of the units dug-in and built blocaos (block houses) to maintain contact whilst rest of the force withdrew to Tisgarin.

July 5th: Eduardo Gonzalez-Gallarza carrying out a risky low level supply mission was subjected to intense ground fire and was seriously wounded, despite this he managed to get himself, his plane and rear gunner back to base safely. His heroism was rewarded with La Cruz Laureada de San Fernando.

July 6th: Commanding General of Ceuta, General Bermudez de Castro arrives at Tisgarin to take personal overall command of the relief. Supported by several batteries and up to thirty aircraft started to pound and soften up suspected Riffi positions. Unlike previous attempts, a column under the command of General Serrano Orive was to make a direct frontal assault straight at Darsa Kobba. The attack led by 1st and 5th Banderas of La Legion commanded personally by Lt. Col Franco; supported by 3rd Groupe de Regulares with 2 tabors (Ceuta and Larache) and two peninsula battalions (Vizcaya and Otumba).

The attack was successful and the Riffi defender melted away into their hills to fight another day. The siege had lasted 11 days and cost the Spanish nearly 500 casualties (over 100 killed!). Finally Lieutenant Gil de Vergara and Lieutenant Pueyo and their exhausted men could be relieved. In recognition of the bravery shown by the small garrison in holding their position against a superior force, they were awarded the Military Medal Collective.

I`ve run a few blocao games since I first got interested in the Rif War. Set your table with the position at one end, the Spanish relief column start from the other end and must try and force their way across the table. The Riffi start concealed in dug-outs or entrenchments, these defensive lines will follow the lay of the terrain using gullies and ridges plus scrub and woods to catch the advancing Spanish with flanking and crossfire. The Spanish have to try and use their superior numbers and fire-power to bust through the lines; but they must also be aware of their casualties! Limit the number of moves, set point penalties for casualties taken, see how it runs; these games can be played again and again, slightly changing the terrain (crossing streams under fire is a bitch) or the forces involved.

The attempt by Lt. Pueyo to rescue the downed pilots would make an interesting one-to-one skirmish game. Place the downed plane a couple of moves outside the perimeter of your blocao and then have Lt. Puevo and a few men race out and try and rescue his air comrades. To make things interesting, one or both crewman could still be alive and will need help back to safety. The Riffi of course will be trying to stop the rescue, you may have desperate hand-to-hand combat or self sacrifice in order to see the pilot safe.

I game this period in 20mm (my favoured scale), my Legionnaires are mostly BUM plastics, mixed with Bandera, Barcino and Irregular Miniatures, with some conversions and head-swaps to add variety.

Regulares again are a mix of Bandera, Barcino and Irregular Miniatures; but I also use Tumbling Dice WW1 Turkish troops in fez as they have a very military look.

For Riffi tribesmen I use various plastics with turbans and cloaks added from plasterscene, Turban wearing Regulares from Irregular and Bandera and WW2 Goumiers (only rifle armed figures) from Friend or Foe and Blitz.

The actual siege and battle for the position would suit a one to one skirmish game in 28mm too.

This is the only conflict I do in this larger scale as I have a bit of an obsession. I have Riffi and Spanish from Askari Miniatures and Rif Raf both of which do a quite nice ranges. I recently bought some miniatures from a new Spanish company called Baraka which are very nice and the owner Borja Perez de Lema is expanding the range. The company has also released a set of skirmish rules for the period which are available in English and Spanish.

The Betrothed of Death by Jose E. Alvarez