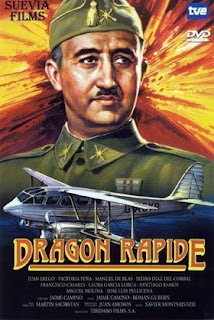 Is a 1986 Spanish movie directed by Jaime camino.

Basically it is a docu-drama about the events leading up to the July 1936 coup d`etat focusing of General Franco.

Franco is in the Canary Islands, but with the imminent military coup he needs to get to Spanish North Africa to take command of troops there who`s officers are almost entirely behind the coup. In order to achieve this a Spaniard supporter of the proposed coup living in London hires a plane (a DH89 Dragon Rapide) in England with the plan to secretly fly it out  to the waiting General so he can then be transported to Africa for the start of the uprising! The film focuses on just the last two weeks leading up to Franco`s flight.

The film flits back and fore between Brigadier Emilio Mola trying to organise the uprising from his HQ, we see his attempts to gain agreement from the various anti-Republican factions - Carlists, Monarchists and his own people in the armed forces.

In London Juan de la Cierva (inventor of the autogyro - see my earlier piece on the Dedalo) is asked to obtain a suitable aircraft to ferry an important passenger from the Canaries to North Africa.

In Madrid a young newspaper man overhears men talking about the upcoming revolt, tells his editor, but without proof the editor refuses to publish anything! The Government is more worried about strikes and the Anarchists than they are about the possibility of a military coup, "the Army are loyal to Spain" says the editor!

In the Canary Islands Franco, his wife and daughter swelter in the July heat, the disorganised nature of the plotters is getting on his nerves! Plans are made, then changed, even codes are being changed and messages sent to him cannot be deciphered, he is NOT a happy General! 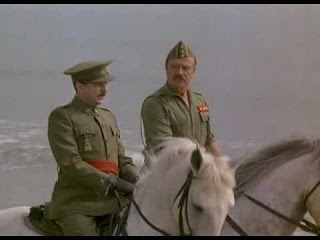 While all this is going on de la Cierva has hired the plane and flown it via France and Portugal to Casablanca in French Morocco under the guise of a hunting trip for a rich Englishman.

Back in Madrid key supporter of the revolt Jose Calvo Sotelo leader of the far right CEDA party is assassinated! This actually gives the rebellion a boost as they now have a martyr to rally the various factions under one banner!

Finally with just days to spare the plane touches down in Las Palmas, messages are sent and the Army of Africa revolts followed quickly by the garrisons on the various Canary Islands under Franco`s command. 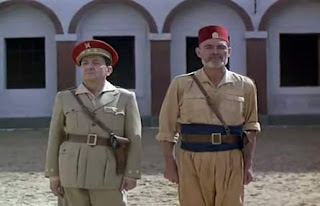 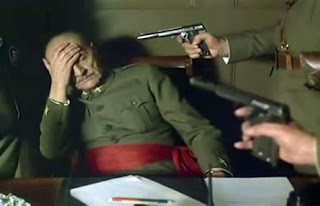 Franco wearing civilian clothes carrying a fake diplomatic passport flys to Casablanca and the next day onto Tetouan.

At this point the film ends at the very begining of the Civil War.

On the whole an interesting historic docu-drama, well acted and nicely filmed. Whilst not a war movie there were plenty of soldiers and sailors with some excellent period uniforms, for those of us who like that sort of thing.

The DVD goes for silly money on Ebay (£9.99 + postage) I was lucky enough to pick up a copy here in Spain for a Euro (bargain) 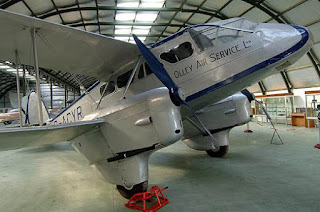