A tale of three M60s 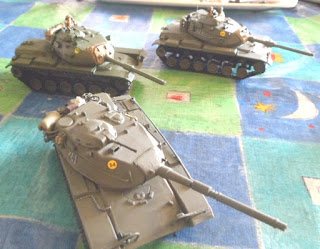 What now seems like many years ago a young innocent editor wrote a short article comparing plastic model kits of the M60A3 tank (Journal #64); now along come our old friends at S&S and produce a resin/white metal model of the same beast. I`ve decided to reprint the original article here along with my review of the new S&S Models kit and some photos of all three models together.

I decided to build a 1990s Spanish Mechanised Cavalry unit (don’t ask why – you just don’t want to know). I already have the Mech. Infantry and their M113s but I needed a couple of M60A3 MBTs to complete the unit.

The M60A3 was the final version of the M60 of the 1960s and first appeared in the TO&E in 1980. The tank proved very capable and versatile and served in during the first Gulf War alongside the newer M1 Abrams. The supplied the M60A3 to several allied countries – , , and of course .

I wanted two kits and was lucky to find them from different manufacturers – Esci (thanks Rolf) and Revell. Having not built any kits in quite a while, I found building them an interesting challenge, so thought I share my thoughts with you all. 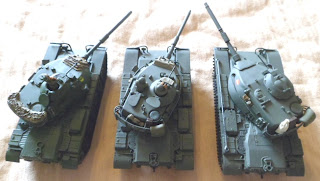 Esci – M60 A3 (kit 8317)
This kit is quite old, one of the last set of releases by Esci. The kit has the hard plastic multi-part track link system (which I’d not tried before). The instructions are well laid out and easy to follow, there were 95 parts in total - 63 of these being the track, wheel, lower hull assembly! The track assembly actually went together quite well, I followed the advice I got from The Guild forum guys – “All the ones I have done have some larger pieces of track in them, start with these on the bottom, and work towards and round the idlers and sprockets with the smaller pieces. Once you've got round the idlers and sprockets, put the remaining large piece on the top of the wheels, and then work towards this from one end. Finish off from the other idler end to the large piece, and any snags/gaps will be hidden on the top of the track hopefully”. (Thanks John J)

The upper hull is nicely detailed and fitted well onto the lower (I only had to do a little filling); once glued you can add the tow hooks and headlights, which complete the hull. The turret is very plain as far as detail is concerned, a few periscopes, indicator lights – that’s about it. The commander’s mini-turret can swivel independently of the main; its .50cal can raise and lower as can the main gun. The turret is completed by a set of stowage baskets at the rear. I decided not to add the square searchlight mounted above the main gun (I have not seen this on any Spanish M60s). I nice kit, if a little plain, my one major criticism is that the turret hatches are moulded closed; I would have liked to mount a tank commander in the turret. To complete my model I added a tow cable, some stowage in the baskets, jerry cans hanging onto the turret sides and finally a pair of grab rails made from fuse wire along the turret sides. 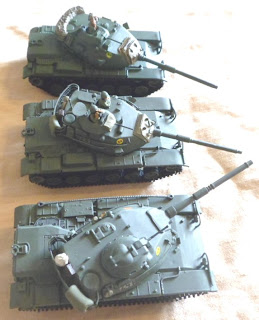 Revell - M60 A3 (Kit 3140)
As soon as I opened the box I saw this was a very different animal to the other kit. A Lot more parts (185), the level of built is just totally different – the lower hull/wheel and track assembly has 121 parts alone! Again I followed John Dowman`s advice when building the track system and as it was now was my second attempt, the results were neater and the tracks looked far better.

The upper hull had more detailing than the Esci model; there were also several little tools, hooks and bits to add too. Once again the upper/lower hulls fitted together well with only a little filling required along the seams.

The turret too shows far more detailing than the Esci kit, lights, periscopes, aerials, Smoke launchers, jerry cans, and stowage lockers; grab rails and handles and a tow cable; all quite fiddly but add to the model. Where this model does get tiresome is the shear number of little parts and sub-assemblies required – where Esci`s kit has a three-part assembly for the stowage basket, this kit has seven, which makes the basket very fragile. The main gun barrel is two parts – why? This just creates a mould line down the barrel length, which then has to be carefully filed to disguise. Strangely enough with such a complex kit neither the commander’s mini-turret .50cal nor the main gun can elevate! Like the Esci kit both turrets can rotate, but this time both turret hatches can be modelled open or closed.

To complete my model I again added stowage and this time a couple of crew figures from Liberation Miniatures pack USTANK1.

There were a few bubbles to be filled in the resin parts and a little excess which had to be trimmed before the parts fitted properly, but nothing terrible. All the white metal parts needed trimming and cleaning too, but this had more to do with the small size of the parts. Everything assembled easily and once cleaned and the kit went together in around 15minutes – a proper wargamers model.

There is a nice level of detail to the upper hull and track units and the model looks fine next to the other M60s I already own. Size-wise the model stands a little taller than my examples by Esci and Revell (maybe 1mm) and varies in length by about the same amount - virtually nothing!

This is therefore a fine addition to the M60 models available and compatible with other 1/72nd models you may already own and far easier to build than those with that multi-part track systems.

Shaun tells me they can also do the M60A1 as well, just a new gun barrel and no smoke dischargers and stowage boxes; and are also planning the M728 and AVLB variants.
www.sandsmodels.com

I painted all three kits US olive green and added minimal decals to the turrets – tank numbers in black (240, 241 & 242), the yellow bridge weight marker and I then painted on a Spanish flag.
I`d like to thank Rob Morgan for the pull-out he sent me from a Spanish magazine about M60 A3s in . 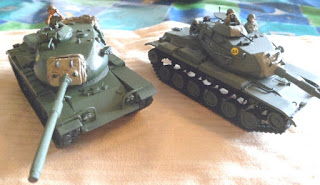 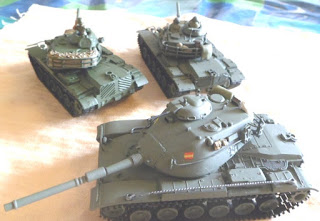 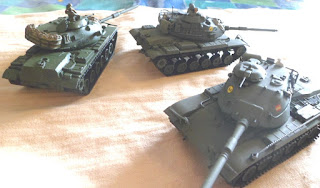