This is a historically based wargame; I’ve adjusted the forces involved to create a decent table-top game.

Historic background
On 8 November 1942, Anglo-American forces landed in Vichy French North Africa. The landings were divided into three areas, Eastern, Centre, and Western Task Forces. The American Center Task Force was given the objective of taking the port of Oran, Algeria.

On the first day of Torch, Task Force Red of the US 1st Armoured Division (mainly comprising of Combat Command B under Brig. Gen. Lunsford E. Oliver), landed to the east of Oran. With very little opposition, they took the coastal town of Arzew. Part of TF Red proceeded along the coastal road to Oran, encountering French defenses at the town of St Cloud (see separate scenario later). Another force under Lt. Col. Waters headed southwest to take the airfield at Tafaraoui, about 15 miles south of Oran, to deny French aircraft this landing area.

Consolidating themselves at Tafaraoui, and preparing for the next day's thrust north to seize La Senia Airfield, Col. Waters sent a combat team of some infantry reinforced with a few M3 75mm GMC tank destroyers to the foothills 6 miles south of Tafaraoui to cover the road to St. Lucien which leads southeast to Sidi bel Abbes (famously home of the Foreign Legion). Aircraft reconnaissance had reported French armour and infantry operating in these hills and the combat team represented a rearward screen protecting tomorrow's offensive operations.

It was dusk when the combat team set out and by darkness they had reached a dried up riverbed in the foothills. The combat team commander decided that this was far enough and ordered his platoons to take up positions on the western side of the riverbed. The American movement had not gone unnoticed; French scouts had reported on their progress and later in the night, covered by darkness, French infantry moved into positions on the eastern side of the riverbed. From about midnight, the green American infantry were plagued French artillery falling around them, obviously an indication of registration of targets. To add to the American unease, in the distance could be heard the high pitched squeak of tracks and the low rumbling drone of tank engines.

The French build up and potential counter-attack into the exposed American flank so worried Col. Waters he detached a ad hoc column from his force already moving on La Senia under the command of Capt. William R. Tuck of 1st battalion, 1st Armoured Regiment to rush back to Tafaraoui and then south to bolster the screening force.

Historically, the French were beaten before they started, the GMC 75`s along with infantry mortars laid down fire which broke up the French advance and the arrival of the several M4`s with their powerful 75mm guns and good armour smashed the weak Renault and Hotchkiss tanks. American piloted Spitfires flew strafing sorties and completed the route, leaving around fourteen smoking wrecks behind them.

For our game, I decided on a US screen and French attack with the US relief arriving after 6 turns + 1D6. It was decided that only if the French managed to get significant forces off table before the relief arrived, this would be a French victory.

The Anglo-American landings have thrown the Vichy commanders into confusion. On November 8th US forces seized Tafaraoui Airfield, thus preventing our aircraft from using it and also allowing access to the field and facilities to their own aircraft. In St. Lucien the local French commander has gathered what troops were available for a concerted counter-attack.

View of the table looking north towards Tafarouri 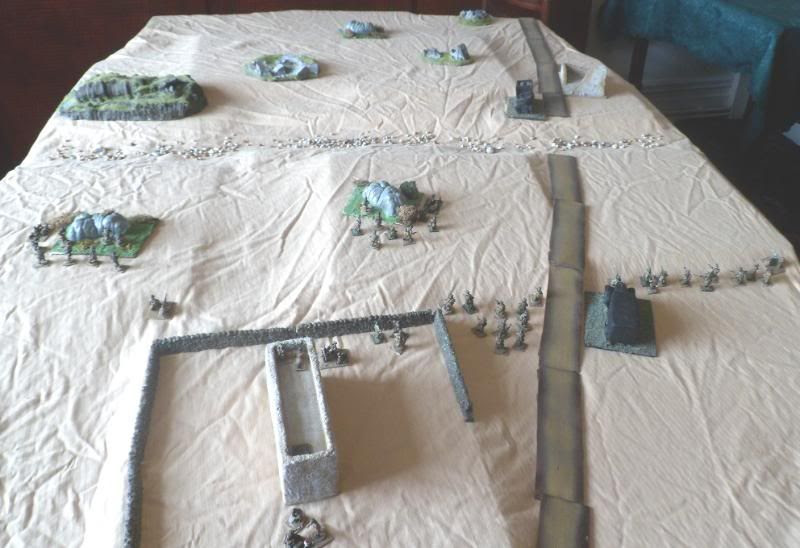 French OP is the farm, this OP caused most US casualties during the battle as it had unrestricted views over the entire battlefield. 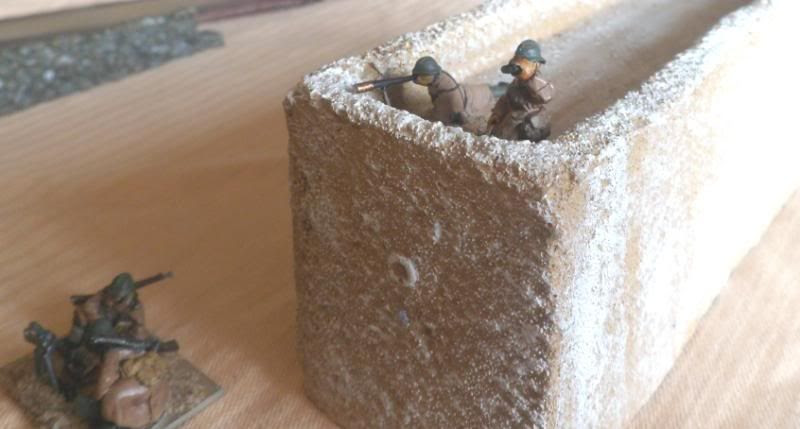 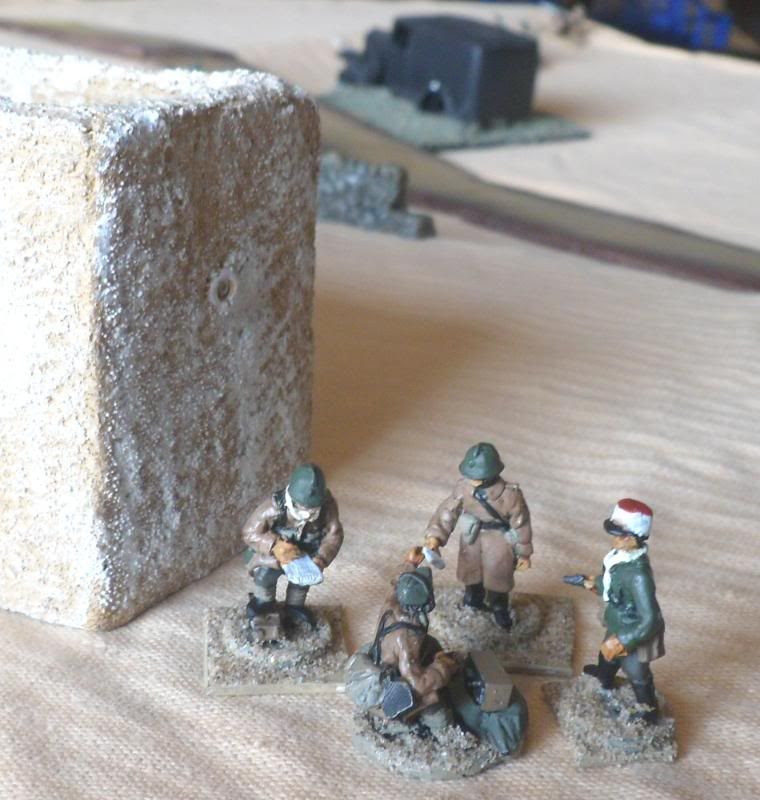 French armour advancing up the road from St. Lucien 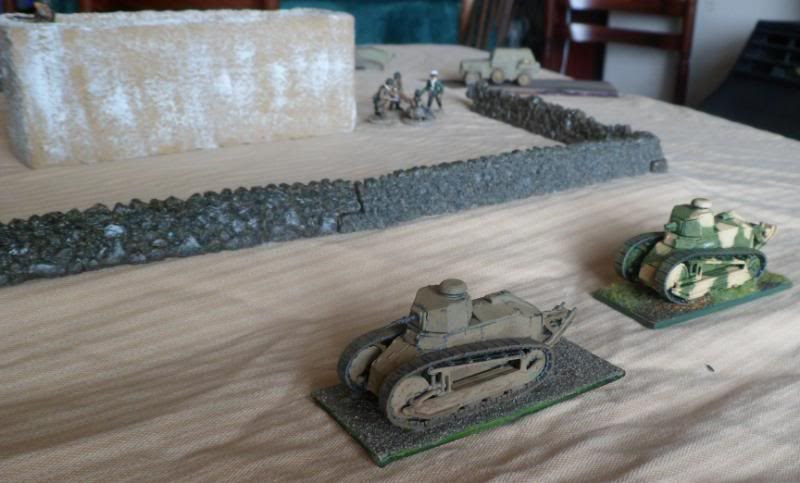 US defenders on the right

French armour engaging US infantry across the dried river bed, the burning Laffly AC is the first victim of the GMC75 Later the same turn and an Ft17 also burns 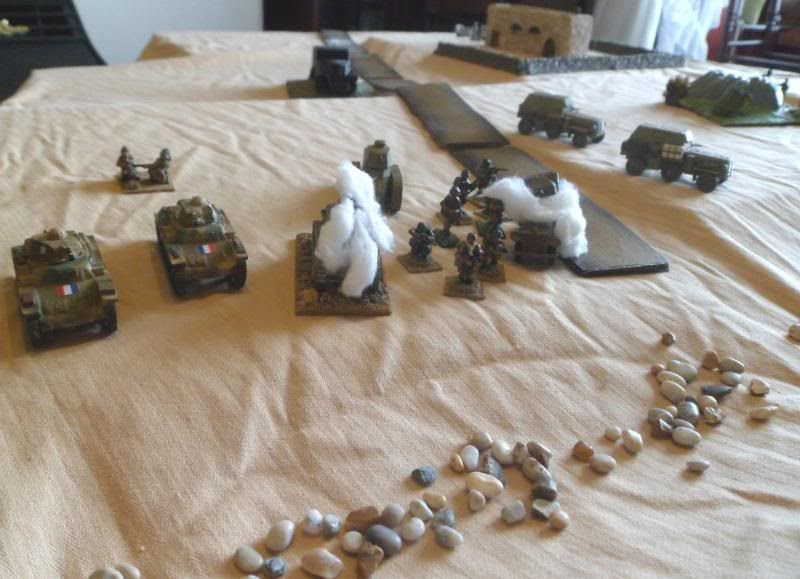 Berliet VUDB carriers of 1st REC race off road to get to the center where the infantry are breaking through. 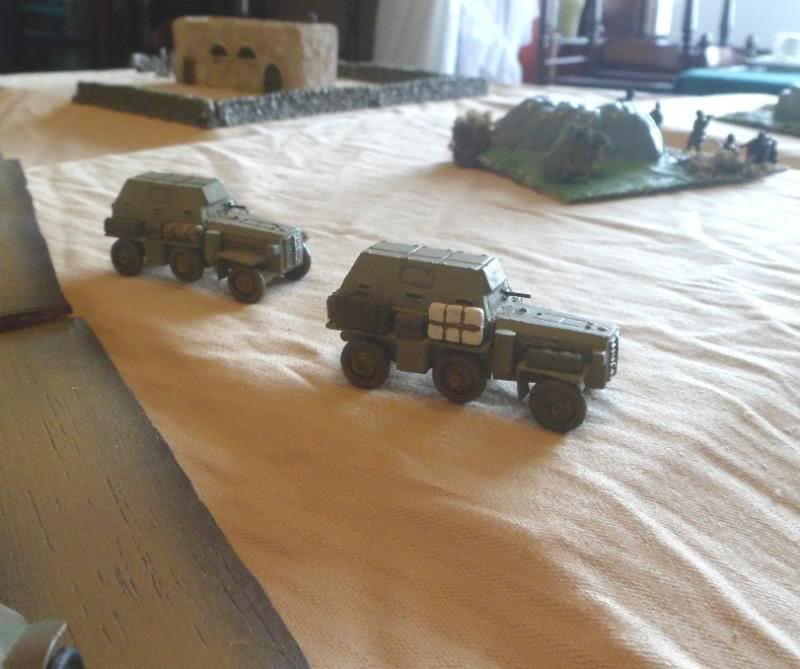 High water-mark of the French attack 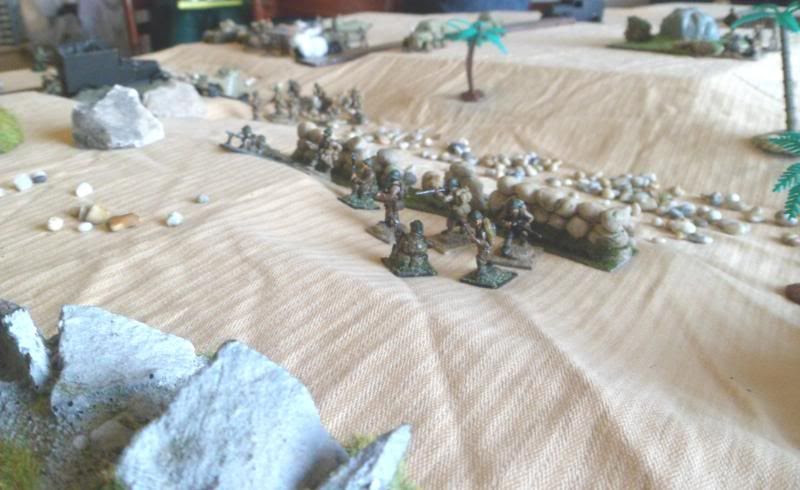 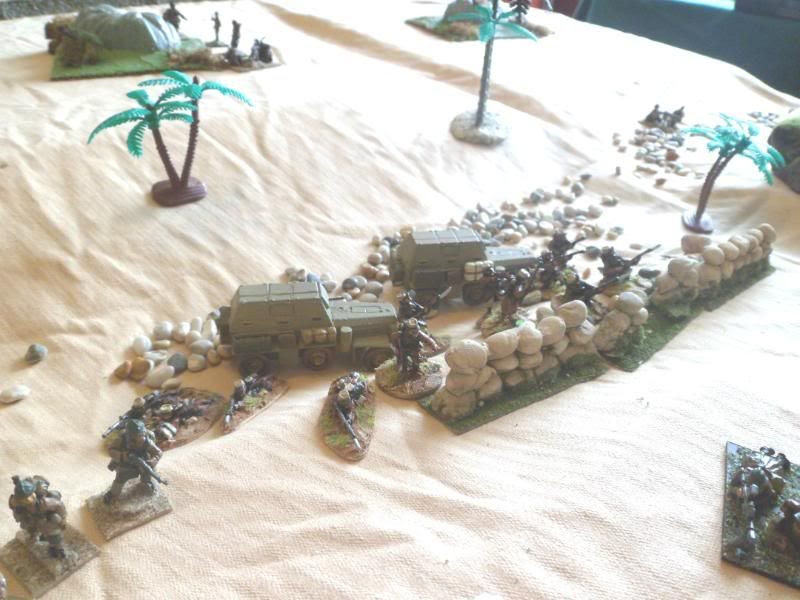 62e BCC support the infantry breakthrough on the far left, but too late 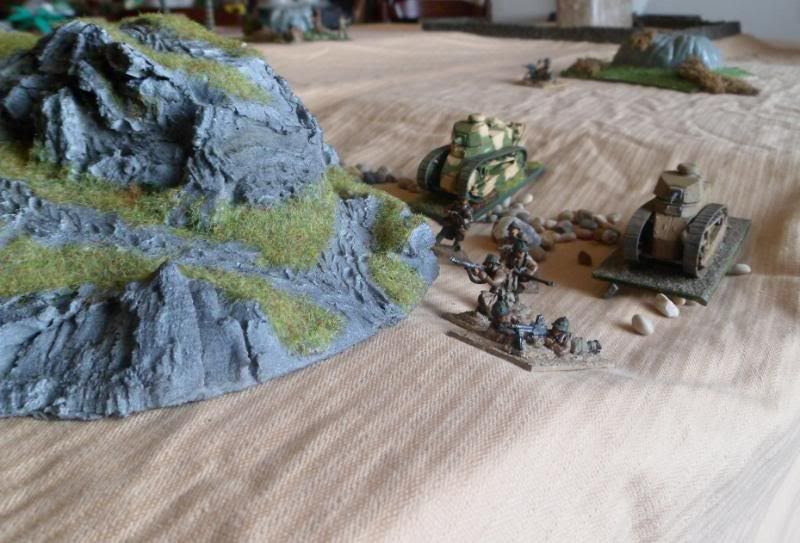 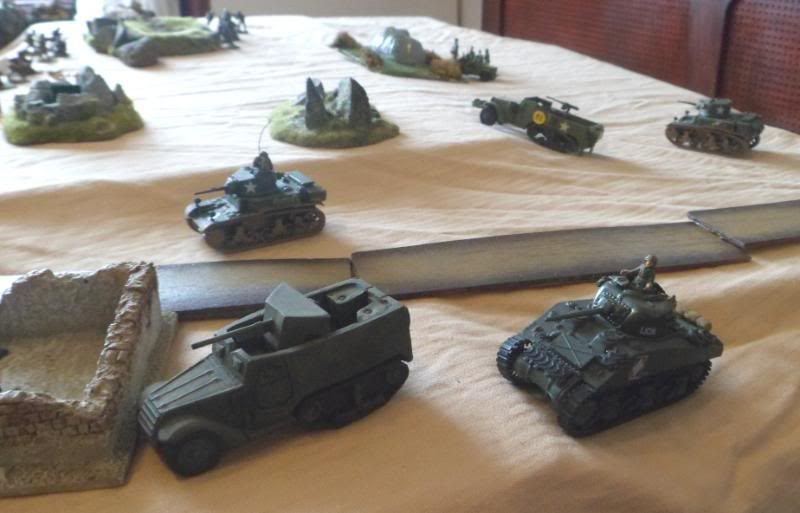 And the French armour burns! The game opened with the French infantry moving to the attack supported by their `75 battery, the armour started on the table base-line. The US players, my boys Alex (14) and Chris (10), had been allowed to dig-in their platoons along the north bank of the dry river bed.

During the first few turns the boys used their 60mm mortars to try and break-up the French infantry platoons. The sight of all that massed French armour caused some panic among my young opponents

By the end of turn 3 the `75s had weakened the US center, but a radio message informed them at a flying column had been detached and was on its way (but not when).

Turn 5: saw the French infantry reach the river bed and their tanks were now in a position to support them, firing their Hotchkiss MGs and 37mm cannon at any visible defenders; the leading Laffly A/C of 1REC was destroyed by the US GMC75, this caused the rest of 1REC to leave the road and fan out.

Turn 6: the French `75s targeted the GMC75, it destroyed the first Ft17! The second Laffly was knocked out by a rifle-grenade too this turn! On the plus side for the French, 2ere Company or 62e BCC slipped around the US right and most of three infantry platoons were now on the north side of the river. Unfortunately 1D6 came up 1 and at the end of turn 7 Team Tuck would arrive – bad luck and the beginning of the end for the French…….

Turn 7: the GMC knocked out another Ft17, but had its own paint scratched by a couple of near misses from the French artillery, the two H35s cross the dry river, most of the French infantry is now fighting along the north bank; Team Tuck arrives.

Turn 8: the GMC moves to engage the first H35, both vehicles fire – result the H35 burns, the GMC has another dent! An M3 lt. tank rushes down the road through a hail of ineffective `75 shells and engages the last H35, this too is knocked out!!!

At this point the French commander orders his forces to withdraw, covered by smoke from the `75s…..
Posted by Richard B at 13:10