Our hobby is as varied as we want to make it, fantasy or historical. For me I love the history and characters who add colour to it. My favourite nation - the French, there are loads of reasons behind this, I think the main one is the fact it is little written about in English and rarely if ever in those few texts on the subject given half the credit it deserve.
Musee des Troupes de Marine in located near the coastal town of frejus in southern France.
Situated just off junction 39 (Frejus) of the E8 motorway which runs along the , well sign-posted and easy to get to by car.

Troupes de Marine for those who don’t know, is the title given by the French to their colonial army; either foreign troops (tirailleur, spahis, etc) or French nationals serving over seas on a more of less permanent basis. The Troupes de Marine does not include the Foreign Legion within its ranks, though the units will often be seen serving with one-another.

The museum is housed in a large modern airy building set within the grounds of Camp Colonel Lecocq home of 21st Regiment Infantry d`Marine. The building is set in a area of rough grass/hedges among which are dotted several large pieces of C19th ordinance; an AMX13 light tank, a EBR 8 wheel armoured car and a howitzer which I couldn’t identify at the time, which was captured in Chad (since I’ve been home the guys over on The Guild forum have identified the gun as a Yugoslavian M56).

Entrance was free and the inside of the building is well lit and airy, almost all the exhibits are held in glass cabinets. The museum is split between the ground level and an open mezzanine which runs around the first floor; all information is in French only.

The ground floor starts with a information on the humanitarian side to the Troupes de Marine, and their medical work in Africa and the Far East from their earliest period up to today; they were also responsible for mapping, exploring much of the then unknown reaches of the world, which is all covered in this area. There are displays of medical, scientific and exploration equipment, plus mannequins with uniforms of various types from 1870 – 1930; the walls in all areas are covered with photos, paintings and posters further illustrating the period/topics.

At the end of the hall there is a lower section (like a crypt) with subdued lighting. Here you will find battle honours and flags from the various regiments, the French colonial army has served all over the world for four hundred years, many battle laurels will be familiar to members – Sebastopol, the Marne, the Somme, Sedan, Tobruk, Bir Hakeim, Cassino, etc. Here too were large notice-boards each bearing a number of photographs and citations for soldiers from Troupes de Marine killed in action since 1964 () through to 2008 in .

As you ascend from the memorial you are faced with two interesting pieces of ordnance – a 80mm mountain gun “de Bange” and an excellent example of a Hotchkiss 1pdr gatling gun; both in superb condition. The last section on the ground floor is dedicated to one of my personnel favourite units – Le Saharienne, the camel mounted auxiliaries. There was a diorama in 20mm with a full Saharienne unit on parade, uniforms and artifacts plus a number of photographs which I’d not seen before. The section followed the unit from its formation (see my article way back in J57) through WWII and up to motorized columns in during the 1960s/70s.

Upstairs we find two glass rooms and a mezzanine floor which runs around the entire building. The glass rooms contain medals and ribbons donated to the museum by ex-servicemen or their families, one also has a fine display of 1/35 scale dioramas of WWII vehicles and crews from the various formations and theatres.

The mezzanine should be walked around clockwise starting at the top of the stairs; it follows the history of the Troupes de Marine (sometimes re-named La Colonial and today often referred to as simply – l’Outre Mer) during it 400 years of service. Obviously large areas are outside the remit of the society, but one section on Marshall Gallieni is of special note as his ideas on colonization and on winning the “Hearts and Minds” of the natives are the foundations upon which all occupation armies since have build their strategies.

My favoured colonial period 1900-35 is of course covered, but only in passing, but there were some nice uniform and weapon/kit displays, plus the posters, photographs and other illustrations around the walls.

The largest sections are of course WWI and WWII.
The Great War section is a good display of uniforms and kit with some interesting items, including – a Chauchat, and a Spanish Ruby pistol (issued to French officers).
WW2 covers all periods from 1940 through to Liberation (though the period and the fighting in Syria/Lebanon and the resistance to the Operation Torch in are passed over). This is a large display area with lots of cases covering the different campaigns and theatres; the ones on General Leclerc and Bir Hakeim were particularly good.

There are then sections on , and each with some great photos and uniformed mannequins. The last section taking us back to the stairs is modern peacekeeping/police actions from 1960 to date – the , , , , , , the First Gulf War and . Not all covered in any depth, but all illustrated with photos or prints.

I found the visit worthwhile and even with my schoolboy French, the information was easy to read and follow.
Musee des Troupes de Marine, Route de Bagnols-en-Foret, 83600, Frejus. Tel. 04 94 40 81 75 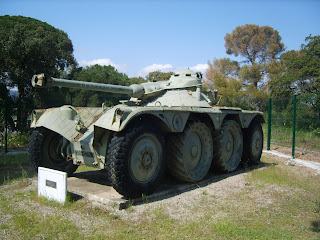 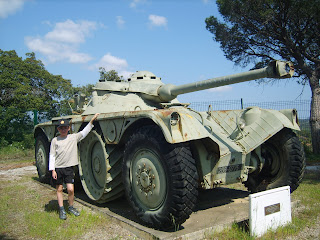 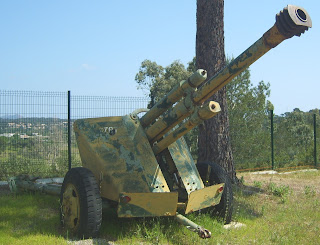 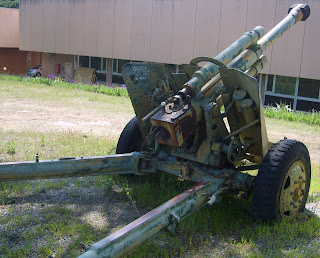 The Yugoslavian M56 as mentioned in the text 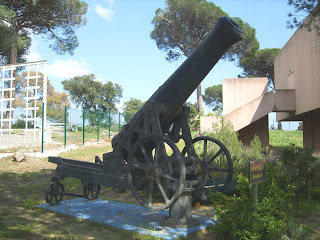 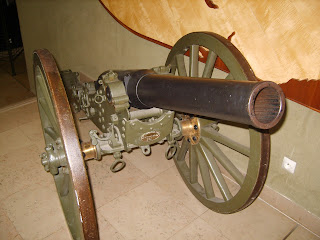 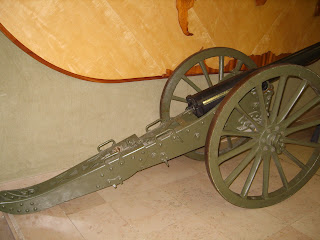 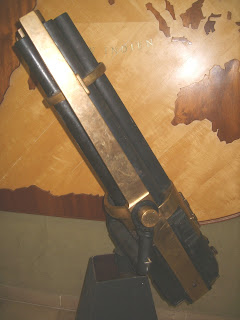 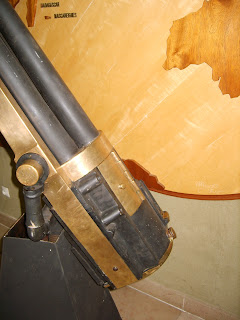 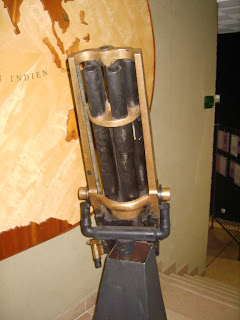 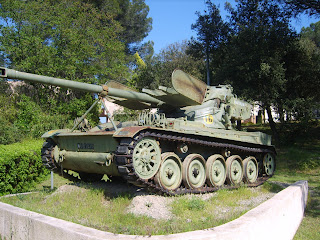 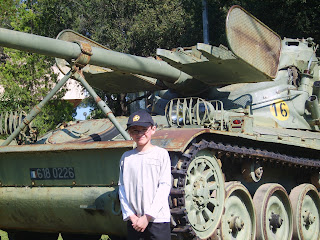 The town itself is very interesting too, it has been the base for the French Colonial Army for years. There are also Roman ruins (a terrific ampitheatre), it was also the port from where Octavian set sail to Egypt to do battle with Mark Anthony at the naval Battle of Actium. The town is also command centre for the Marine airwing and has the national memorial to the Indo-China War (very moving). 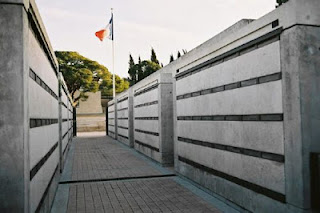 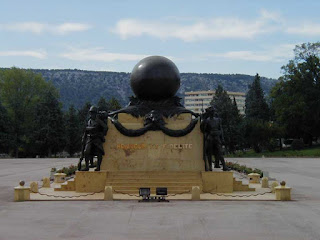 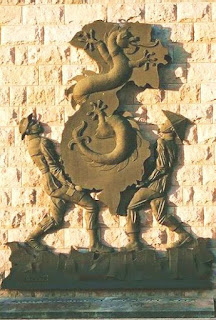 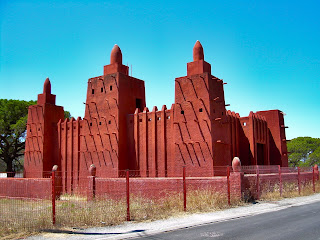 Missiri Mosque, built in 1930 by Sengalese soldier stationed in Frejus. A miniature replica of the Great Mosque of Djenne (Mali, Africa). A bit run-down and sad today, but interesting. 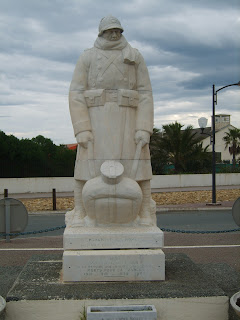 War memorial on the seafront dedicated to those soldiers from North Africa who died for France during the both wars. 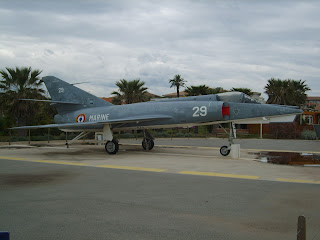 Dassault-Breguet Super Étendard jet on display on the seafront
Posted by Richard B at 04:05

Email ThisBlogThis!Share to TwitterShare to FacebookShare to Pinterest
Labels: About me, general wargames, military history