Now many of you know I`m no great fan of “elites” on the wargames table and have never been an SS or “big cat” fan-boy, but whilst I was reading Ewald Klapdor’s interesting “Viking Panzers” which I was sent to review for Battlegames magazine I was struck by the number of highly playable small unit actions depicted in the text. This particular battle with a mostly infantry force defending against Soviet attacks seems like a challenging table-top battle.

History
The Soviet offensive in the east was increasing in tempo all across the entire front, in places spearheads or advanced patrols managed to find weak-points or gaps in the fluid German defensive line. One such break-though occurred east out of Mieczyslawow and threatened the rear-left flank of 5th SS Panzer Division “Wiking” by cutting both the Wyskow-Warsaw road and the rail-line which ran about one kilometer east of the .

Zabrodzie at the time was occupied by the train elements of 5th SS, gathered under the command of 1st Tank Battalion’s headquarters company; the officer in charge was SS-Obersturmfuhrer Senghas. Senghas immediately organized all combat elements from the trains and HQ company and set about setting up defensive positions along the rail-line and then fought a protracted defensive action over the next two days against Soviet infantry supported by tanks, artillery, mortars and anti-tank guns (firing directly). This action allowed panzergrenadier regiment “” to pull back and link up with 3rd and 4th companies of the tank regiment and re-establish the lines. For his quick thinking and well-thought-out actions at Zabrodzie, SS-Obersturmfuhrer Senghas was awarded the Knight’s Cross on 11th December 1944.

From the we must assume that all of the battalion recce elements were not present at the time (presumably committed elsewhere). Now assuming Senghas had to leave enough men and specialists to guard or in the worse-case scenario drive away to safety those valuable vehicles and supplies, I would give him maybe 200 men to deploy as infantry. In addition he had two damaged Panzer IVs which were being repaired (the main armament seems to have been OK) plus a couple of SP 20mm flak. He also gathered together scattered elements of an engineer battalion and a penal company and combined them into a 58 man company armed with SMGs, rifles and pistols. From Senghas` report we know his men had few LMGs and had to take the guns off the damaged tanks as extra weapons for his infantry.

Now for an interesting twist or just esthetics you could have the village on the table-top and field all those interesting supply, repair and communication vehicles. These could be used as objectives for the Russians to destroy (or the Germans to save).

Now according to Senghas the Soviets attacked in company sized groups of 50 or so men. Each attack supported by mortar and artillery fire, including direct AT fire.
Action timeline

August 18th 1500
The first attack with a couple of infantry companies, directed straight at the German positions with little thought to cover or tactics, supported by mortar and direct AT fire.

1630
The second attack, identical to the first

August 19th 1030
After a quiet night the next morning the Russians attacked again covered by heavy support fire directed at left side of the line. They attack from both patches of woods (in company strength), this time supported by four tanks coming from the right (2 Sherman and 2 T-34/76).

1230
Russians attack again from both sets of woods (2 coys each), they bring forward a 76mm AT gun to the edge of the right hand woods to try and knock out the Panzers and support their infantry.

1600
Senghas was informed that the Russians had broken through in the sector north of Zabrodzie on his right! From this time his men receive constant harassing fire from the rear right flank.

1800
Senghas organizes his men and pulls out. By forcing a march via a circuitous route around enemy held villages (in his rear), he managed to get the entire train and units to safety and back into German lines.

I`d like to thank Alan McCoubry and Ashley Ralston for their help with Panzer HQ TO&Es. 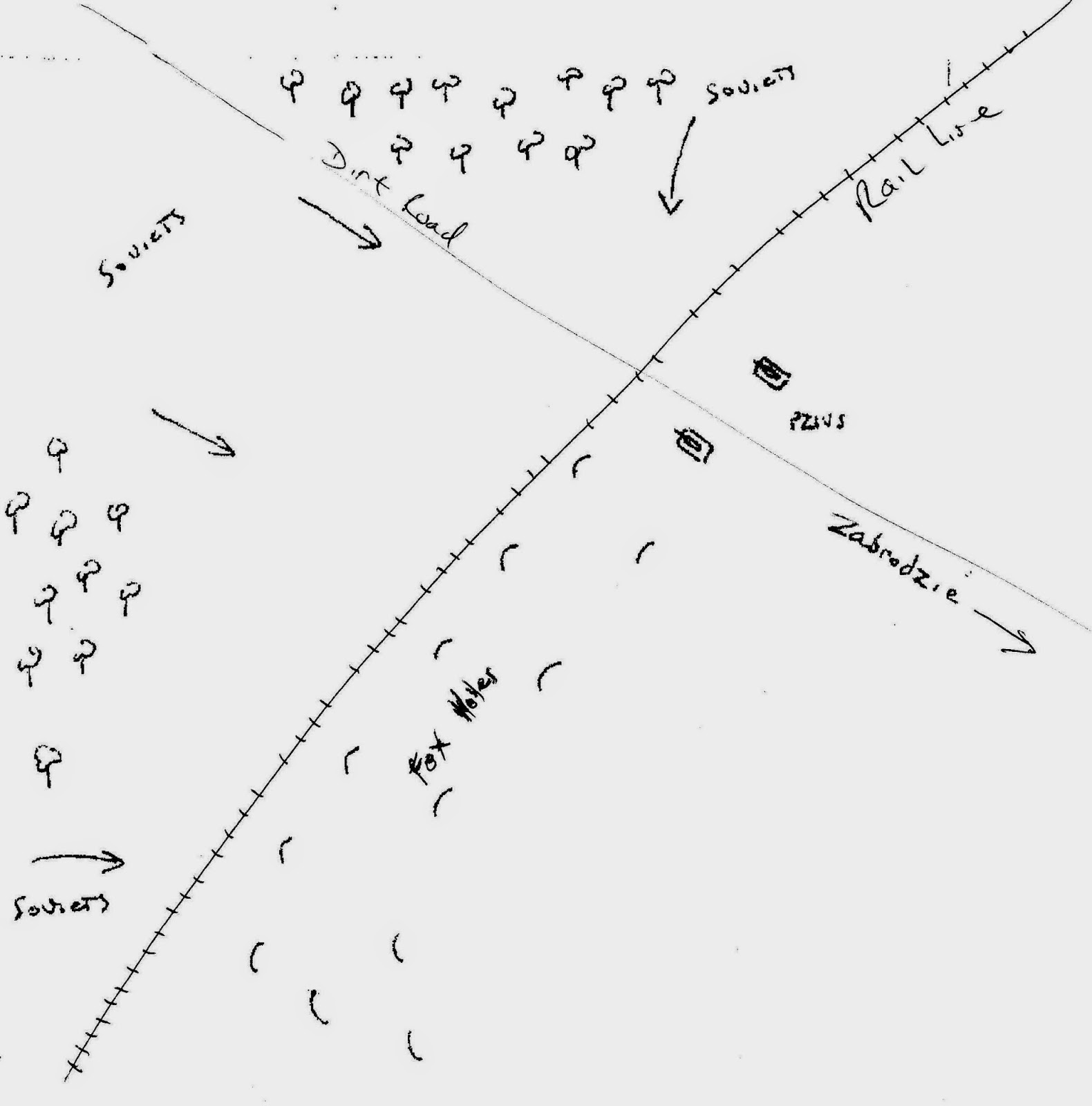