As part of the overall strategy of Eilbotel, whilst the 756th Mountain Regiment supported by elements of 10th Panzer Division forced the passes south of Pont-du-Fahs, elements of the Italian Superga division plus supporting armour are to drive up the Karachoum Pass and seize mouth of the pass where it opens into the Ousseltia Valley (this known locally as the Karachoum Gap).

The Italian command have been assured that French resistance with be negligible to nothing as the German attacks further west will draw off any reserves and German close air-support (Stukas) would be available.

Table looking to the south and the French positions: 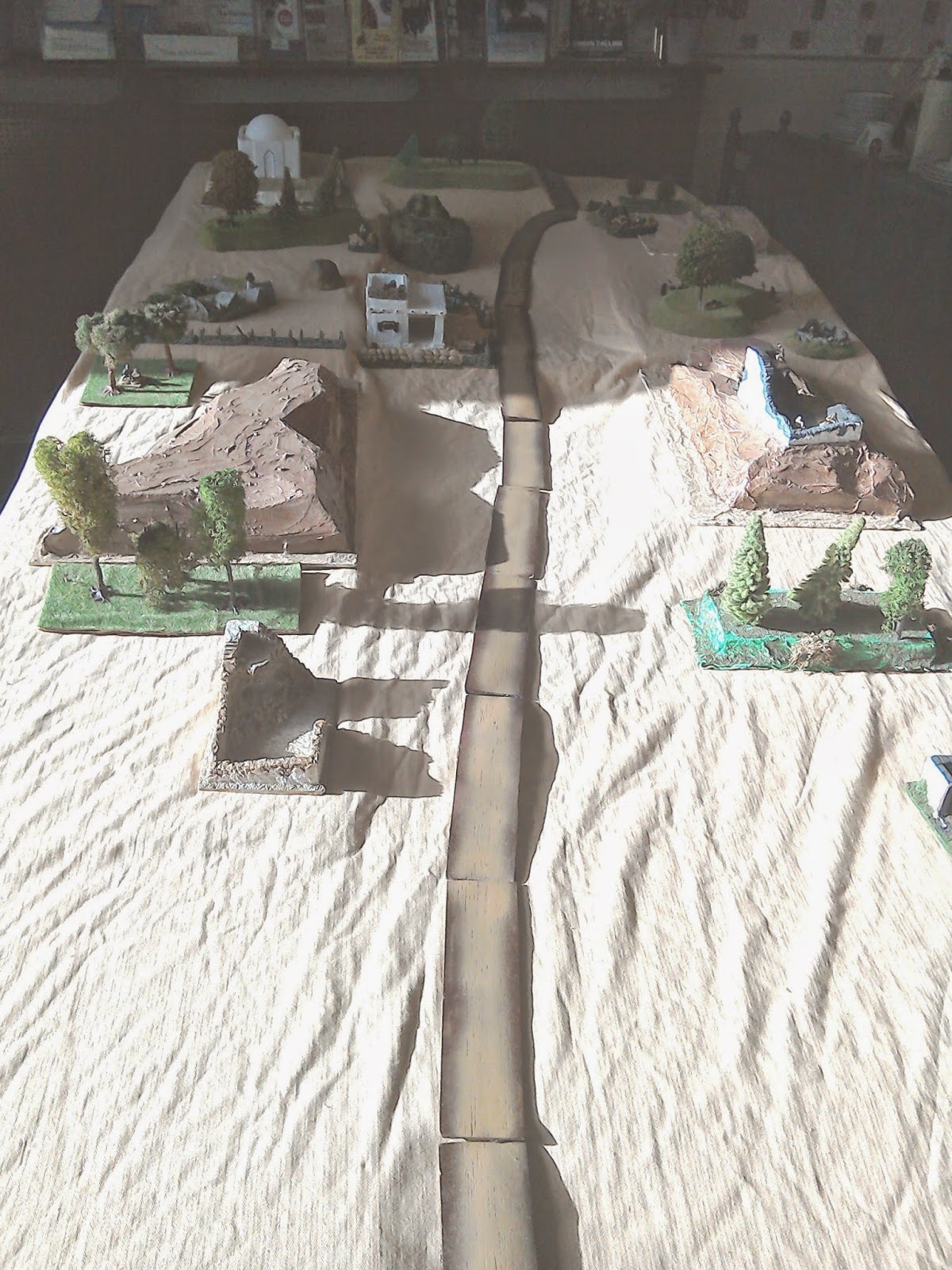 French positions looking from the north-west

Looking towards the shrine at the head of the pass 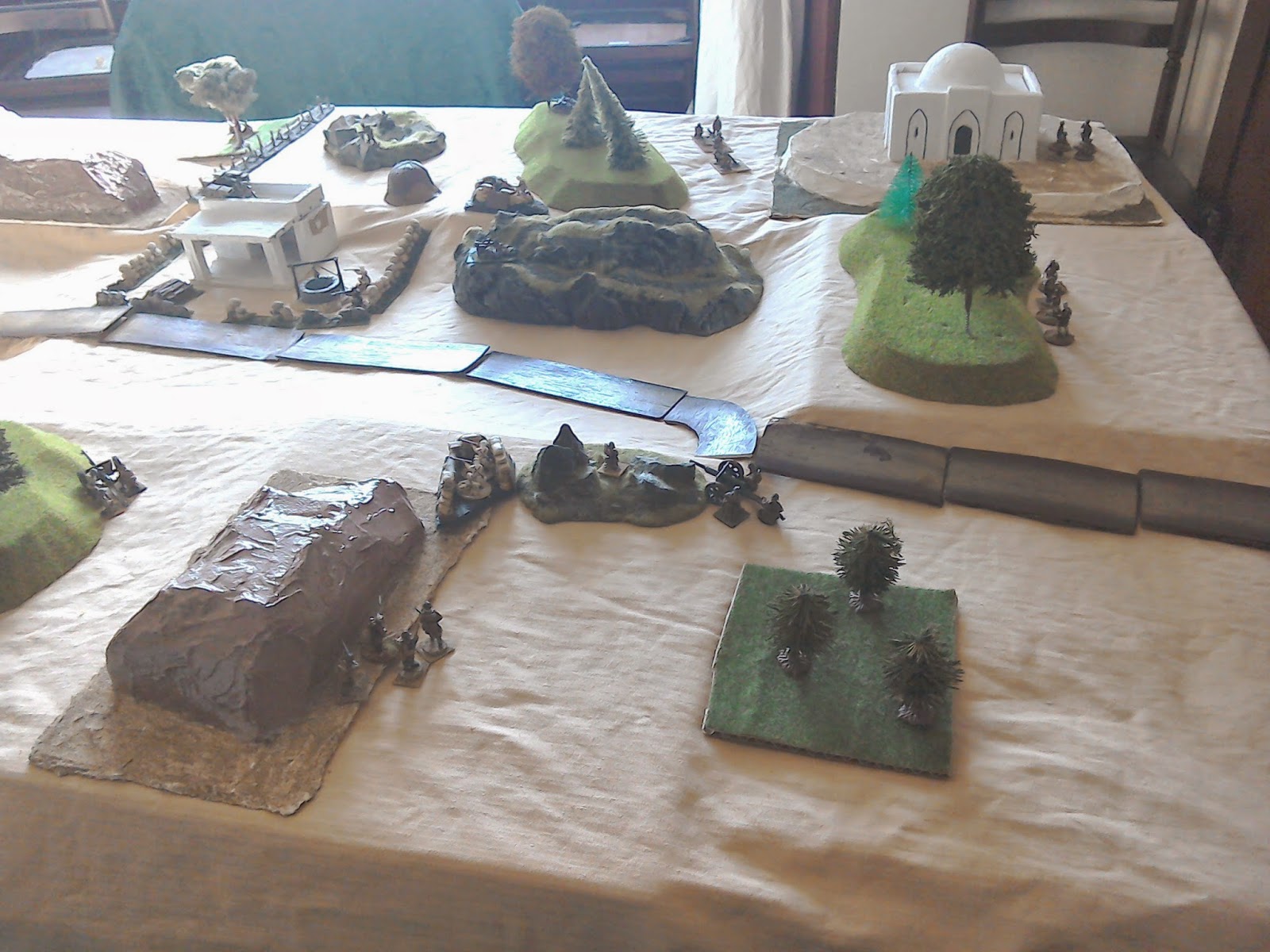 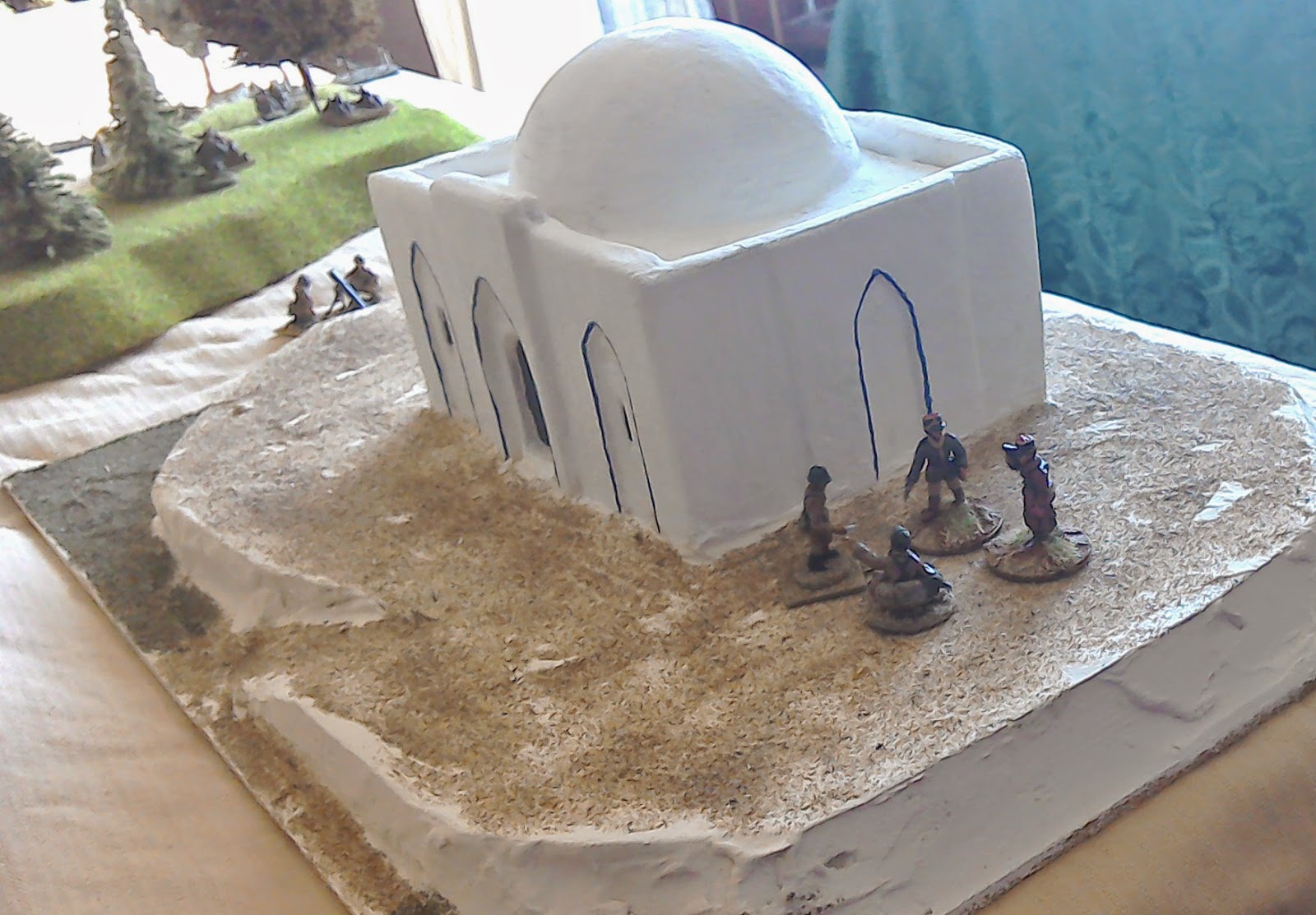 Facing the Italians are elements of Groupement Lagarde

Special rules
French ammunition shortages – each turn after turn 5 the French must roll each time they wish to fire their `75s, if they get a “1” the gun is out of HE shells (though they will have limited AP stocks).
After turn 8, the same roll must be made for their mortars too.

Italian deployment
To simulate the disorganised nature of the Italian command, their forces will arrive in a piece-meal random fashion (indicated by dice).
Italian recce company 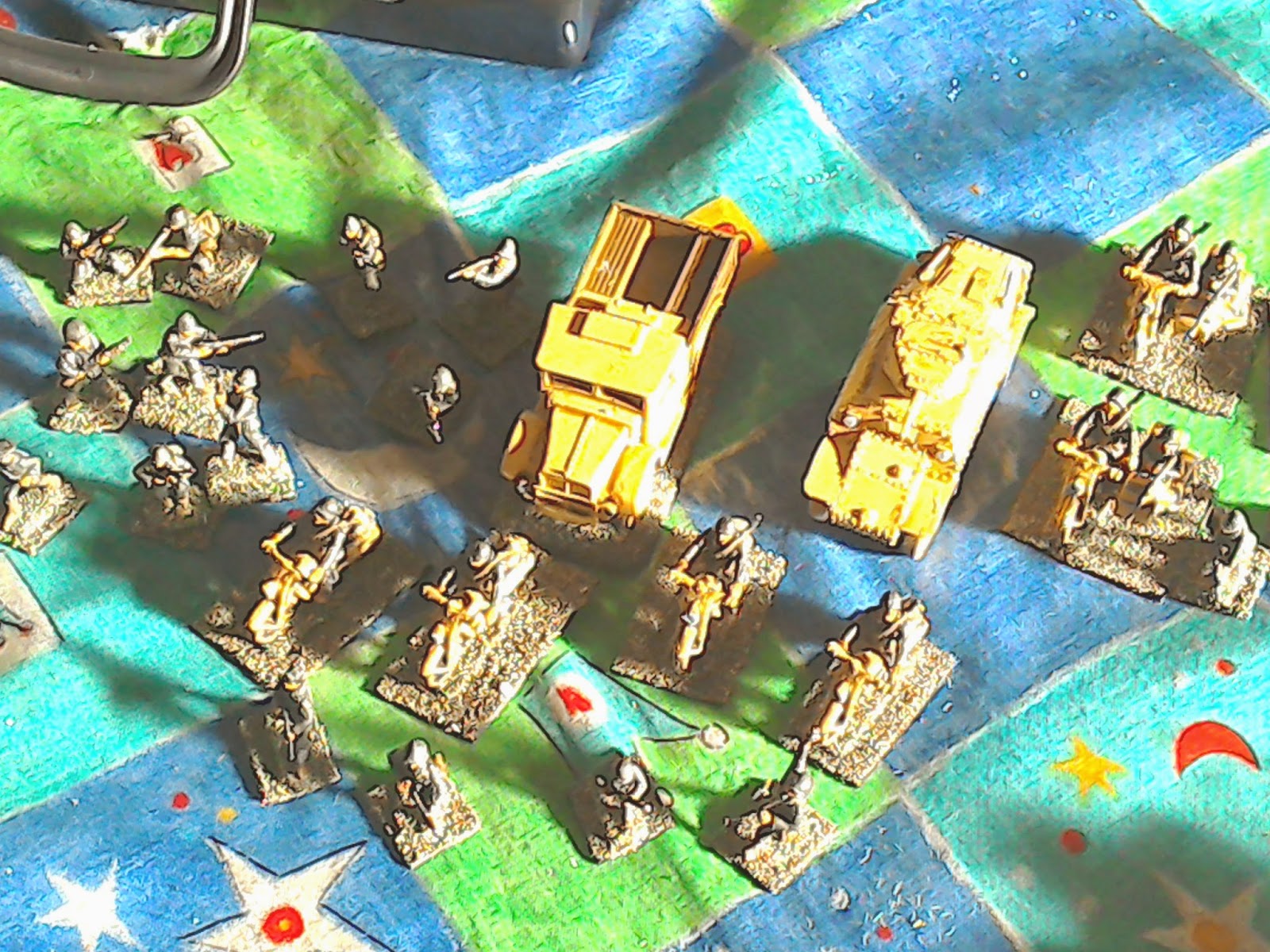 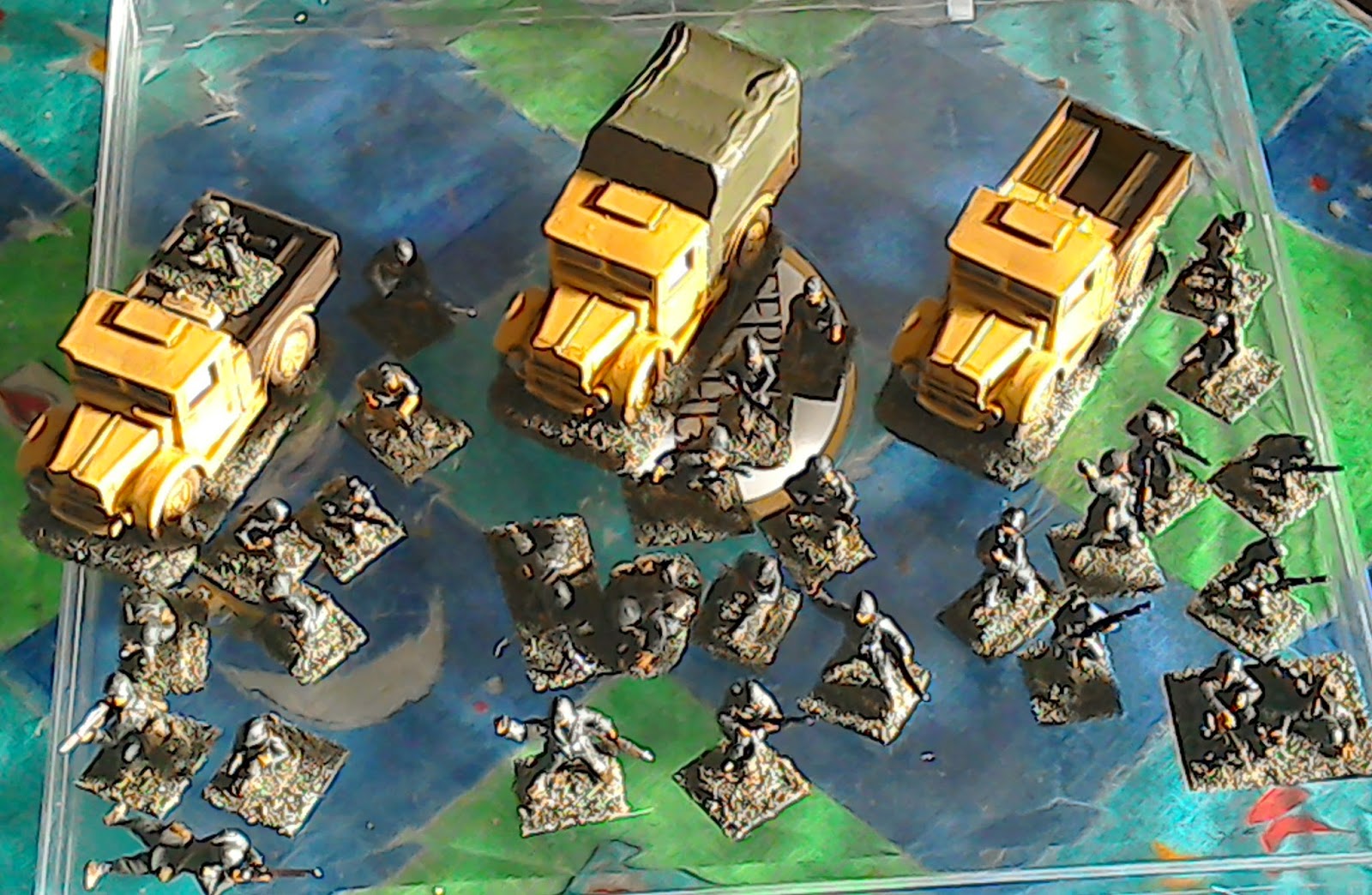 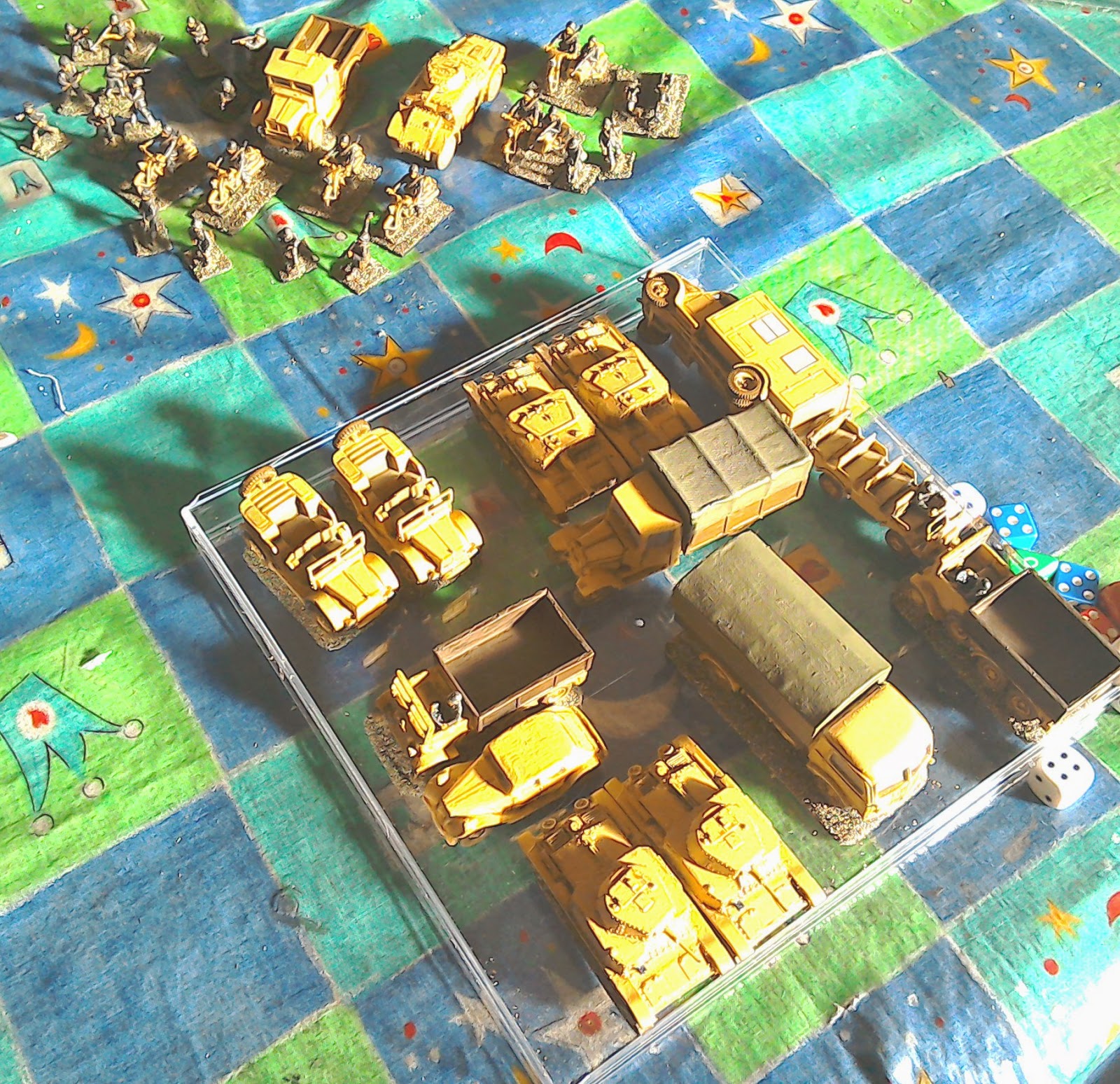 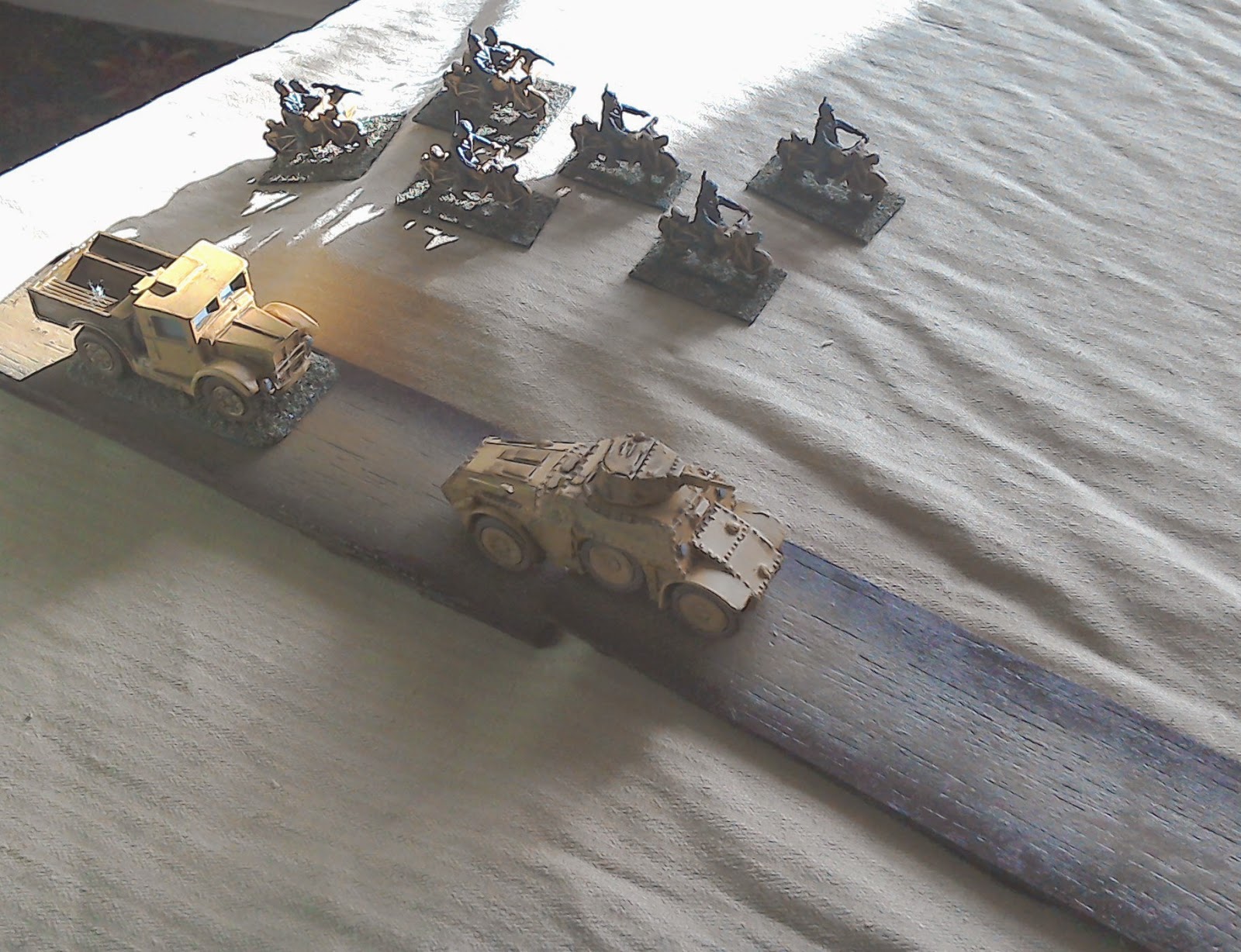 The game started with the Italian recce splitting left and right, coming under `75 and 80mm mortar fire. By turn 3 they were joined by a 75mm depot gun, but both recce platoons had taken casualties, the motorcycle one on their left, failing its morale on turn 5 and withdrawing to cover.
French mortars 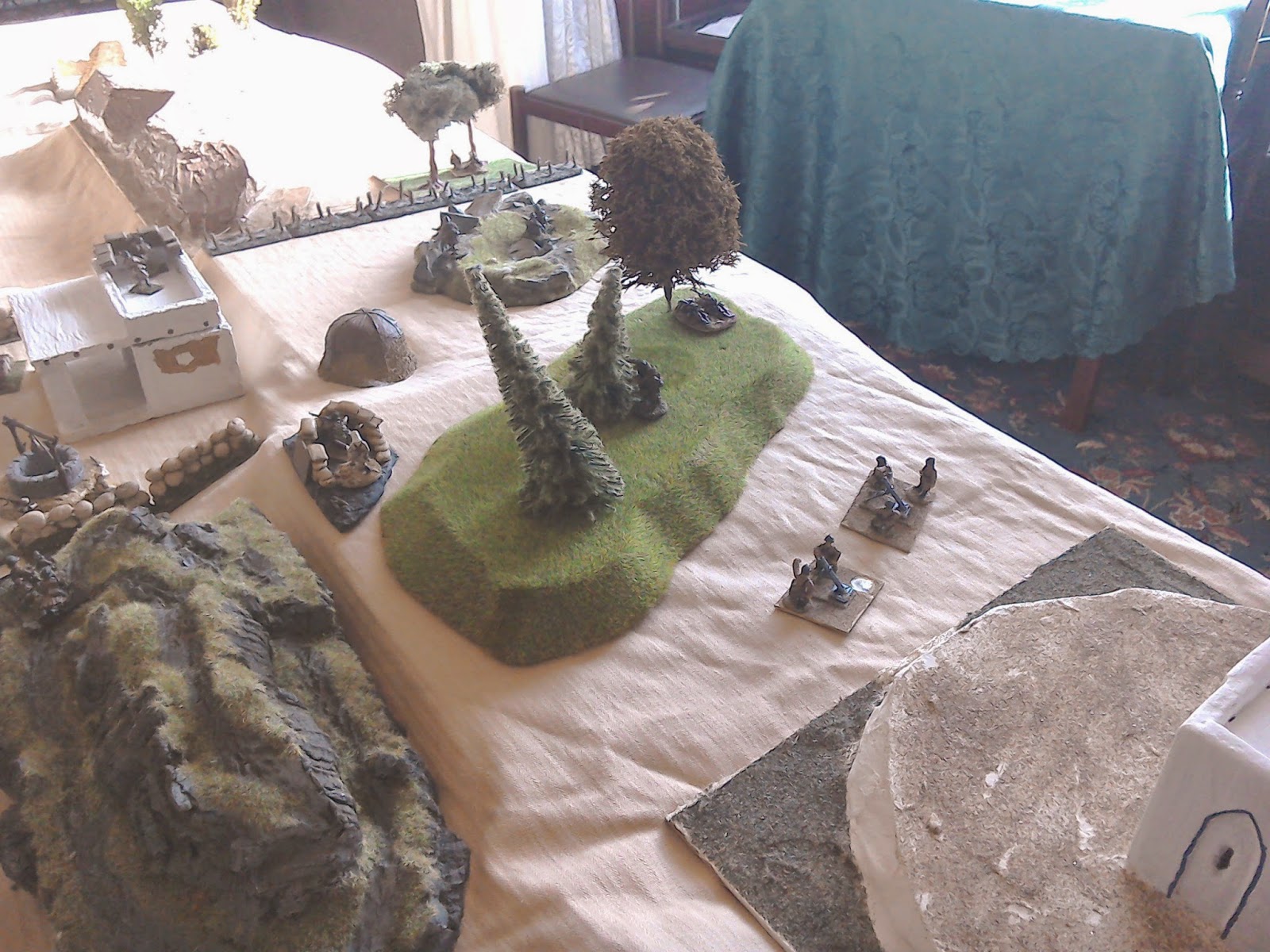 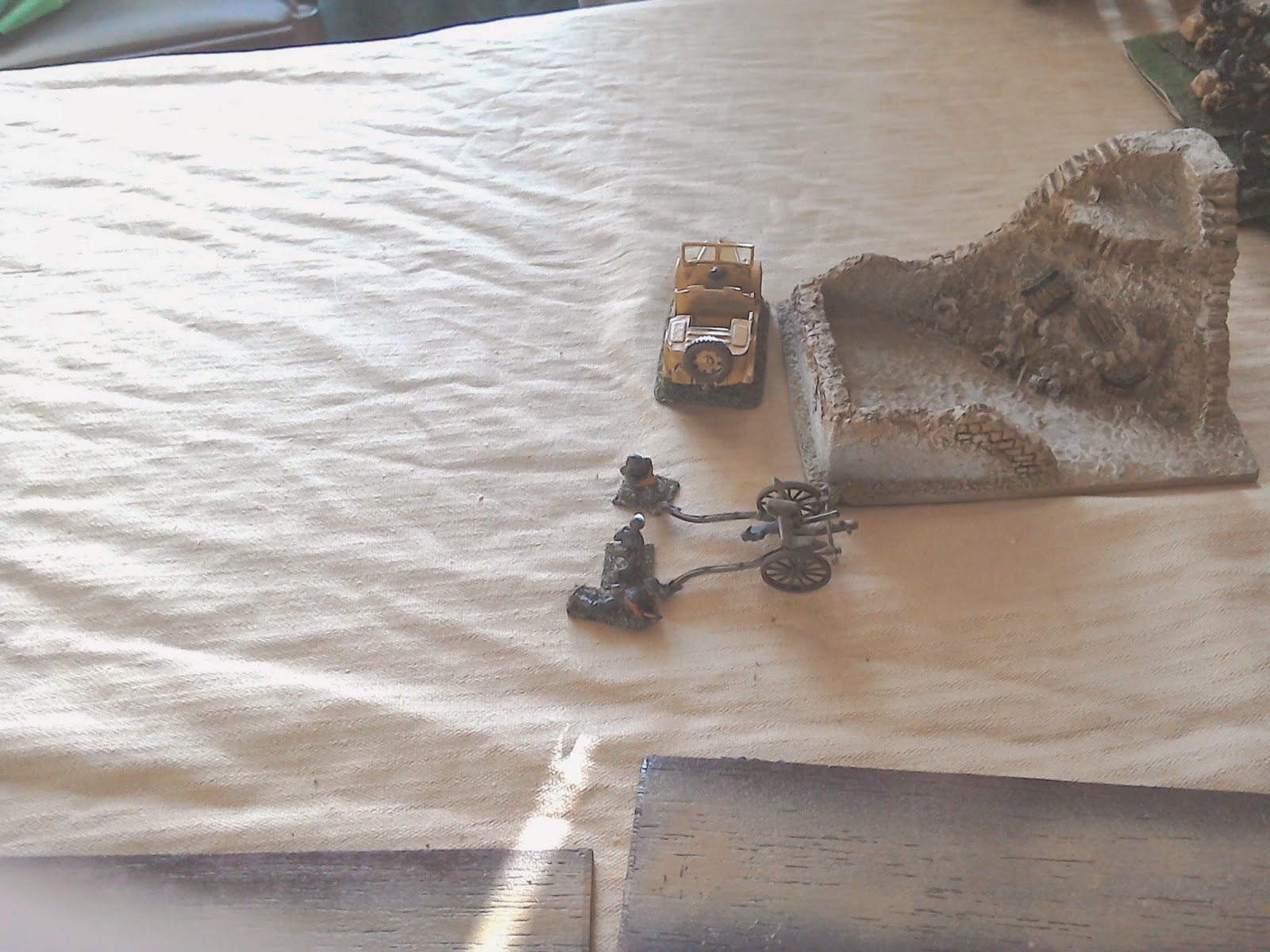 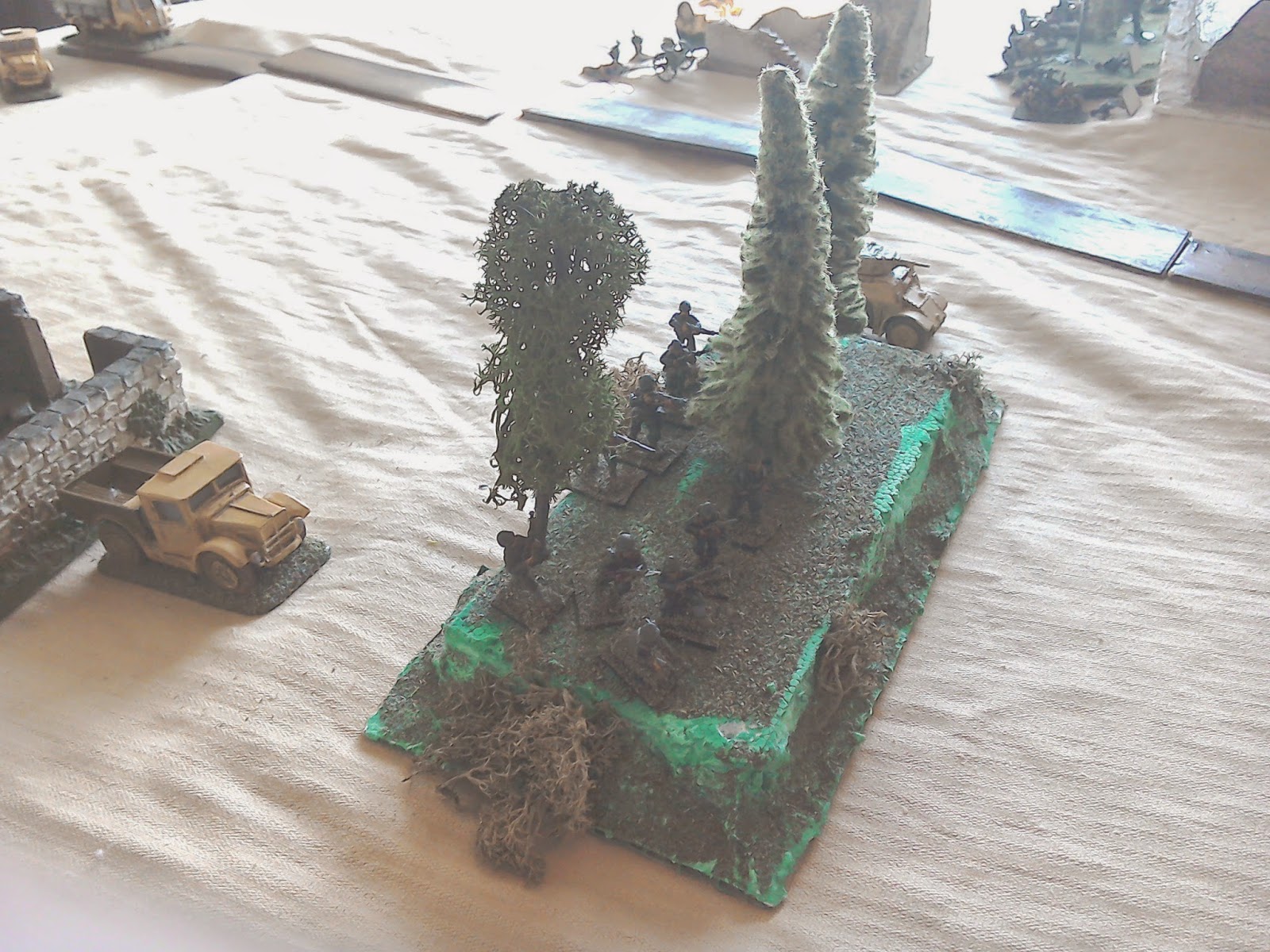 On turn 6 the recce were relieved to see a motorised rifle company coming up the road along with a Fiat 626 carrying a couple of Breda MMGs and an 80mm mortar. These again split left/right, but unfortunately the infantry platoon drove past the depot gun as it was obliterated by some accurate `75 fire, which also smashed the platoon in their truck……Ouch!!! 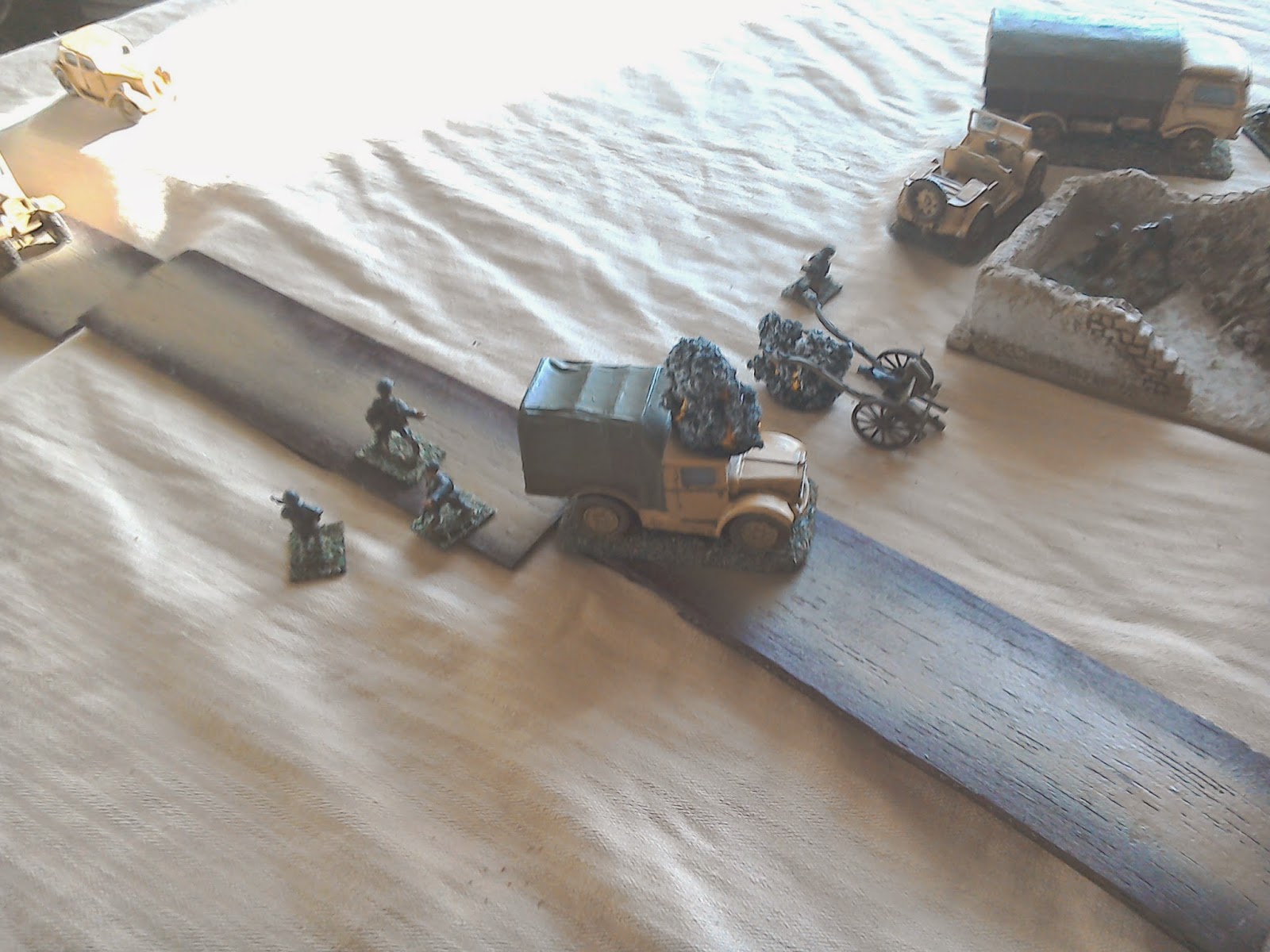 The Italian build up continued, with their infantry supported by mortar and artillery began to move (slowly) up the valley.
Italian infantry move to back-up the recce troops 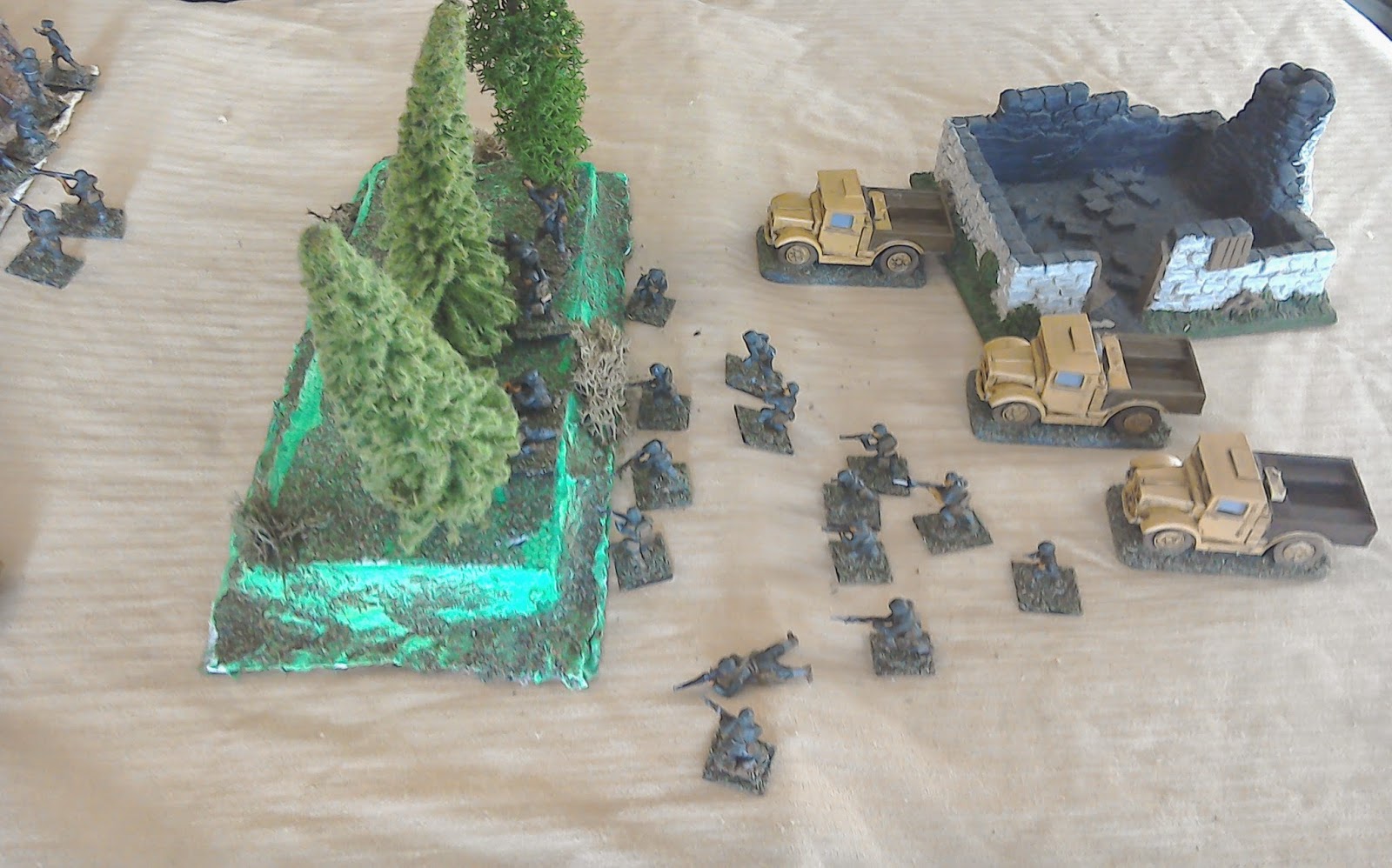 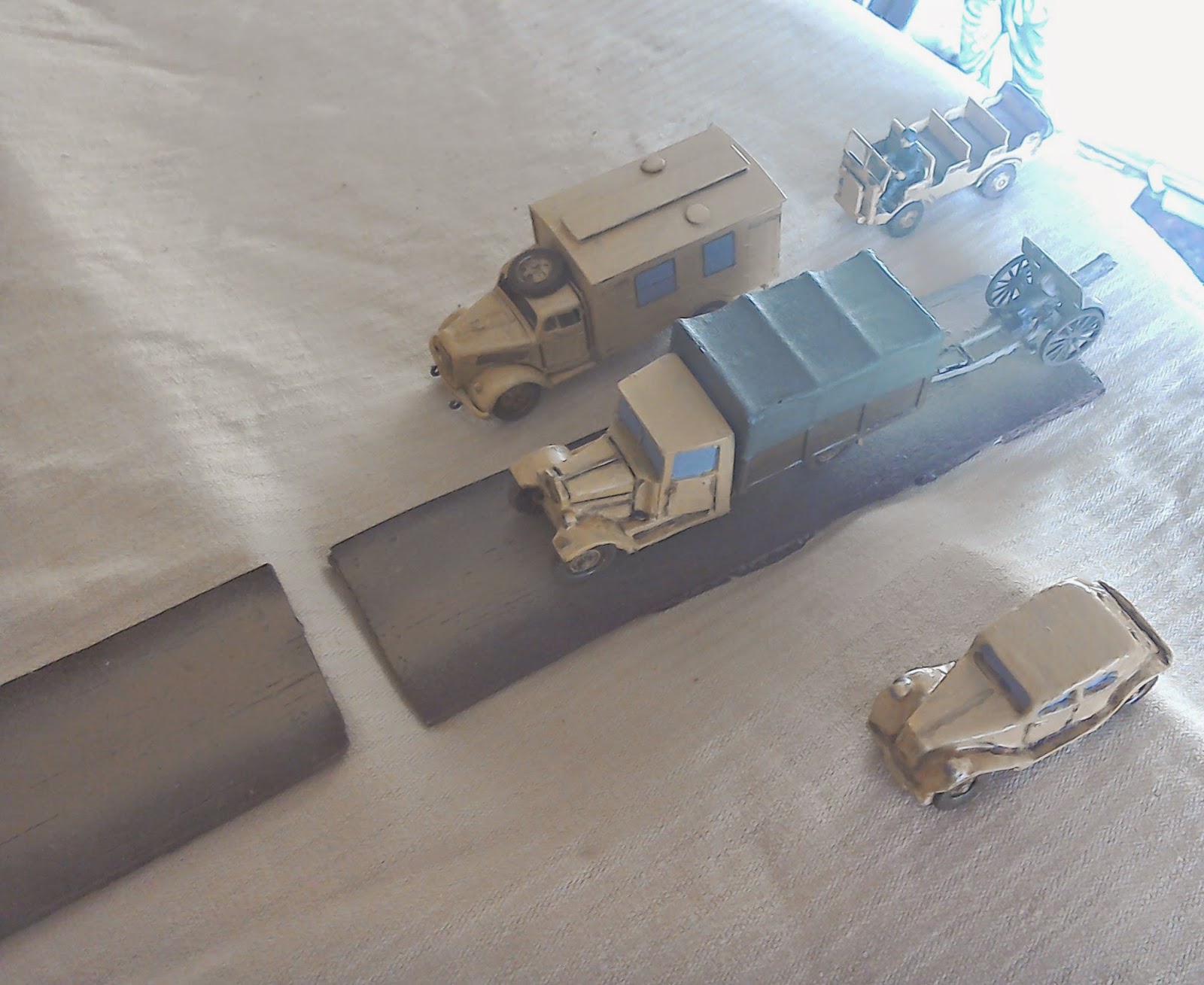 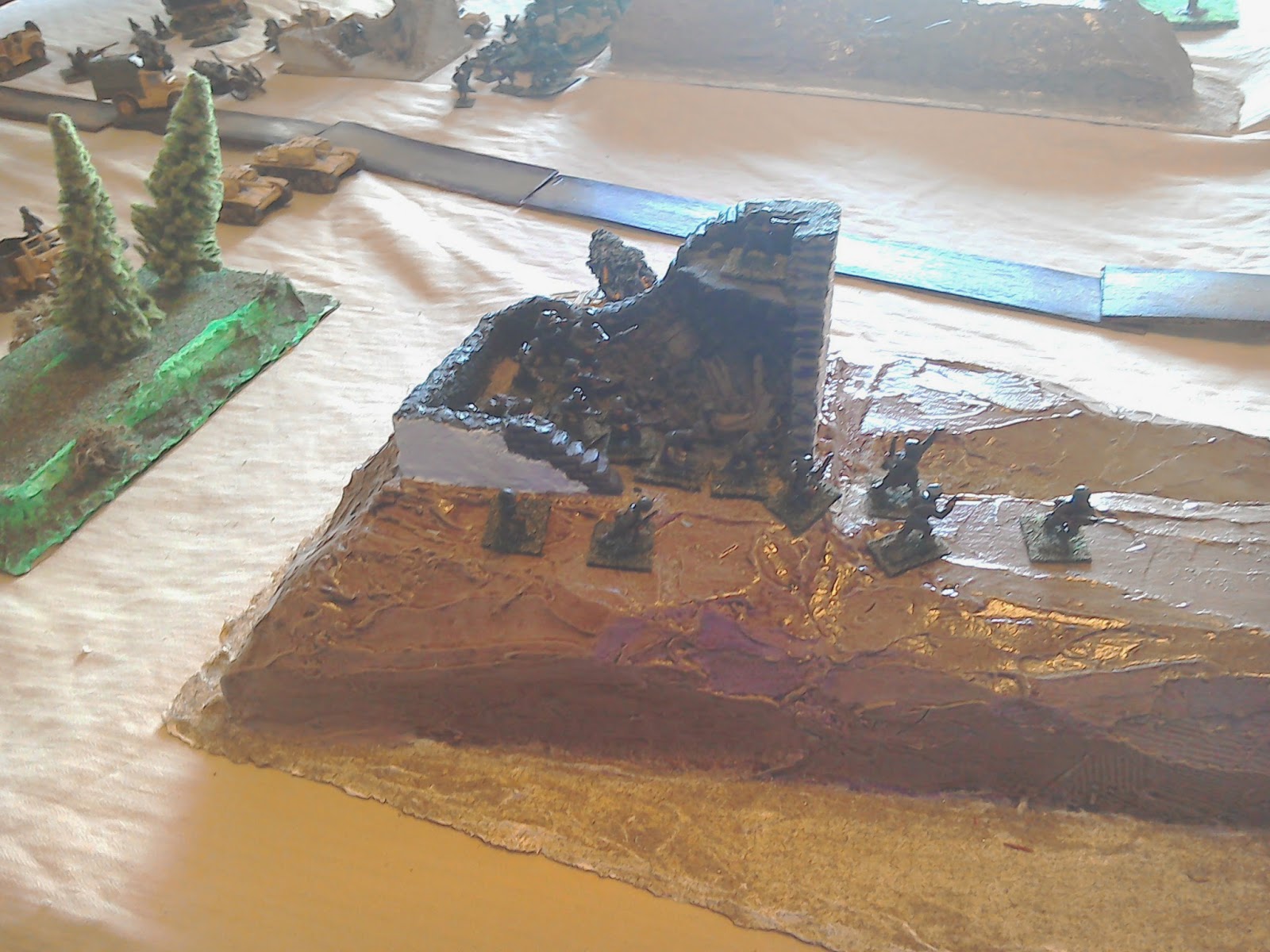 On turn 9 two groups of Goumiers suddenly appeared on the Italian flanks and caused some discomfort, the Italians rallied splendidly and annihilated them in a couple of turns with little lose of momentum to their main attack……
French Goumiers surprise the Italians 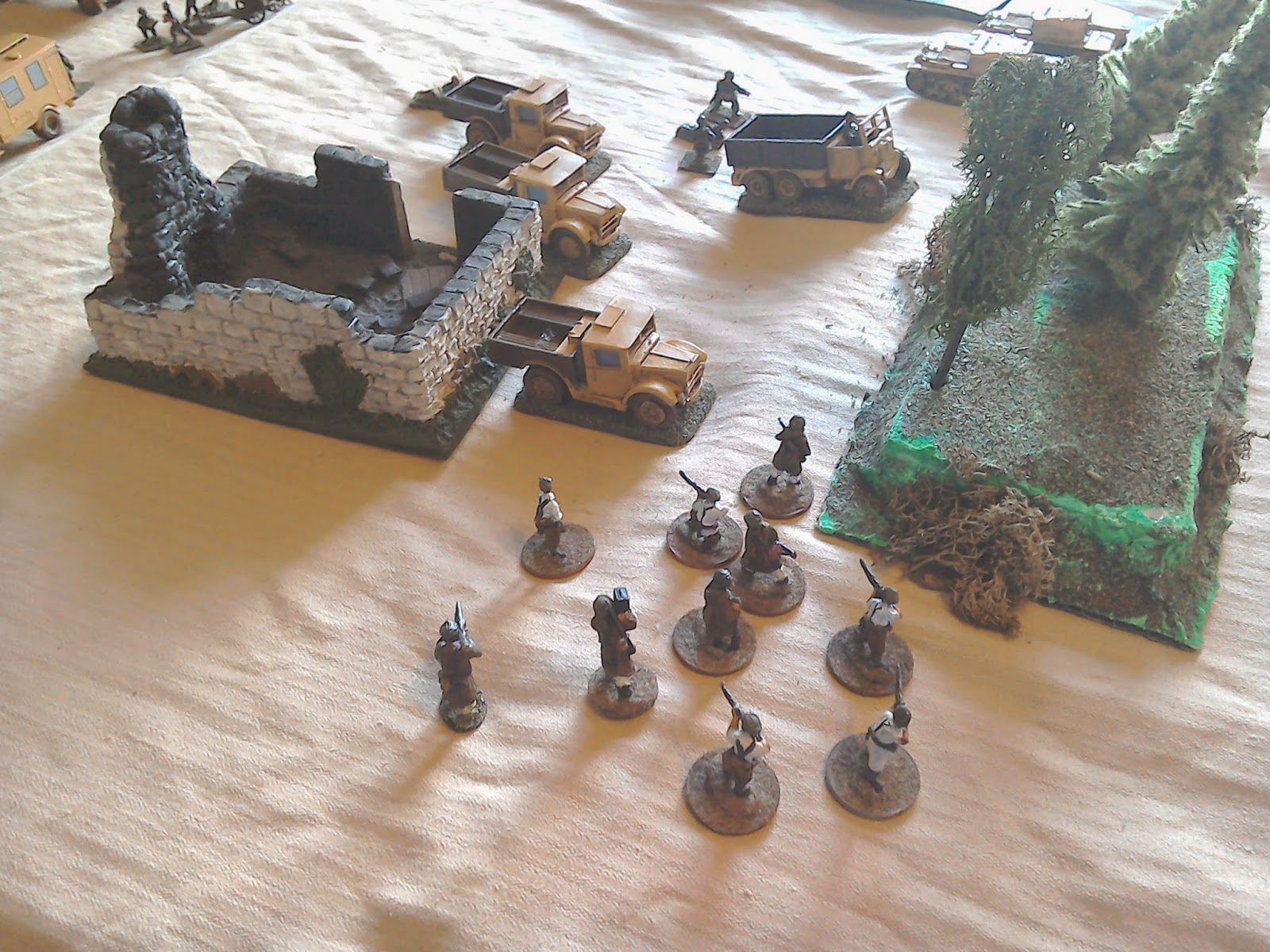 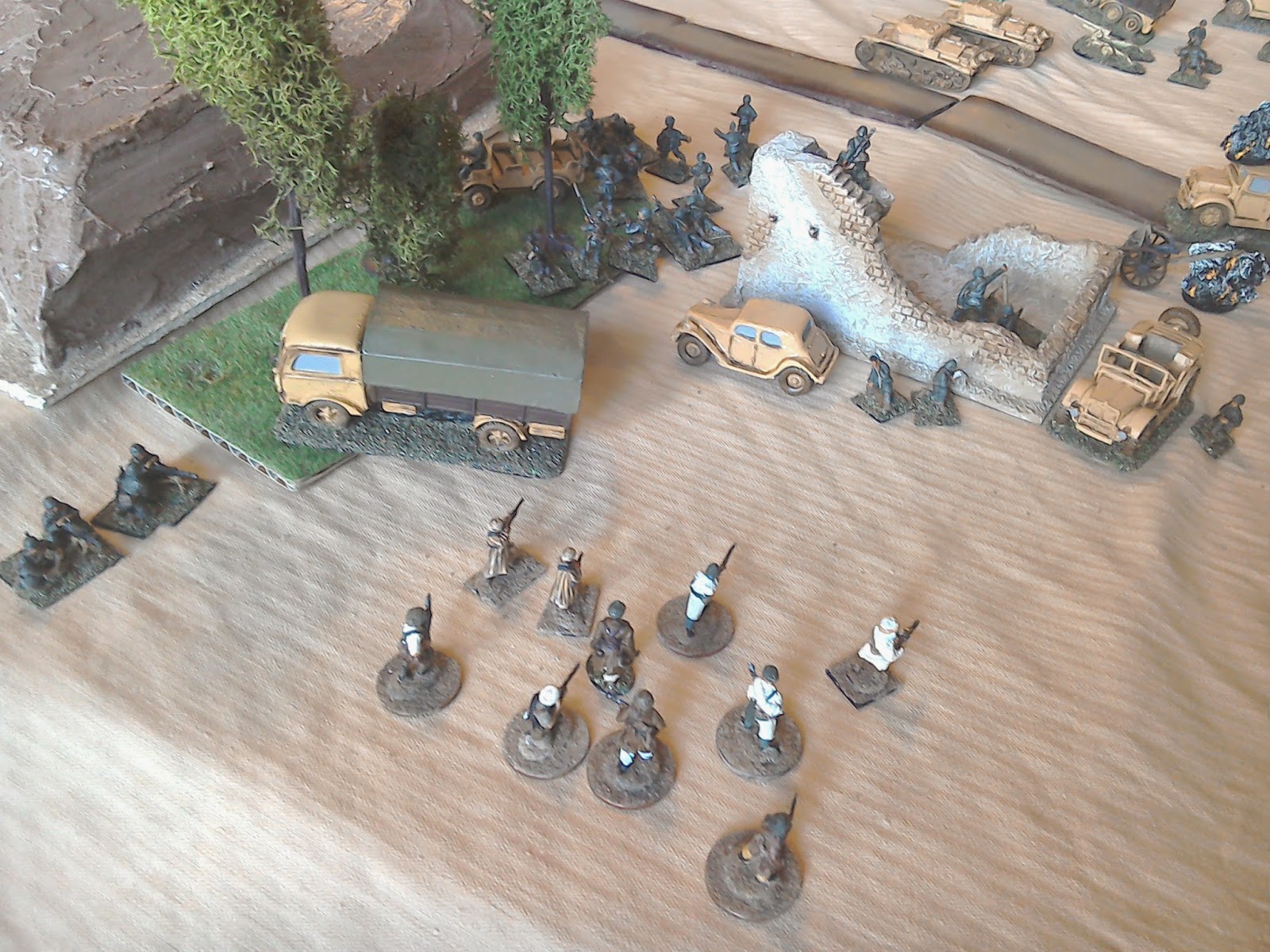 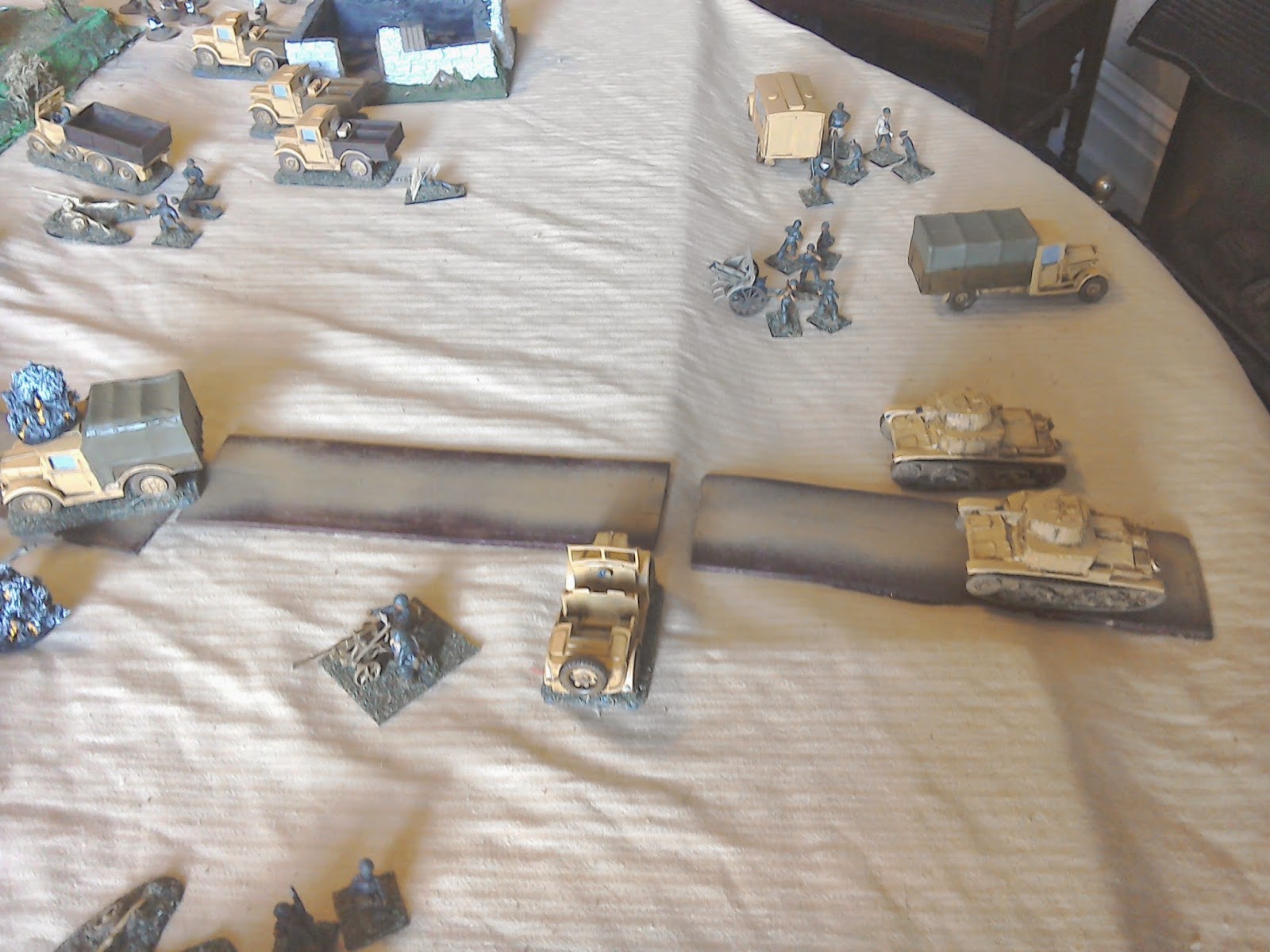 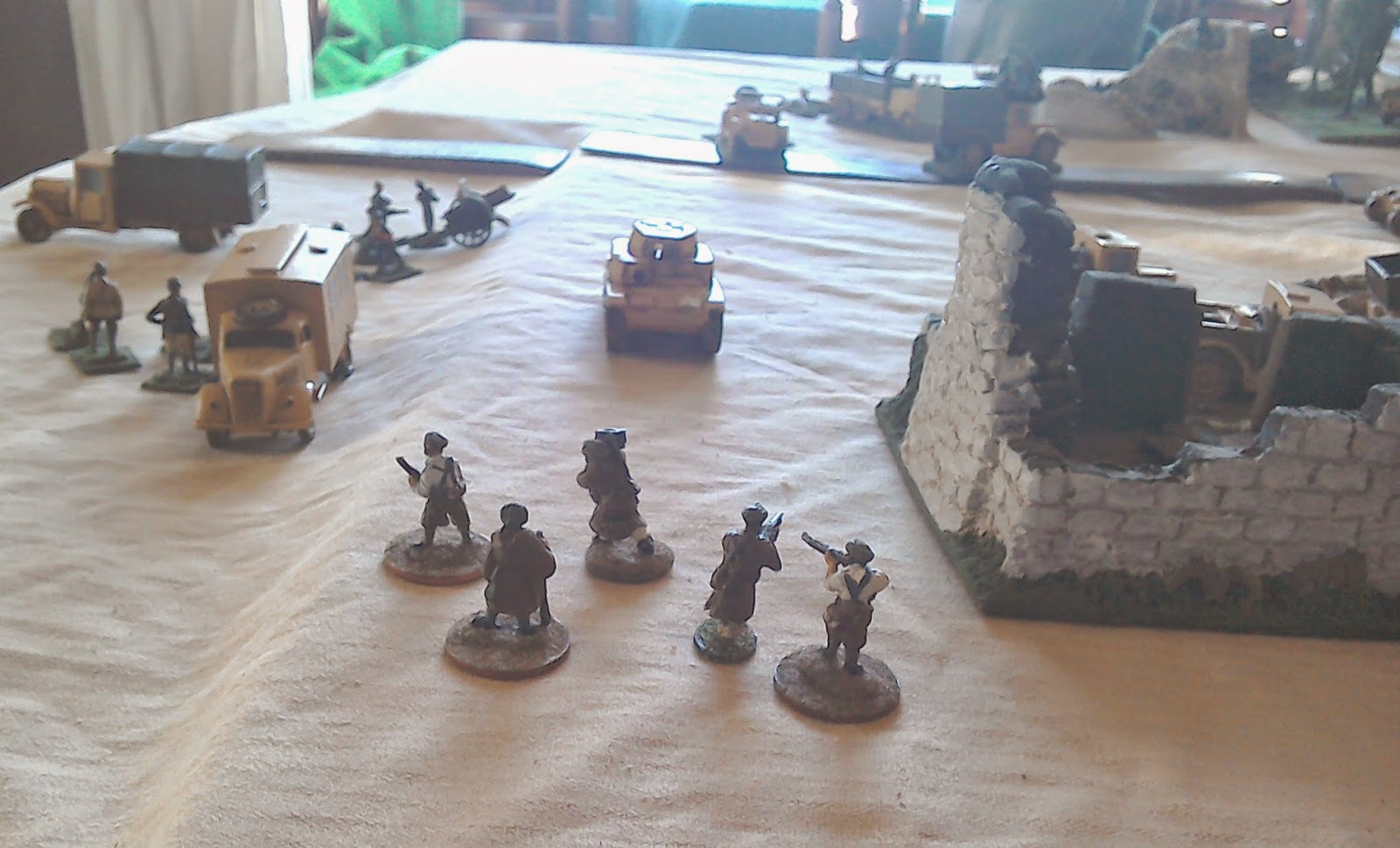 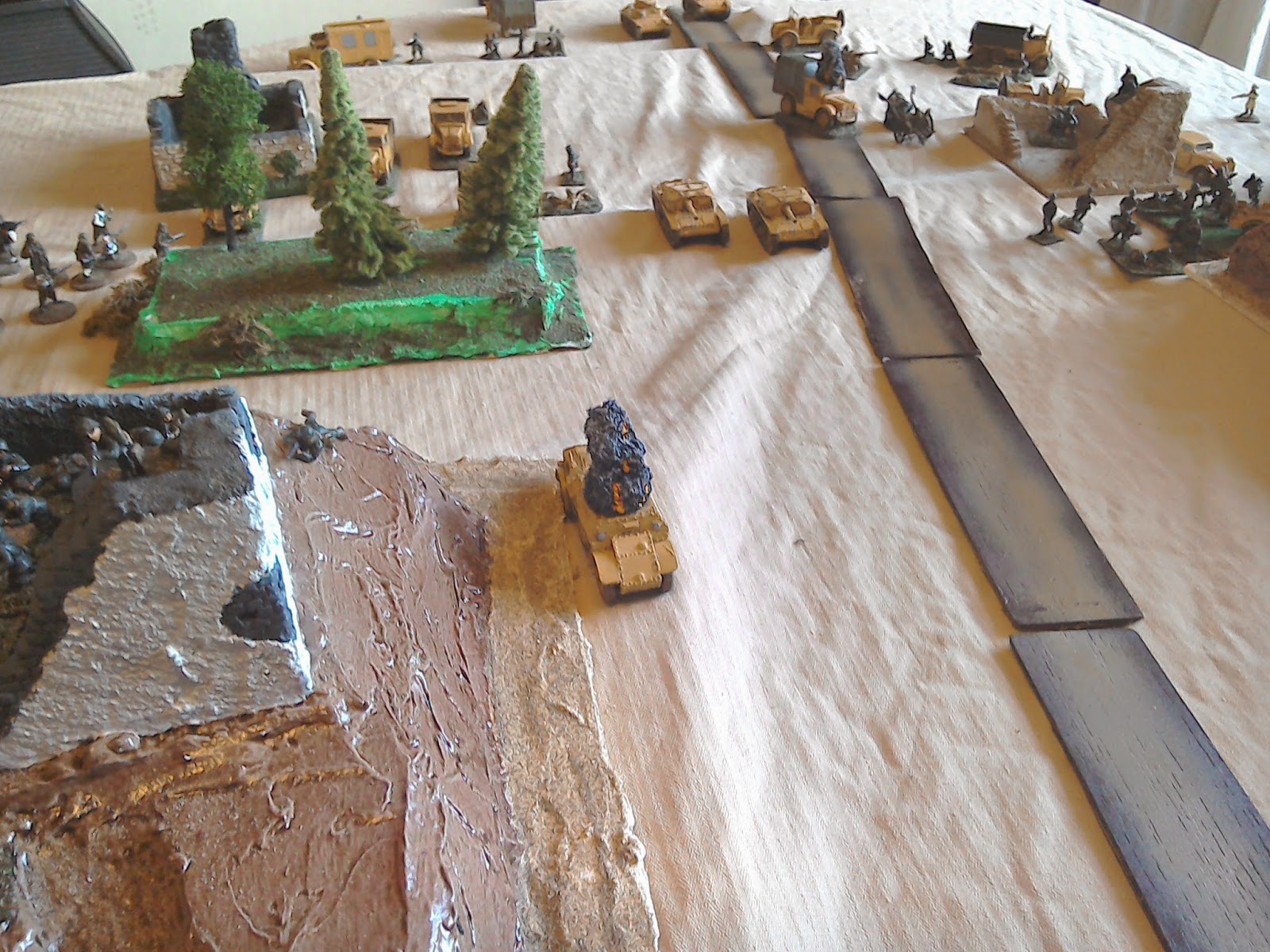 By now however the Italian 100mm and the two Semovente were wasting any French positions who showed themselves and the two `75s were soon knocked out….. 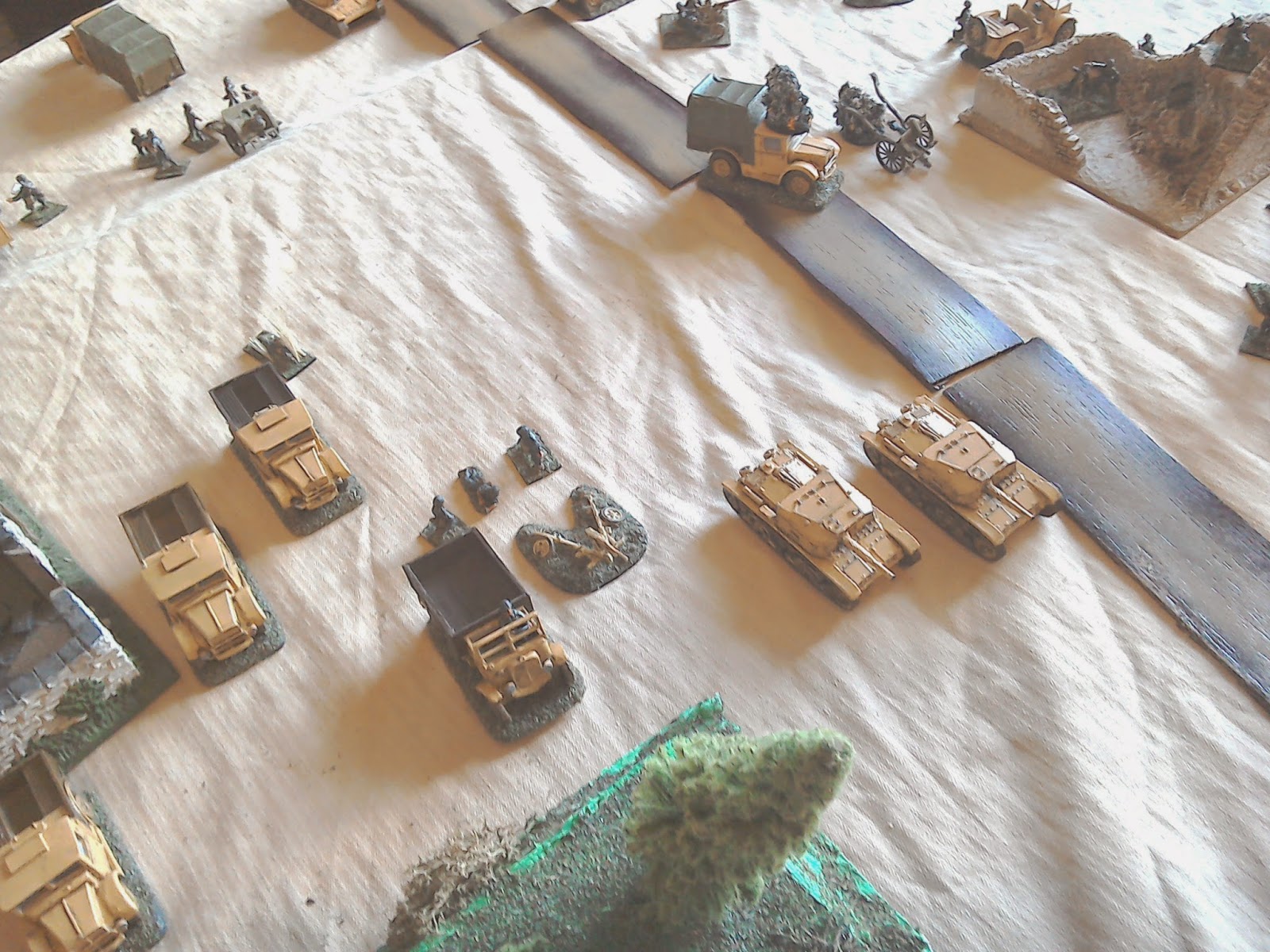 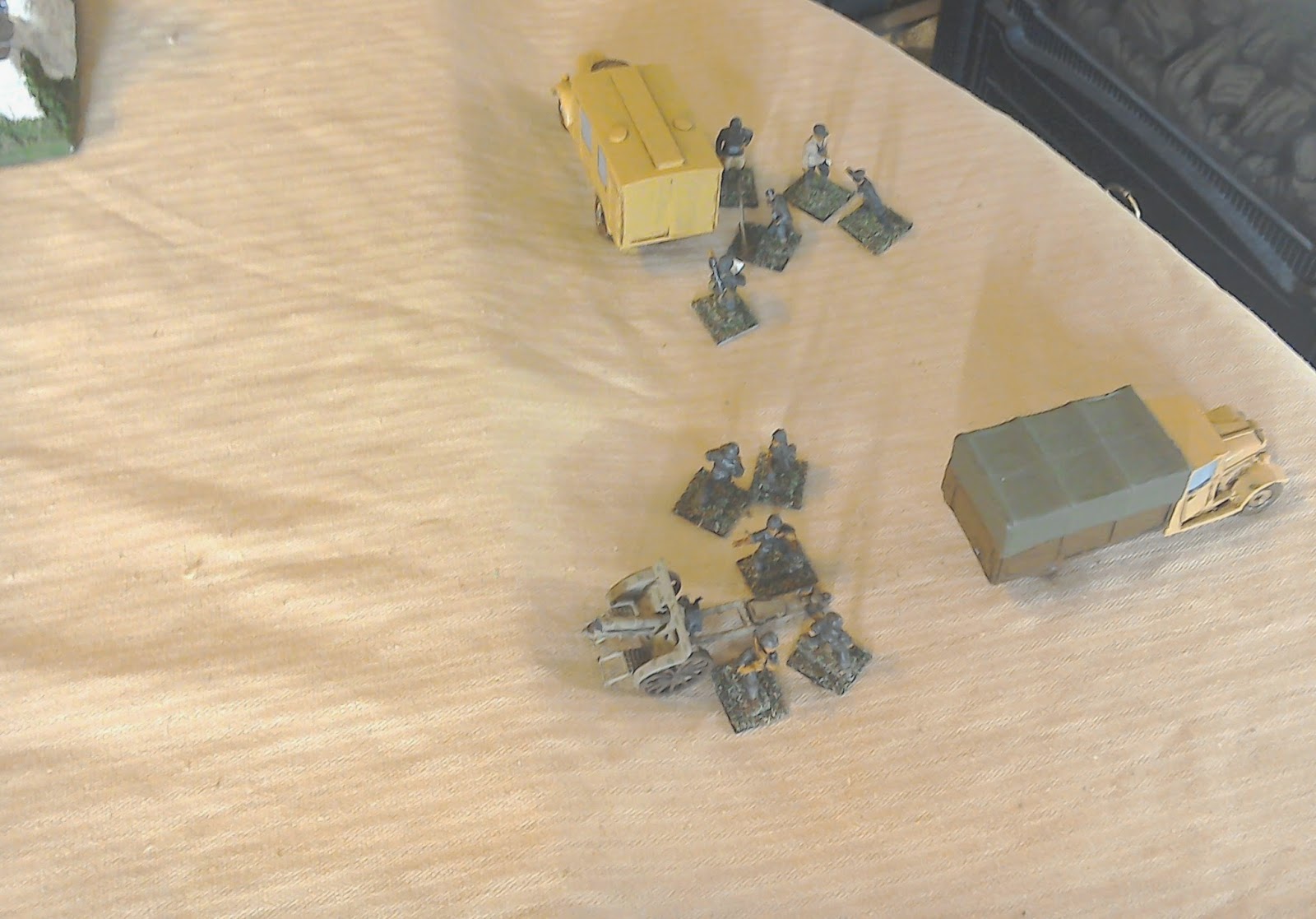 The M13s and Semovente surged through the centre and the 47mm battery limbered up to join them as the infantry cleared out the remaining French either side of the track. 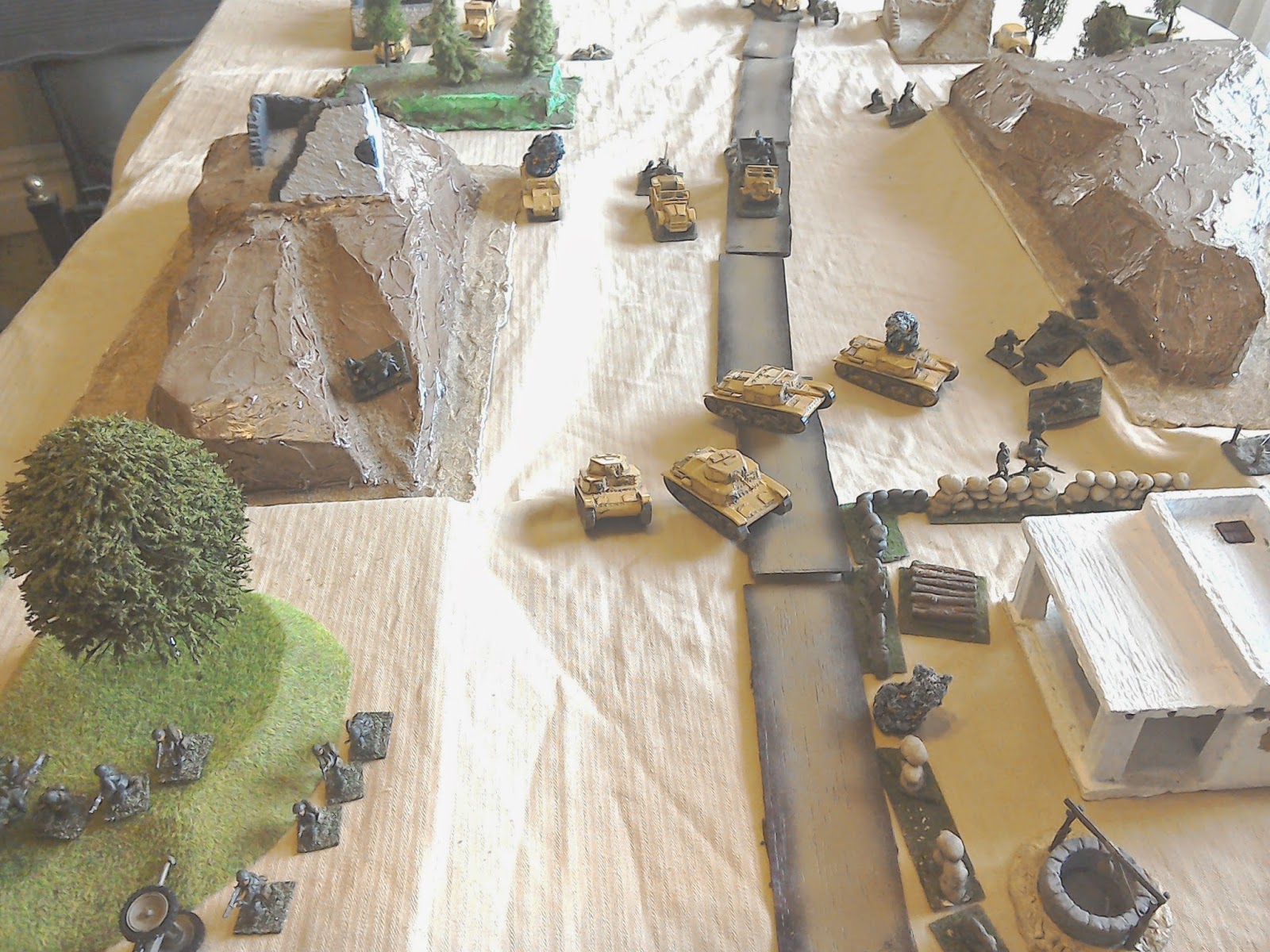 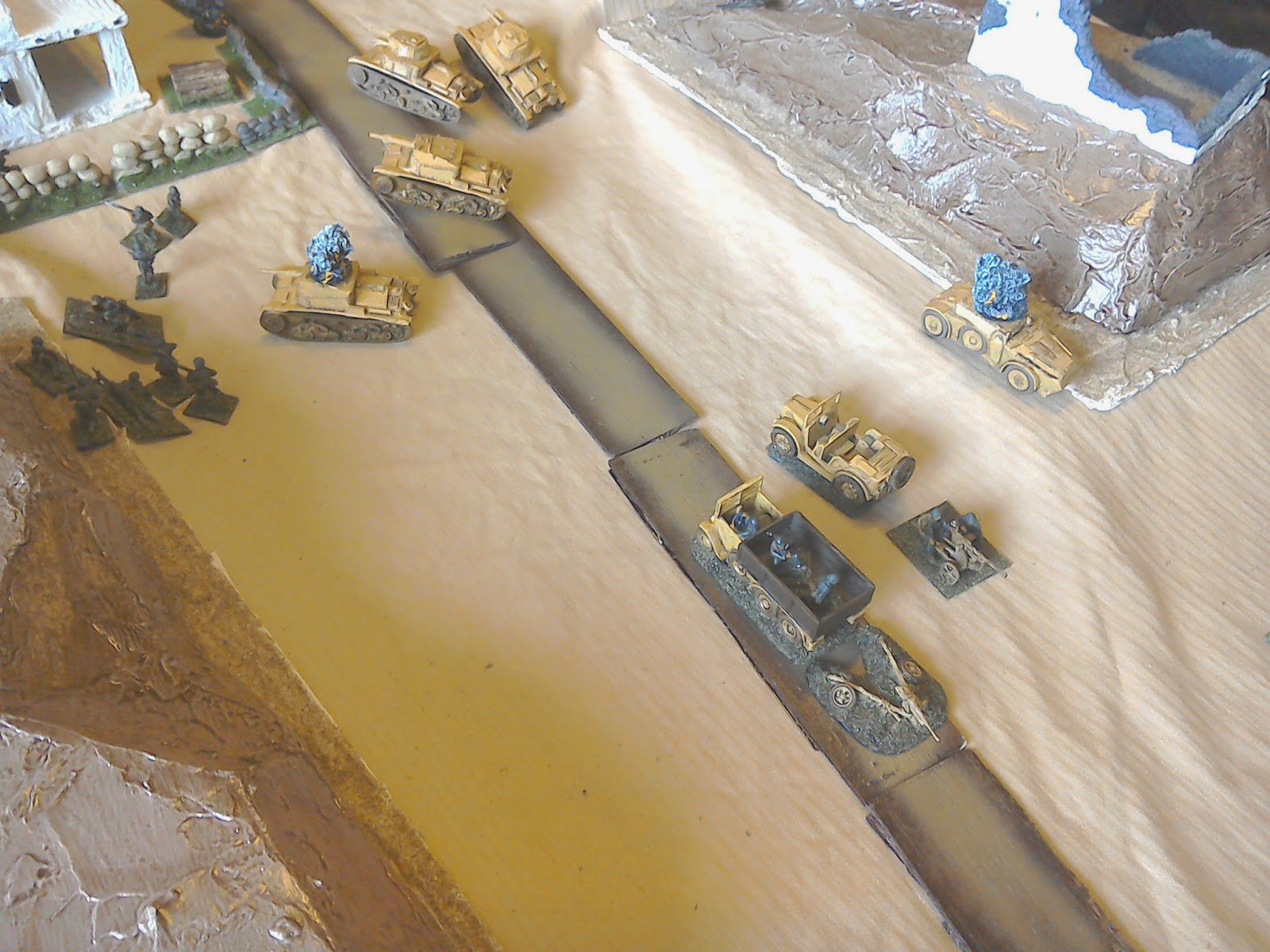 By turn 15 it was all but over, the French still had their mortars (but limited ammunition), with about a platoon of Legionnaires and Goumiers left, they were forced to withdraw as the DAK battlegroup entered the table. 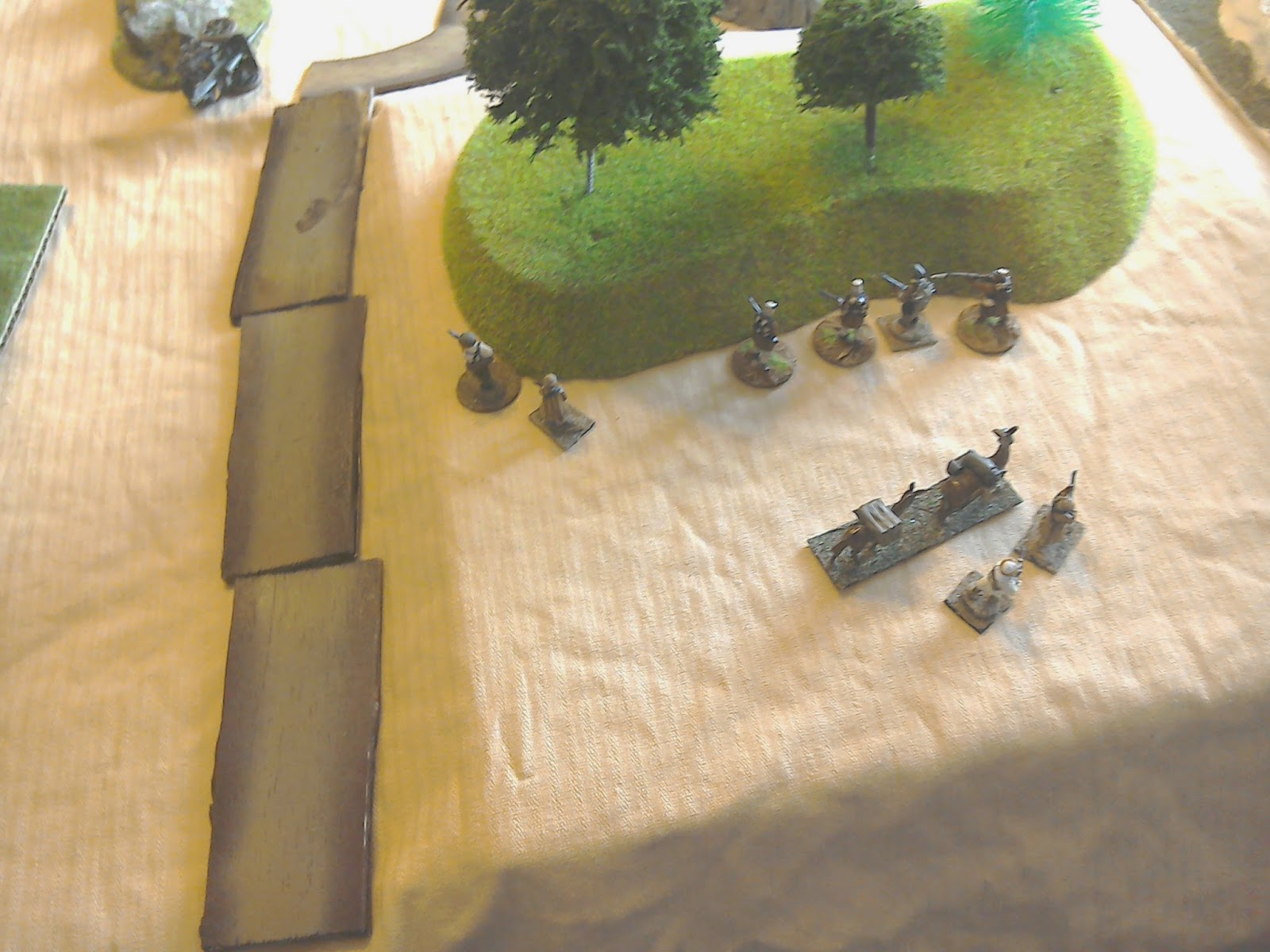 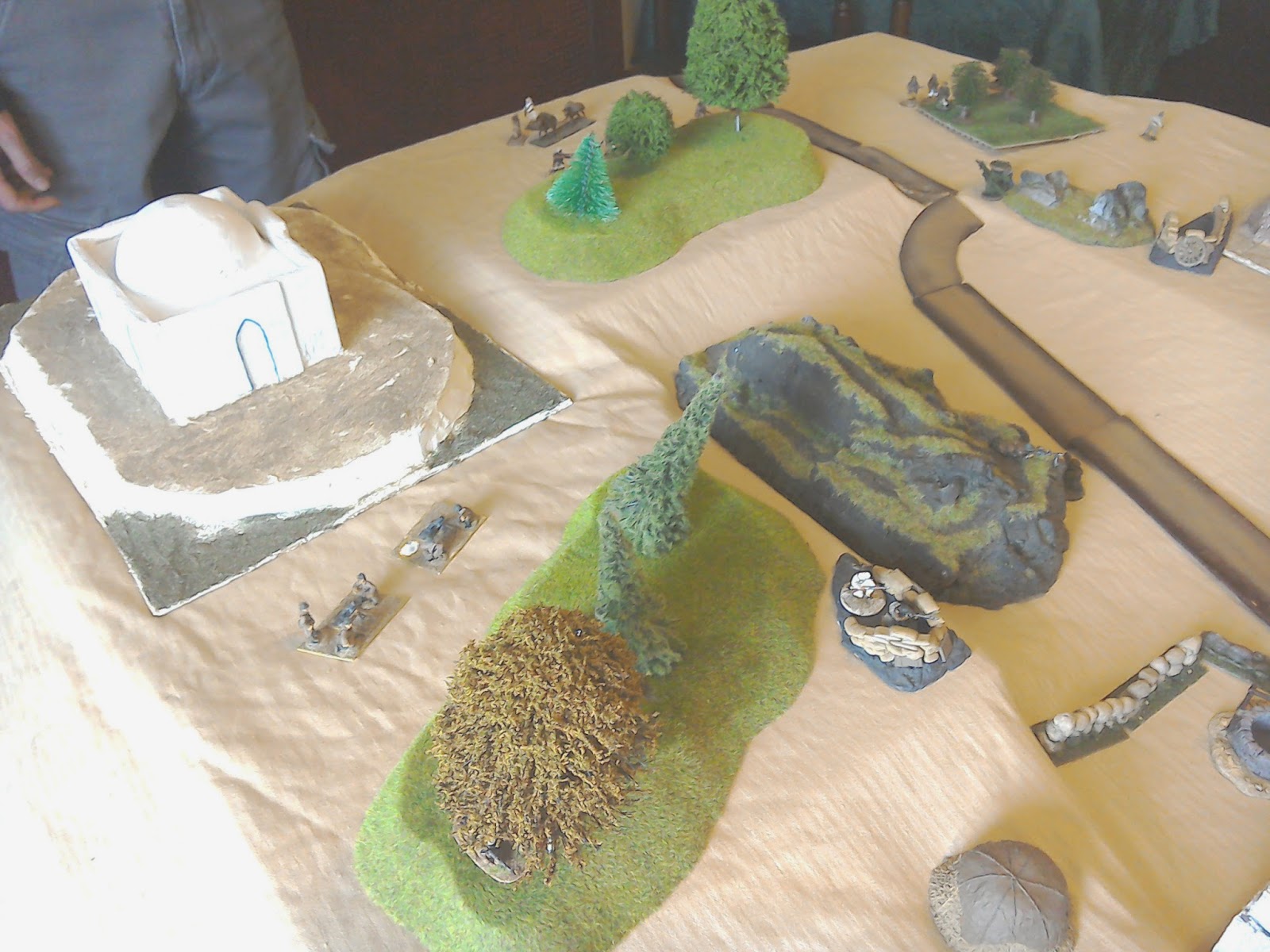