Pierre Le Gloan: The Frenchman who was a double Ace!

The Frenchman who was a double Ace!

An earlier version of this article appeared on the SOTCW website

Pierre Le Gloan was from Brittany, born in the Breton town of Kergrist-Moelou on January 6th 1913. The commune in France where he lived there is a street that bears his name. During his teen years, he won a civil aviation scholarship, funded by the French government, which gave him his first real taste of flying. Le Gloan applied to a civilian aviation school, intending to follow a career in aviation. 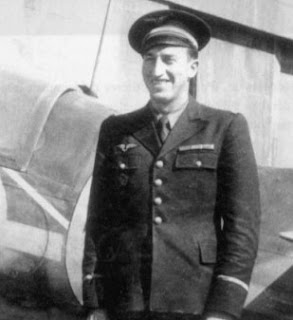 He joined the French Armée de l’Air in 1931, as soon as he was old enough to enlist. Before his death in 1943, he achieved Ace status (five kills) in the French Air Force twice — before and after France’s surrender (under the collaborationist Vichy regime). With 18 kills to his name, France’s fourth highest-scoring ace of World War II remains the only pilot in history to become an Ace on opposing sides of the same conflict.

When war came he was flying with GC III/6 fighter squadron, flying a Morane-Saulnier MS 406 from Chartresa  and, on 23 November 1939, he claimed his first kill, a Dornier Do 17 reconnaissance aircraft. A second Do 17 fell to his guns on 2 March 1940.

On 1 June 1940, Le Gloan's squadron was moved towards southern France to Le luc airfield and re-equipped with the new Dewoitine D.520 fighters; their mission was to protect the port of Toulon.

Le Gloan (in plane number 227) lost no time in taking full advantage of the better fighter. During the Battle of France in the summer of 1940 he had a hot streak. In June, he shot down two German Heinkel He 111s and two Italian Fiat BR 2 bombers. The highlight of Le Gloan’s career was to come on 15 June. His squadron encountering a squadron of Italian CR 42 fighters, he attacked with enthusiasm, shooting down no fewer than three of them. On his return to base he came across another CR 42 and a BR 20. He attacked and shot down both of them.

Taking down five aircraft in one day has seldom been achieved by even the highest-scoring fighter Ace and Le Gloan was justly rewarded. His five-kill streak brought him up to 11 kills, well above the five required for Ace status. He was also promoted to 2nd Lieutenant to acknowledge his remarkable feat.

On 20 June his squadron was transferred to Algeria and, with the fall of France and the installation of Marshal Petain’s Vichy government, the French forces in North Africa were under Vichy command. 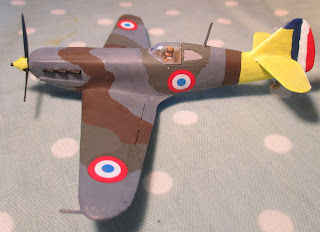 My model Dewoitine D.520 with the yellow tail as seen in Syria/Lebanon

His squadron was transferred to Syria and in June and July of 1941 took to the air to defend the colony from the British Le Gloan shot down six of the RAF’s Hurricane fighters and a Gloster Gladiator bi-plane. In Syria his plane No. 277 was lost after a bad landing caused by combat damage. He had taken down 11 for France and had added another seven for Vichy - four German, seven Italian and seven British. At the war’s end only Jean Demozay (21 kills), Marcel Albert (23 and two probables) and Pierre Clostermann (33 kills) ranked higher among French aces. Le Gloan was highly decorated for his successes – mentioned in despatches seven (7) times, the Croix de Guerre, the military medal and the Legion of Honor!

Le Gloan in his aircraft 277

The Allies launched Operation Torch in November 1942, invading Vichy controlled Algeria and Morocco. After just a couple of days the French forces returned to the Allied side, including Le Gloan’s fighter squadron.

The squadron was re-equipped in May 1943 with American Bell P-39 Airacobras, newly promoted Capitaine Le Gloan flying one of them. Unfortunately on 11th September, whilst on a training flight, Le Gloan’s aircraft developed engine trouble and he was forced to return to Algiers. Attempting to belly land his failing craft he forgot about the belly tank which Airacobras carried to extend their range. This tank should have been jettisoned before any attempt to land was made. This lapse led to the plane exploding upon impact killing le Gloan instantly. He was 30 years old. 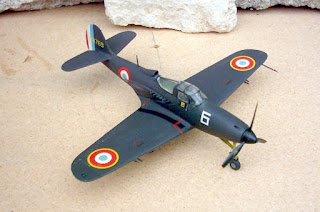 P-39 Airacobra in a French scheme

The numbers in brackets indicate the number of pilots involved the the incident, then the type of aircraft shot down and finally, the location of the crash