THE RELIEF OF KIPHISSIA AIRFIELD

THE RELIEF OF KIPHISSIA AIRFIELD 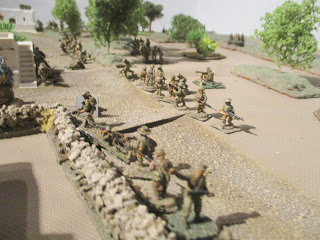 British infantry advance to the outskirts of the town 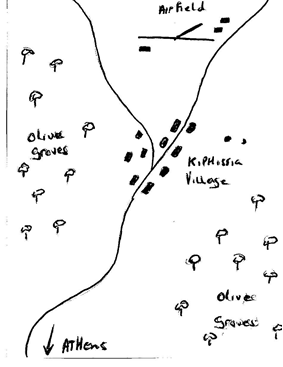 Way back in the day the then editor of The Journal Rob Rowell asked for volunteers to assist him with the magazine, I found myself raising my hand. This you understand goes against all my long standing beliefs (you never volunteer for anything). One of the first pieces Rob sent me was about a period of the war (and after) that I knew very little about, The Greek civil War (1945-49). The article provided some interesting options for tabletop gaming, but I wanted a scenario that would be historically based but challenging. I did a bit of reading and discovered this incident, the scenario layout is fictional but the action took place none the less.

After the German occupation of in 1941, there were a number of resistance groups that sprung up throughout the mainland and islands. These groups often fought amongst themselves as well as against the Germans and Italians. In October 1944, with the Germans withdrawing open warfare broke out between ELAS (Soviet backed) and their rivals from the right and centre of Greek politics. This “war” was as with all civil wars bloody and brutal, lots of old scores were settled permanently. In an attempt to restore some order. The British under General Scobie arrived and found ELAS strong in the countryside, but the British forces controlled and the other main centres of population supporting the Papandreou government in exile. By December the British were forced to bring in additional troops in the shape of 4th Infantry Division. These troops together with Paratroops (Prichards 2nd Independent Parachute Brigade flown in from ), tanks and air strikes; fought pitch battles for control of key towns. On December 18th ELAS forces overran the RAF headquarters at Kiphissia Airfield, with the capture of over 100 prisoners (both airforce and army personnel). For the British the 4th Division arrived just in time and with these additional troops Gen. Scobie went on the offensive. Part of this was an armoured relief column sent to Kiphissia, it is this action upon which this scenario is based.

British briefing you command a task force from 12 Brigade (4th Division). Your CO has ordered you North to the airbase at Kiphissia and recapture the airfield that has been taken by Communist ELAS partisans. You are warned that the terrorists have captured most of the RAF personnel and these could be used as hostages. Your orders are to proceed and secure the village, then move on and re-take the airfield whilst rescuing the RAF personnel. 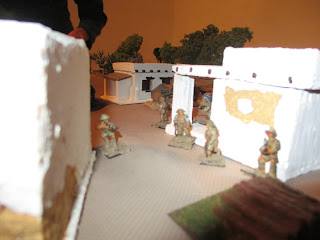 Infantry advancing cautiously through the streets

Greek (ELAS) briefing. Three days ago your comrades captured the RAF airfield at Kiphissia from the English. The airfield held stocks of supplies that will prove vital for the continuation of the glorious struggle.

Scouts have reported that a relief column is driving north towards Kiphissia, so time is short you split your forces sending a blocking force to the village to delay the column whilst the rest finish loading the vital supplies.

Lt. truck (packed with explosives and fuel) for ramming tanks!

The ELAS blocking force must hold the British for 10 turns. The explosive truck was an anti-tank tactic used by the lightly armed ELAS forces in built up areas. This should be parked hidden in a side street, then driven at speed into the leading tank. We decided that no “to hit” role would be required but the driver had to make a morale test. Once the tank is rammed the explosives blow up and the tank is engulfed in burning fuel, this should slow down the British advance! The ELAS forces can easily be routed by good tactical advance play by the British; the armour should cover this advance and not blindly lead it.

Options Replace the British Fusiliers with a platoon from 4th Parachute Battalion, an additional platoon could airdrop behind the airfield and cut of ELAS force from the hills (similar to the tactics later used in , driving the insurgents into a waiting ambush). 4th were by this time highly experienced so allow the ELAS force access to an RAF Bofors AA gun to use as an anti-tank weapon and beef them up with an additional squad with a captured Bren gun.

This conflict allows you to pit your eastern front partisan units against late war British troops.  The scenario allowed me to use my RAF refuelling set plus other pieces of soft skinned British transport on the table; my ELAS force was made up of a mixture of soviet scouts, partisans and volkstrum (ELAS often had no uniform and were dressed in civilian clothes). The civil war gives an unusual mix of possible figure types and weapons, Cromwells & Shermans with rocket firing Typhoons supporting the British, whilst the ELAS forces had Italian and German lt. artillery and mortars plus British and Russian equipment. As the conflict wore on the Greek army took over from the British although still equipped by them. Later still the supported the anti-Communist government and supplied them with war surplus equipment. This conflict also allows the wargamer some other interesting actions: In October 1944 “L” detachment of the SBS were parachuted onto Araxos airfield to assist in the clearing of Germans from the . Other SB and marine units were highly active around the Greek coast too; also on 12 October 1944, a company of 4 Para. were dropped to seize the airfield at , 30 miles west of so that the rest of 2nd Independent Parachute brigade could be flown in, what if ELAS resisted this drop?