Forcing a Crossing of the Zaccara Turns 1 - 10

Before I started there were some slight adjustments in the Republican deployments south of the river, both the 40mm mortar and anti-tank rifle teams moved forward to more effectively cover the road.

Also two Platoons of Moroccans started off table to the left, this simulates a flanking move, during which they advance at the same pace as normal before cutting in and appearing on table on turn 8.

The first couple of turns was taken up with a general advance, the only firing was the African artillery softening up the trenches in front of the lumber mill. 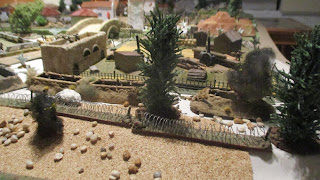 Moroccans on the left 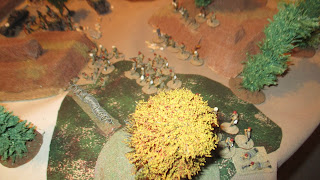 Legion and armour down the middle 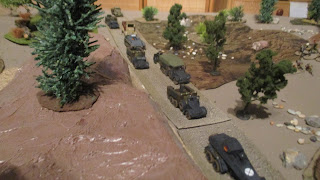 Carlists down the right 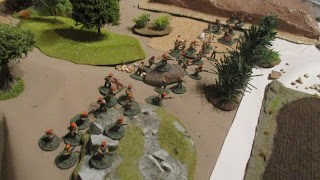 Turn 3 saw the Sd231 come within range of the first finca, it was hit by Lewis LMG fire (which failed to penetrate), it returned fire, but the solid building protected the defenders. The first two Legion platoons dismounted and prepared to move forward next turn, the 75IG unlimbered to give fire support. 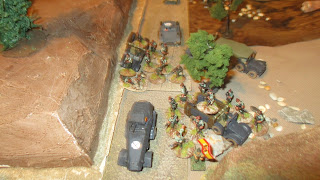 On the right The militia 1st platoon begins to take artillery casualties.

On the left dug-in militia exchange fire with the advancing Moroccans. 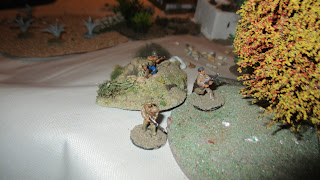 Once again the Lewis doesn`t hurt the 231, but in return the A/Cs 20mm and LMG rip apart the finca and kill everyone inside after rolling a lot of 6s & 5s...... The Legionnaires advance and IG misses its first shot!

On the right the Carlists are now within LMG range of the trenches and come under fire, artillery still drops among those trenches.

2nd militia platoon on the left breaks and runs! Luckily the 40mm mortar drops its first bomb dead centre onto the 231 (which was static still blasting at the finca), A tiny bomb combined with a 11 roll exceed the A/Cs defence value and the A/C is knocked out! 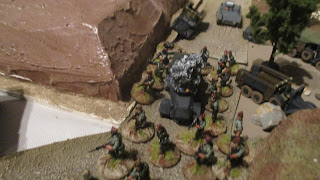 The IG hits the finca too 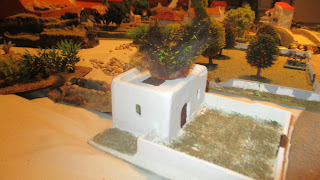 The legionnaires continue their advance along the road, though a couple of men do check the now ruined finca for survivors.

On the left the Moroccans continue their advance, slowed by barbed wire, shooting down the escaping militia as they go!

On the right the Carlists also slowed by wire advance under fire towards the entrenched 1st militia platoon. 1st Company HQ moves forward towards the trench line to reinforce 1st platoon.

Republican artillery opens up, the French `75 firing indirectly at the road and advancing legionnaires, the 40mm mortar also threw a parting bomb at these before running back to the safety of 3rd platoons positions by the bridge. 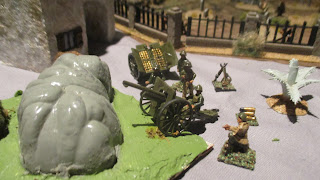 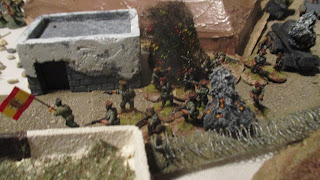 The 13pdr over open sights at the Moroccans streaming down the far hillside. 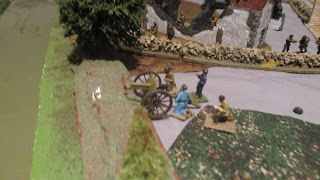 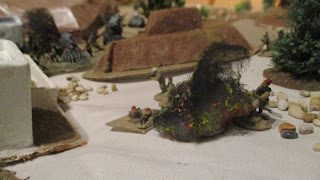 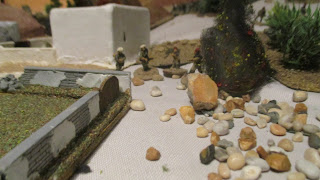 On the right the Carlists reach the main wire in front of the trenches, half provide cover whilst the rest scramble through. The 1st militia platoon even though supported by both 1st company HQ and a couple of Milicianas from 3rd platoon are now virtually wiped out and both they and the entire company need to make morale tests at the start of turn 8. 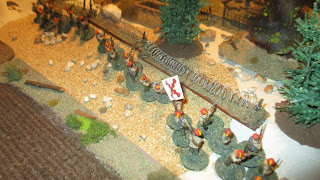 1st platoon break and run, the company test roll is shaky, so I decided the HQ orders a general withdrawal towards 3rd platoon by the bridge. The anti-tank rifle team withdraw with the remnants of 1st platoon, the 40mm mortar arrives at 3rd platoon too.

The legionnaires continue their advance along the road.

The Moroccans spread out and seek cover from the 13pdr, the two platoons arrive from their flank march un-opposed, with only their comrades to be seen..... 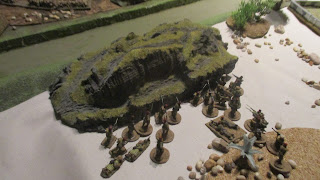 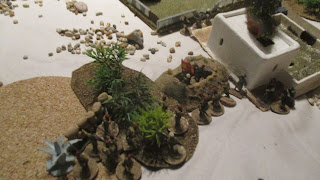 The Carlists continue to cross the wire and occupy the trenches 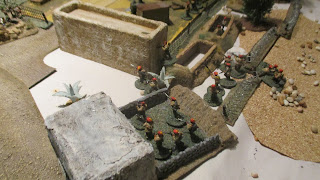 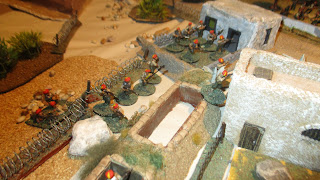 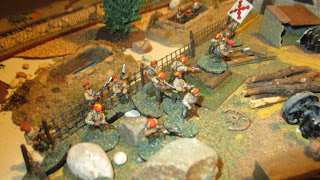 The militia retreat towards the bridge supported by their artillery, the rebels advance, reorganise and secure their gains ready for the next phase. 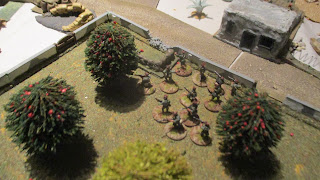 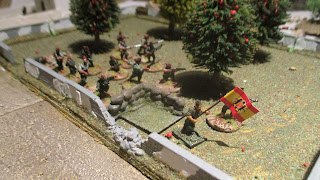 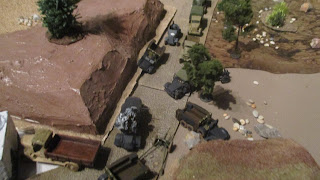 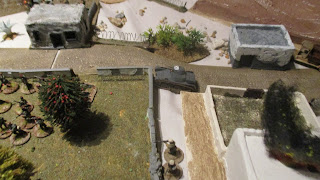 The African artillery limbers up ready to move forward. 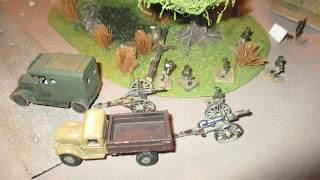 The Republicans prepare for the onslaught 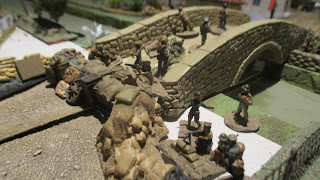