A Bullet for the General

A Bullet for the General 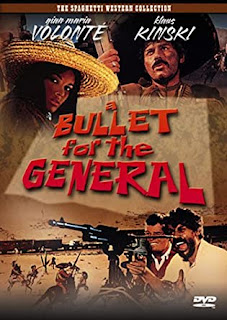 Filmed in Spain in 1966 and released the same year in Italy by Damiano Damiani, the screenplay and story are credited to Salvatore Laurani while Franco Solinas is credited with the adaptation and dialogue. Film historian Howard Hughes noted that A Bullet for the General was the first Italian Western to seriously deal with the Mexican revolution and credited Solinas with the political aspects on the film

The film is set in 1913, although no specific date is mentioned, we can guess the approximate period by the inclusion of Rurales which were disbanded by Huerta in that period.

The film starts with an attack on a munitions train heading for Durango by a bandit group led by El Chuncho Muños, played by the excellent Gian Maria Volonte - the bad guy from Fist Full of Dollars and A Few Dollars More! 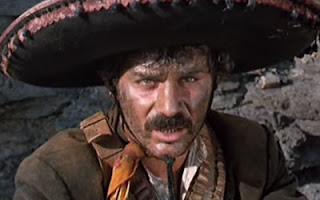 The train if forced to stop because a captured officer has been chained to the rails, any soldiers attempting to leave the train are shot down, the train commander - Lieutenant Alvaro Ferreira (played by that stalwart Aldo Sambrell) mortally wounded finally orders the train to escape over the poor captain!

The bandits give chase and can`t believe their luck when the train stops a little further down the line, The bandits slaughter the now leaderless Rurales and Chuncho discovers a young American in the cab and takes the lad under his protection as part of the gang. Chuncho tells "Tate" (who he calls nino due to his young age) that his gang are collecting weapons and ammunition for the revolutionary forces under General Elias.

The band which includes a couple of known faces from other Spaghetti westerns including the wonderful Klaus Kinski as Chuncho`s religious brother El Santo (a fine wild-eyed performance) and the beautiful and sultry Adelita (played with passion and style by Hammer Horror starlet and Bond girl Martine Beswick) with Nino/Tate in tow then proceed to carry out a few quite ballsy raids against the Federales and steal more guns and ammo. 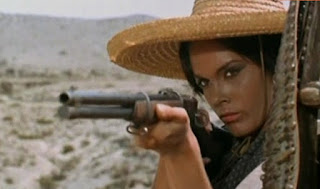 Whilst resting after one raid news arrives that a local town - San Miguel has been captured by the revolution. Chuncho and his band go there to celebrate with their companeros, they meet an old comrade of Chuncho who asks their help in arresting the local Don (rich landowner) which of course they do. Chuncho and the gang settle down to celebrate, but Tate argues they should move on and sell the guns to Gen. Elias, he manages to convince the other gang members who abandon Chuncho and his brother and the towns folk (in doing so steal a Hotchkiss machine gun).

Chuncho hunts them down, but is convinced to continue onto Elias with the guns and not return to the San Miguel. An Federale ambush leads to a great battle screen where Tate and Chuncho operate the 1914 Hotchkiss, you see Chuncho oil the clip and slide it home and then reload a couple of times - excellent detail! After the ambush everyone is dead except Tate, Chuncho and Adelita (who leaves broken over the death of her lover).

Chuncho and Tate head for Elias` camp, it is then we find San Miguel has been massacred, Elias blames Chuncho for running out and taking the guns and ammunition and sentences him to death! Before that can be done Tate shoots Elias and El Santo (who was about to kill his traitor brother).

Later we find Tate was actually a paid killer hired by the Federales to murder Elias and had been riding on munition trains for weeks hoping for a bandit attack that would lead him to his prey!

Great film, with good uniforms & equipment, some nice set pieces which can be stolen fro tabletop