John Preece asked me about suitable figures for Riffi.


Moroccans/Riffi in 20mm
The problem when I started was there are no figures for this period commercially available in 20mm so I have been forced to improvise. First things first the Riffi are Berbers, All the photos and illustrations I’ve seen show natives dressed in whitish Arabesque wrap around robes with baggy knee length trousers and either barefoot or with sandals. Over these were worn the traditional Moorish calf-length overcoat “Djellabah”, or Moorish cape “chilaba” a distinctive cape with a large pointed hood which would be traditional native colours of brown with white stripes. Headgear would if worn be the traditional turban or “Rexa”.

After much thought for the bulk of my riflemen, I settled on using SCW Regulares figures (from Bandera, Irregular and Barcino Miniatures) with Rexa (my rational being these figures actually represent Moroccans and would do). My thoughts were to paint each warrior with a pale sand coloured shirt; the baggy pantalones would be either pale sand or shades of brown. I decided that these men would be an elite drilled Harka so wear the official “green” Rexa (a badge of honour). These figures had a very military and ordered appearance with all their webbing and equipment, not quite what I was looking for, so I began to think “outside the box”!

My thought shifted to other wars where Moroccans have fought and settled on WW2 – the famed Goumiers of France! Now several manufacturers now produce Goumiers, but the best of these are – Friend or Foe Miniatures & Blitz Miniatures. Now I know these figures are kitted out for Italy with British Helmets, SMGs etc, but there are some gems among them for the more discerning wargamer. Friend or Foe have three different figures wearing Djellabah and Rexa carrying rifles (one with a wicked dagger as if advancing on a sentry), one of their mortar crew is also without helmet as is the guy with the pack mules. I painted the Djellabahs in various shades of brown (using an ink wash for the first time to bring out the detail); I picked out any under lying clothes in pale sand and again painted the Rexa in green. Blitz Miniatures are my favourite 20mm manufacturer at the moment and do some excellent figures; their Goumiers are some of their best. They have four variants armed with Mauser rifles, I was cheeky and asked Stuart Clarke of Blitz (Battlefield Miniatures) for 5 of each rather than having to buy multiple packs of
figures I didn’t want. He was generous enough to agree, which gave me twenty Mauser armed warriors, a little trimming to remove grenades or other WW2 items of kit, then a paint job as above, hey presto – Riffi warriors!
Support weapons, Now the Riffi army had access to modern weapons, either stolen from the Spanish or bought off gun-runners, I would need some of these too. These were acquired as follows:

1. Irregular Miniatures do a Regulares figure in Chilaba standing holding a Hotchkiss LMG resting on the
ground (not a great combat pose!).
2. A Bandera Regulares Standard Bearer was given a Lewis gun (off the old Matchbox LRDG kit) to carry
instead of his standard pole.
3. Another Bandera standard bearer (this time with a bomb replacing his pole) & an Irregular figure
manned a mortar.
4. Blitz Miniatures do an excellent Hotchkiss MMG team, the gunner wears a Rexa, a quick head-swop and
so did the number two!
5. a couple of Irregular Moroccan gunners and a couple of Hat British WW1 Horse Artillerymen, with added
Rexas modelled on with putty, manned a Bandera 65mm mountain gun.

So there’s my Berber army, thirty-three rifle armed warriors, two LMGs, one MMG, one mortar and one
mountain gun. Now this obviously isn’t enough for more than a small level action and I wanted more than
that, so I began to look at Abd el-Krim`s Arab allies.

I wasn’t planning to spend a fortune and luckily I had a few boxes of old Airfix Arabs knocking around (bought off Ebay as a job lot); these provided 24 running, kneeling firing, prone firing and crawling Bedouin. A box of Esci Muslim Warriors added 22 more rifle armed Afghans, Pathans, Indians, etc. The Airfix set also gave me some lowland Arab cavalry, nine of them, to which I added four Mahdists from Waterloo 1815 though I replaced their mules for horses. The Arab allies were not the best soldiers El-Krim had so they got less of the spoils of war but B&B Miniatures do an Arab irregular Vickers MMG team in their Allenby’s War range, I removed the Vickers and replaced it with a Bandera Hotchkiss to give the Arabs a support weapon.

Update
Since I wrote this when my Riff War Guide was published by TooFatLardies I`ve discovered several new sourses and added more bits to my Riffi Army.

Tumbling Dice do a whole range of WW1 era figures among these they have Arab Revolt figures in Bedouin dress both foot and horsed/camel mounted.
The wonderful David Reasoner through his Moonlite Modelwerks do 65mm mountain guns and Vicker-Maxim 2.95" guns (and French `75s too) crewed by various Airfix Arabs and converted WW1 gunners, these add considerable artillery to my force.
Early War Miniatures (orginally Tom`s Tins) produce a small 5 figure pack of French Spahis cavalry, these with head-swops using Raventhorpe turban heads give you four rifle armed and an LMG - simples :-) 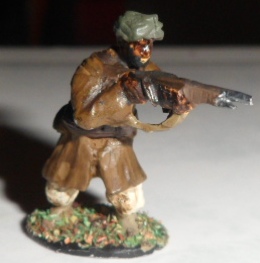 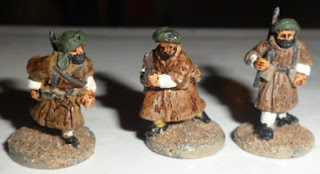 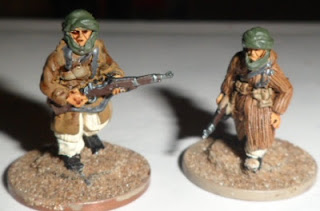