As you may know I`m the editor for the SOTCW (Society of Twentieth Century Wargamers) magazine - The Journal and have been doing so now since issue #52.
Well Journal issue #78 finally arrived on my doormat yesterday 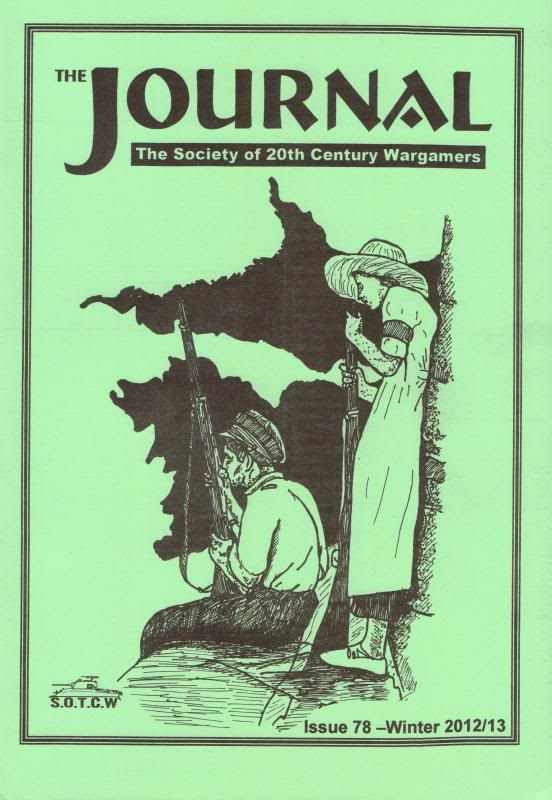 In this issue you will find -Drive on Smolensk (a mini-campaign for Spearhead)Tunisia 1943 (coastal naval mini-campaign)Falklands Refight - a scenario/AAR for Shipwreck rulesDrive on Madrid (Blitzkreig Commander in the SCW)Stalingrad & Stalingrad Revisited (game reports from Gauntlet 2012)The Drive North (part 2 of Chris Stoesen`s Peace in Galilee campaign)The Landings at Saafi (Operation Torch scenario)Italian East Africa 2 x Cold War scenariosA skirmish in the Ardennes 1944Great War orbats for Rapid Fire! rulesAnd a few other interesting bits too

Plus all the usual columns.This issue also announces the Great SOTCW Giveaway! So if you haven`t re-subbed or just fancy a chance at loads of FREE stuff, get your memberships in ASAP. You can join/re-sub via Paypal on the websitewww.sotcw.comI`d like to thank everyone who contributed to this issue.
Posted by Richard B at 01:05

Email ThisBlogThis!Share to TwitterShare to FacebookShare to Pinterest
Labels: SOTCW