The history
After a couple of frustrating months pursuing Pancho Villa and his bandits across the hot and dusty Mexican hills; a report reached US forces on May 4th that a group of Villistas numbering about 200 under the command of Julio Acosta was camped at the Ojos Azules Ranch. This force had just defeated a federal force under the command of Major Lopez and it was this Major who was now asking for US military help to protect the nearby town of Cusihuiriachic from further attacks by the Villistas.

Major Robert L. Howze assembled a force of six (6) troops of 11th Cavalry, a machine gun troop, a pack train (with 3 days supplies plus ammunition) and 20 Apache scouts under the command of 1st Lt. James A. Shannon, approximately 320 men in total.

On arriving at Cusihuiriachic, Howze discovered that Lopez had received orders not to assist or cooperate with the US force, so was forced by circumstance to hire a local Mexican doctor as a guide. Howze ordered his force to perform a night march in order to achieve complete tactical surprise. Upon arriving at the ranch just before sun-rise Howse conceived a plan for a all round envelopment with his Apache scouts moving in a wide flanking movement to seize the high ground behind the ranch whilst the rest of the command advanced covered by the machine guns, one troop directly whilst the others moved on from the left and right. A simple plan, which began to unravel almost from the beginning - delays in positioning of the attacking columns meant the defenders had a little warning. The Apache began firing long before they got within effective range (over 800yds out) and the adobe buildings were stronger and more formidable than they first appeared.

Even with all these problems the scouts and cavalry bravely charged the ranch overcame the Villistas resistance. Surprisingly not one single US soldier was injured, whilst 61 Villistas were killed and another 70 captured in a very one-sided battle! This action was the first in US military history where they used over-head machine gun fire to cover an advance.

The terrain
Undulating terrain and plenty of scrub cover, the highest point should be positioned behind the ranch (from the cavalry’s point of view). The ranch itself should have several adobe buildings around a large hacienda (think High Chaparral); plus a wooden barn and corral, the whole complex surrounded by both wooden and some barbed wire fences (which would act to impede the cavalry).

Historically the Mexicans must have been either awful shots or of woeful morale (considering the casualty figures), this should be taken into account when setting up the game. You could of course just run this as a straight attack/defense game and see how it comes out.

Our game, I recently spent an enjoyable few hours watching “They Came to Cordura” an interesting film (1959) [Great uniforms and equipment on display, including Benet-Mercie LMGs]. In which Gary Cooper is given the task to take several “heroes” of this action back to base and safety, so they can be used to promote the courage of the American soldier and encourage enlistment for the army (who the high command know will soon become embroiled in WW1). A convoluted plot, but the highlight is a reenactment of this battle which included a massed cavalry charge against a prepared Mexican enemy - fictional heroics and seemingly large numbers of US casualties!

So I decided to alter the action to include elements from the film, plus additional equipment on both sides (allowing me to field my entire US Army) – making a battle of it. 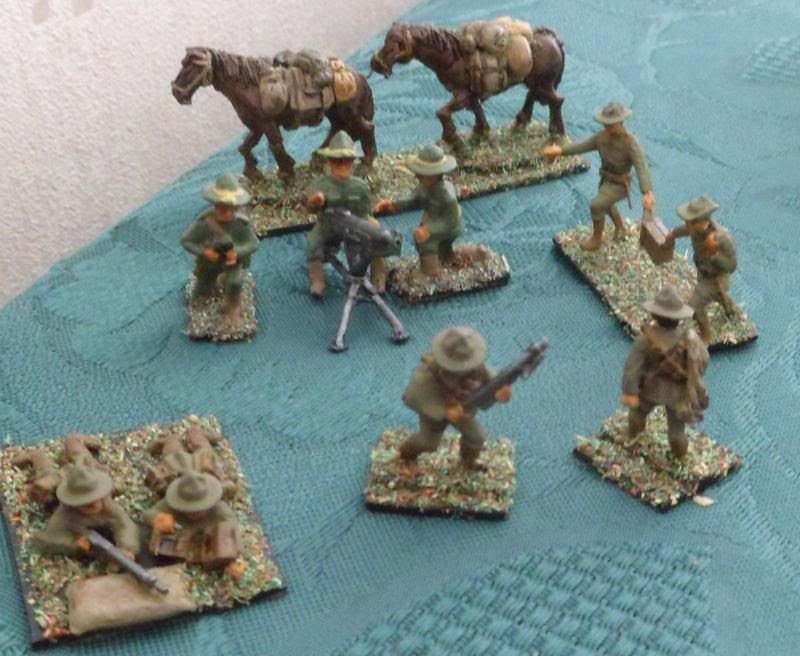 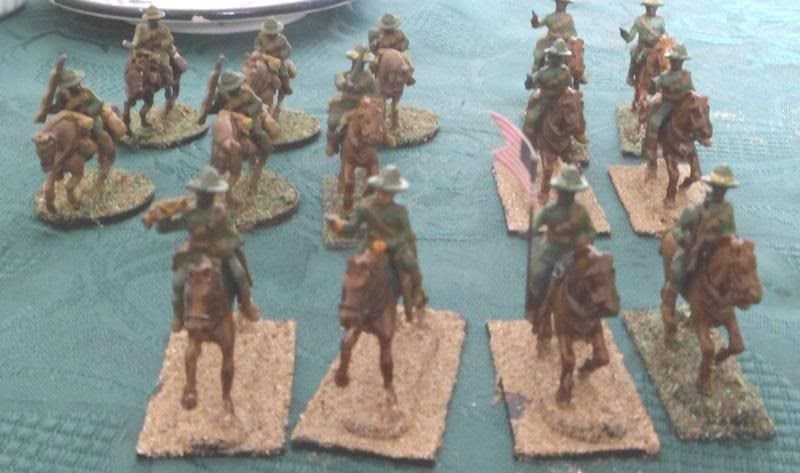 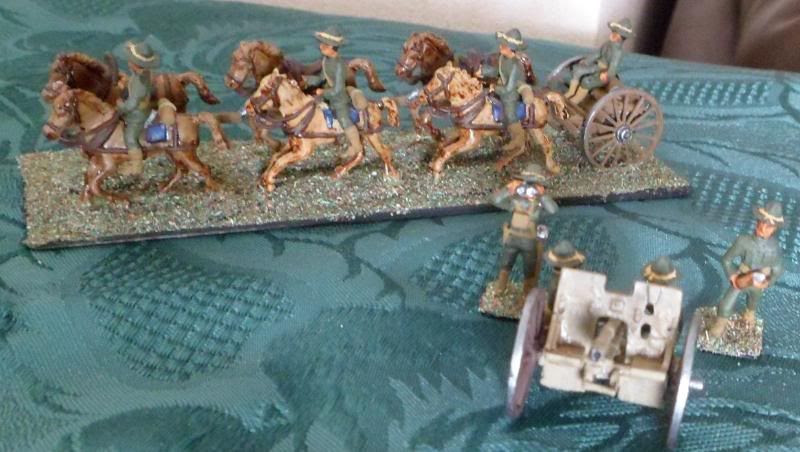 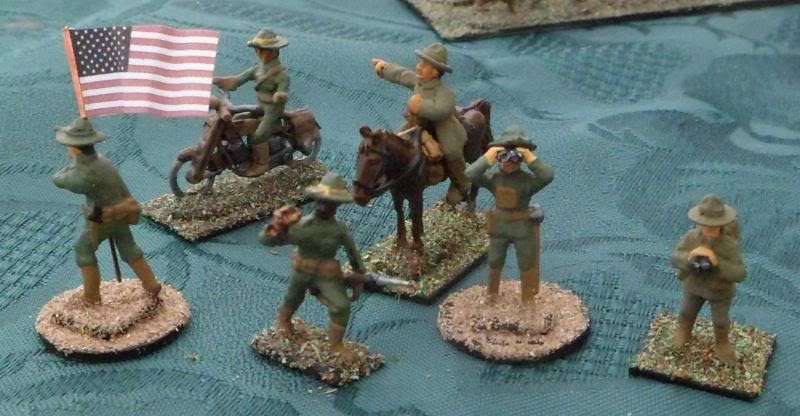 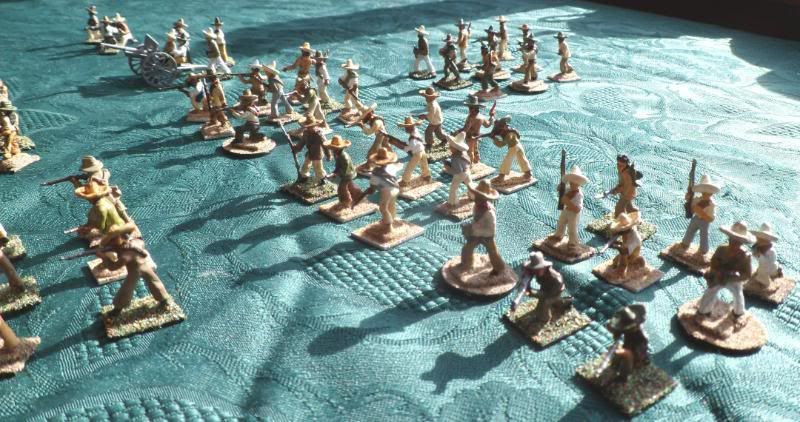 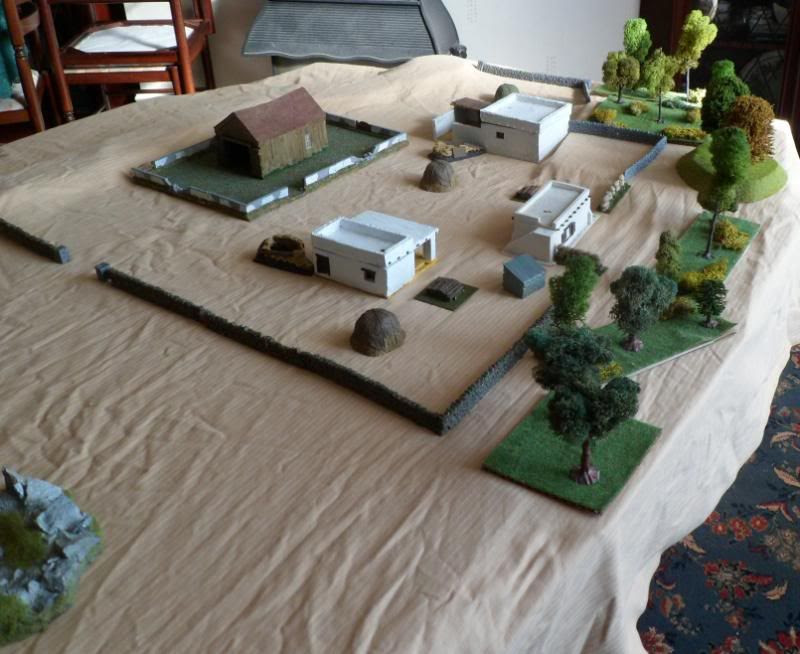 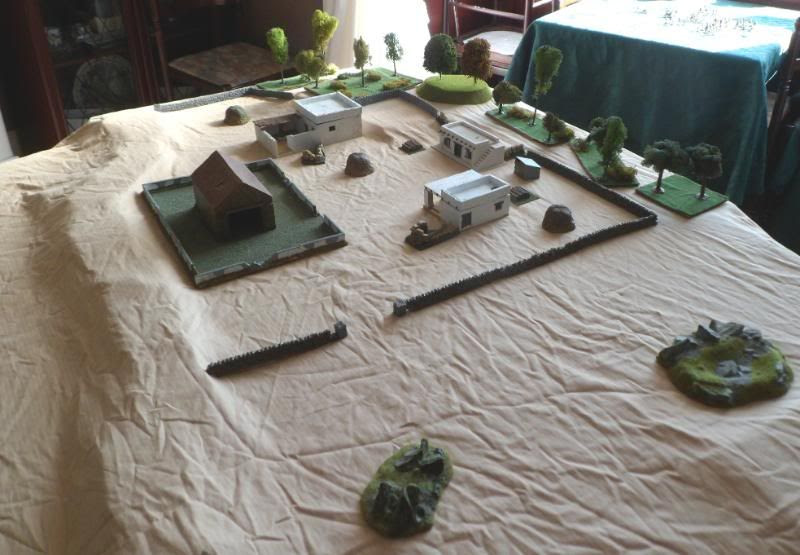 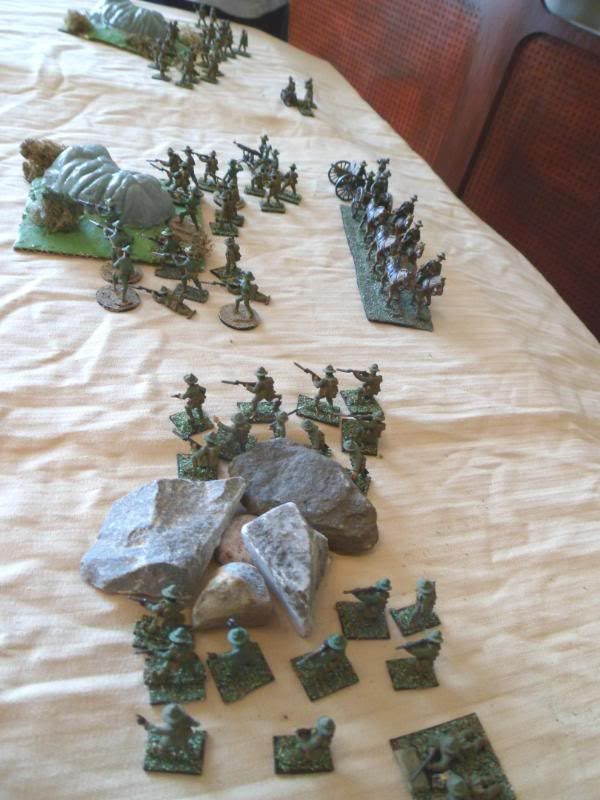 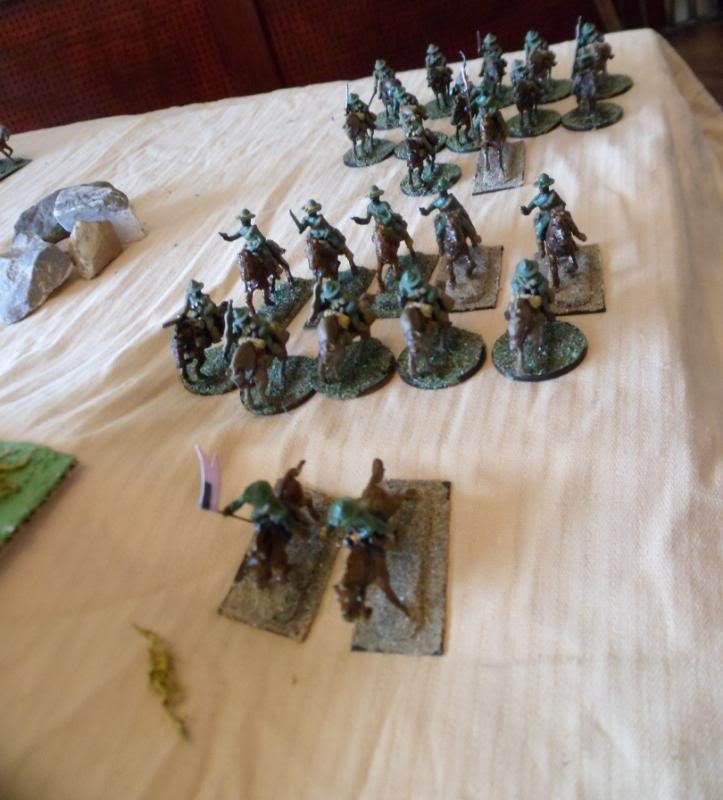 “A” troop burst out of the river into the ranch A nasty surprise the `75 was hidden in the barn! 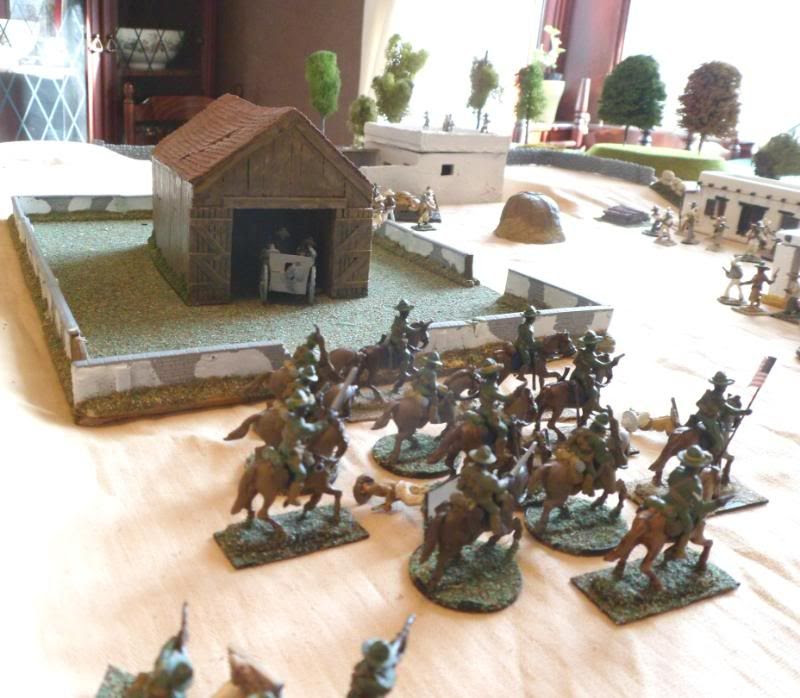 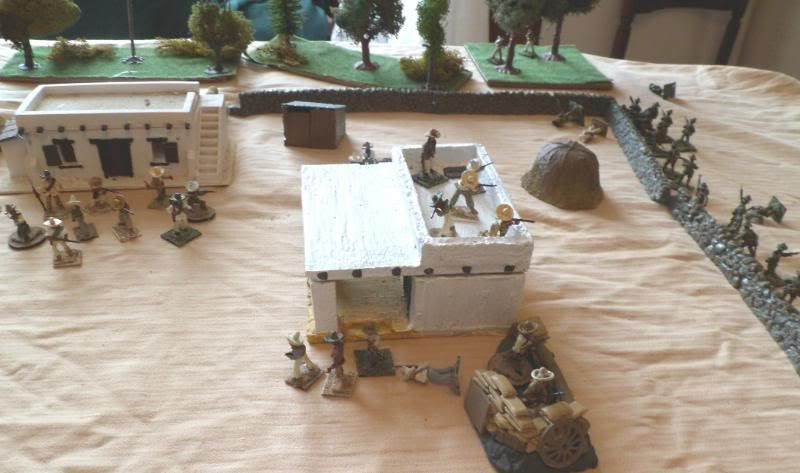 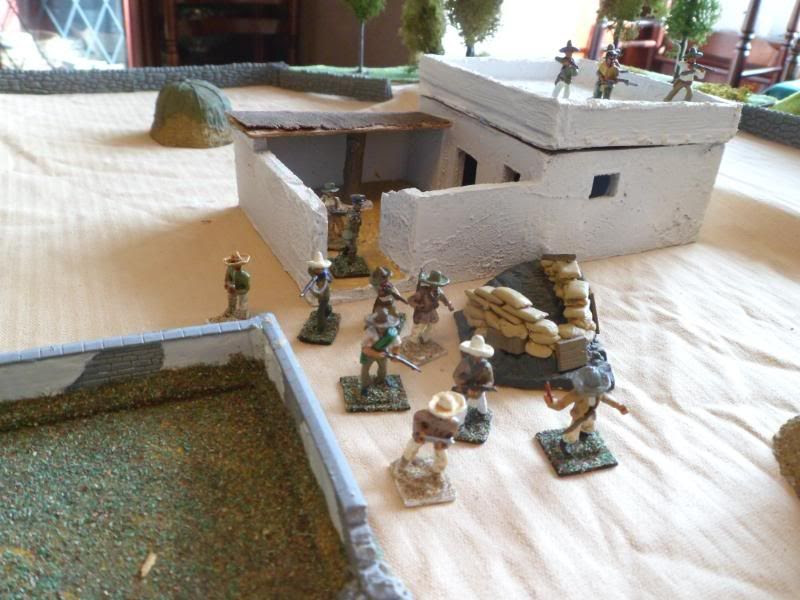 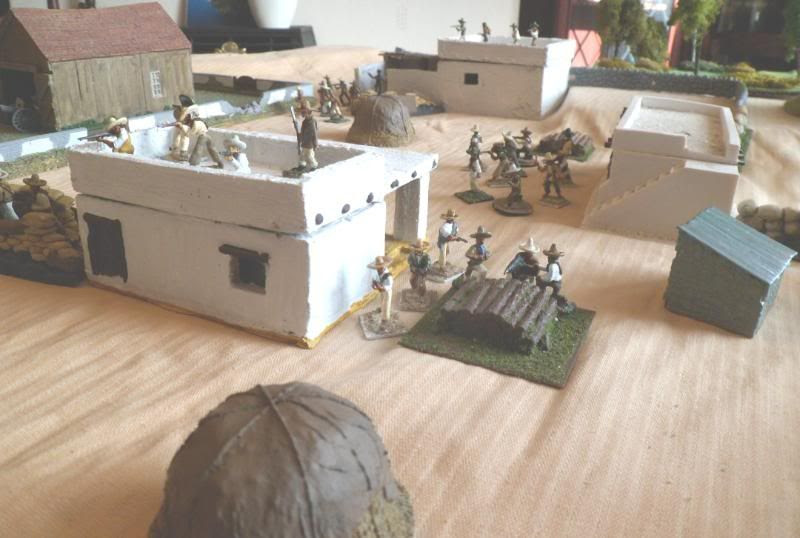 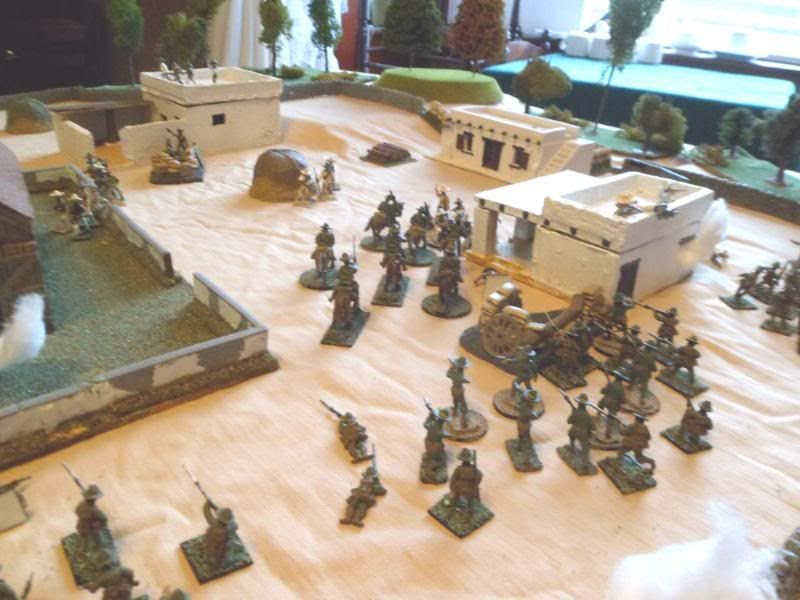 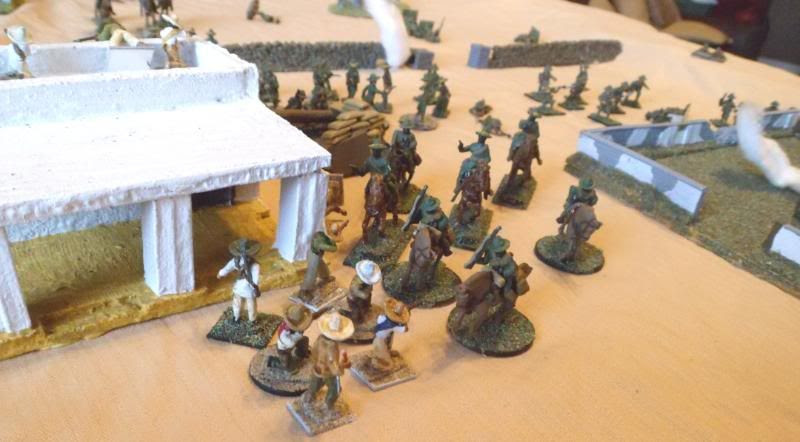 The action began at dawn, it was decided that only two Mexican units (9 figures each) could be activated the rest sleeping until the alarm was raised at which point 1D6 turns before they could activate. I placed 4 men in two pairs way out infront of the ranch and it was these who spotted the advancing Yanks at the end of turn 2. An exchange of rifle fire (plus a burst of Benet-Mercie LMG fire) alerted the ranch to the American attack.

For the next three turns the Yanks continued their general advance, skirmishing with my pickets and eventually engaging the outer wall and remains of my “on duty” Mexicans. Support fire from the 2.95” and 77mm plus the machine guns proved devastating and the two mounted troops began a out-flanking move through the river bed on the Mexican right. Mexican riflemen in the woods on the far left plus other in the bunkhouse caused casualties and slowed the advance until wiped out - several 2.95” hits on the bunk house and a peppering by the Colt MMG cleared the way by turn 7.

The flanking cavalry split with “A” troop leaving the gully at the first wall to outflank the defenders there, “B” troop carried on to the rear of the ranch. “A” troop had a nasty surprise when they were hit with canister from the `75 hidden in the barn; this gun then duelled with the attacking infantry and dismounted cavalry until all its crew were killed or wounded (turn 10).

The final 3 turns were a wild melee with mounted & dismounted troopers, infantry and the Mexicans in the centre of the ranch among the haystacks and buildings. Pistols, rifles, machetes, bayonets, grenades and even dynamite were used to clear houses and kill or disable the enemy. Suddenly “B” troop appeared in the Mexican rear and Col. Acosta decided enough was enough and surrendered his remaining fighters.

Good game, slow start, ending in a brutal close engagement.
The Yanks out-numbered the Mexicans by 2 : 1 in men, 3 : 1 in machine guns and 2 : 1 in cannon; number told in the end as the Mexicans just couldn`t inflict enough casualties on the various Yank units to break their morale. Good use of support weapons and coordinated attacks carried the day for the American commander.