The Battle for San Christobel

This is the first in a mini campaign I`m running with the lads in an attaempt to get them thinking ahead towards future battles, re-supply, reinforcements, etc
The Battle for San Christobel

My attraction to these weird and wonderful periods comes from my miss-spent youth watching western movies. This particular scenario takes elements from two of my favourite Mexican Revolution era films – Vera Cruz (with Burt Lancaster & Gary Cooper) and Bandito (Robert Mitchum). Basically in Vera Cruz, Cooper and Lancaster escort a convoy to the port through rebel held territory; whilst in Bandito; Mitchum an American mercenary tries to locate a shipment of arms so he can sell them to the rebels.

With these two reasonable plots to work with, I decided to start with a port town, where a shipment of arms is being landed for the Federales. This shipment – ammunition, machine guns and some artillery could well alter the balance of the war in this state. The local rebel commander has learned about the shipment and is committed to attack the town and seize those arms for the revolution. If the attack succeeds, this can then lead to a federal counter-attack or convoy game with the rebels trying to ferry their spoils back to their base. Or if the attack fails the federals must then transport their arms to their main base leading to another different convoy game (maybe with a train).

Background
Colonel Jesus Razza commander of the revolutionary forces in Tamaulipas State has been informed by sympathizers that a cargo of modern arms and ammunition has arrived by sea at the fishing port of San Cristobel. Such a cargo may well alter the balance of power within the state in the favour of the federales, this cannot be allowed.

Col. Razza has decided to attack the town with all available men, a desperate but calculated gamble. The garrison is small and the pay-off for success would be a huge boost for the revolution (and Col. Razza’s reputation).

Special note
The rebels have infiltrated one unit into the town, these can be hidden in any two buildings (6 figs per) and can become active at any turn as required by the rebel commander.

San Cristobel
A small fishing port on the Mexican Gulf dominated by an old Spanish fort, a rail line runs from the dock across country to the state capital Ciudad Victoria. The dock itself has a large warehouse and customs building, which doubles as the rail depot.

Usually the town has a small garrison (a couple of platoons from the local Federal regiment). But due to the strategic importance of the arms and ammunition, additional troops have been sent to escort this valuable cargo to the capital. The State Governor has sent some of his feared “Colorados” irregulars and an artillery piece to boost the garrison and act as escort. A problem arose when there was no engine available to pull the trucks of arms. So a desperate search has begun to locate a suitable engine and get it to San Cristobel; if the engine arrives the dismounted Colorados will ride in the wagons and the 37mm Hotchkiss will be placed on a flat-car; the mounted men will move flanking the train. If not the arms must be loaded onto horse-wagons and transported by road, a far longer trip raising more dangers of rebel attack!

A group of armed sailors [from the ship] - 8 men

Note
Half of all units are “off duty” and take 1d3 rds to activate once the alarm is raised. Half a Federal squad is on wandering patrol, half manning the fort battlements. The Hotchkiss crew are off duty, the weapon guarded by a Colorados sentry. Half the armed sailors are guarding the ship/dock.

AAR, fought with my lads today on a 4 x 8 table
Sketch map 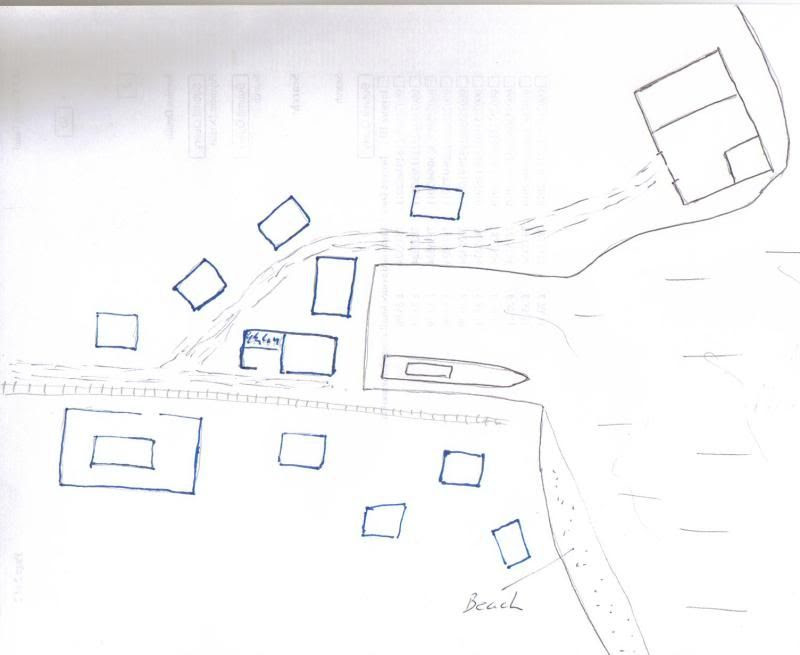 Several views of the table 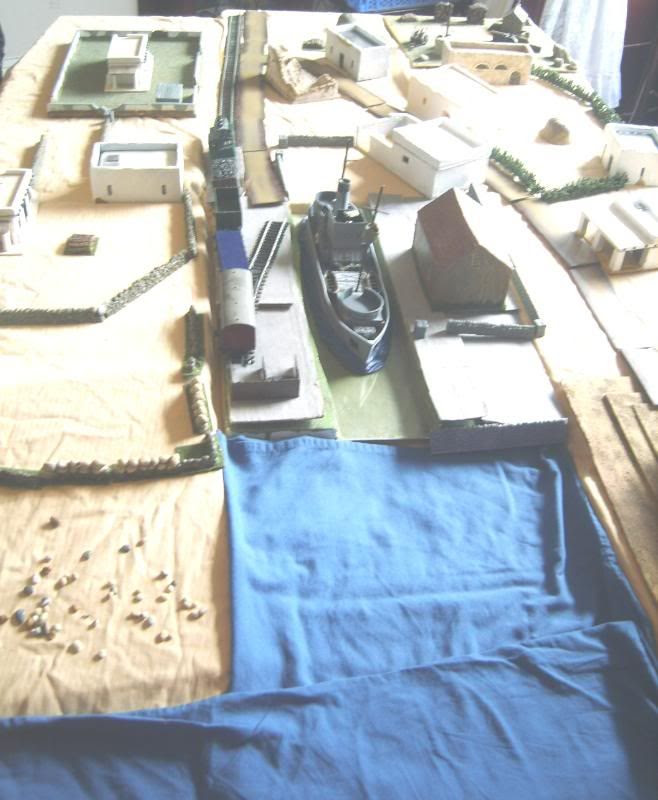 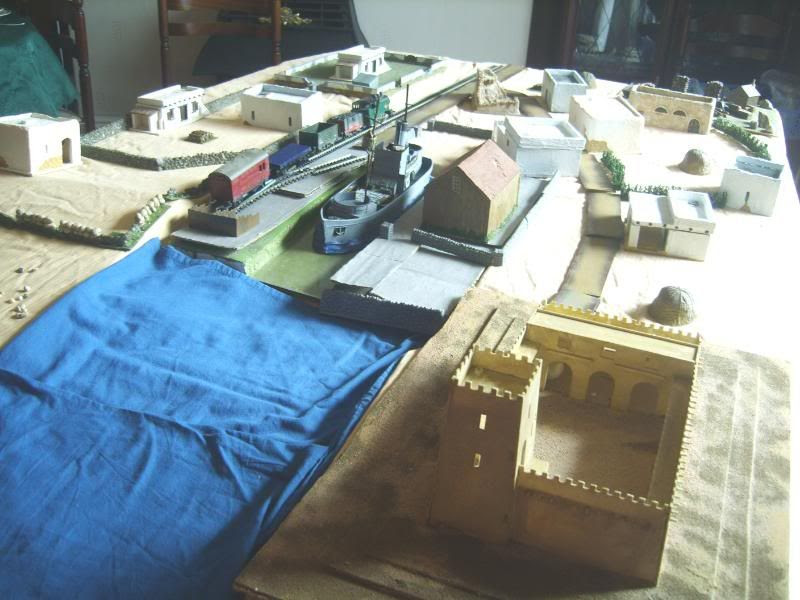 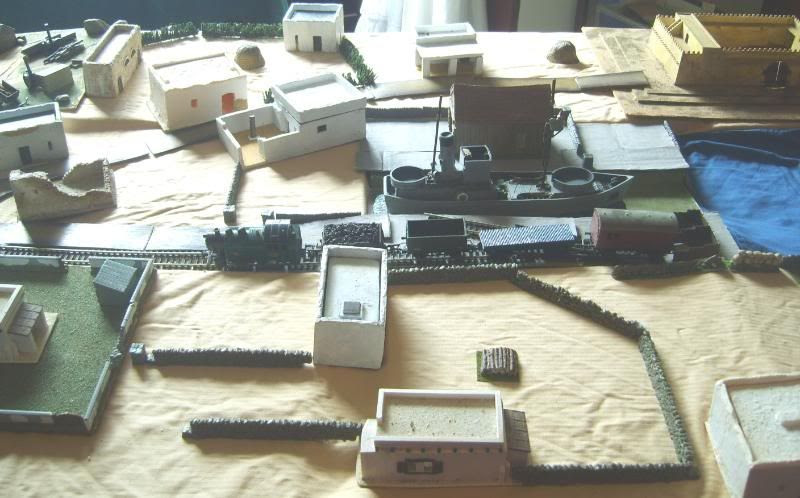 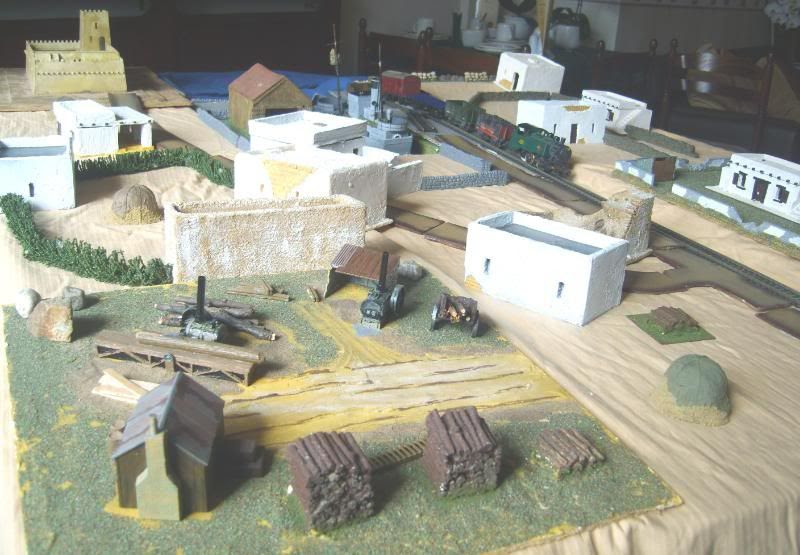 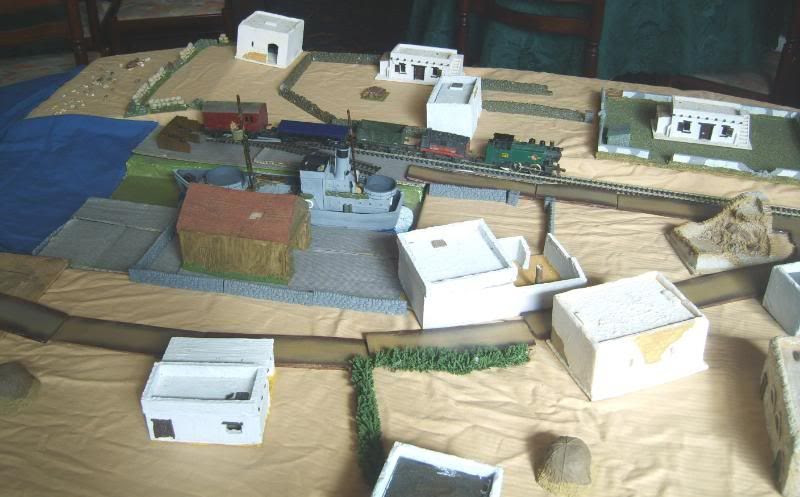 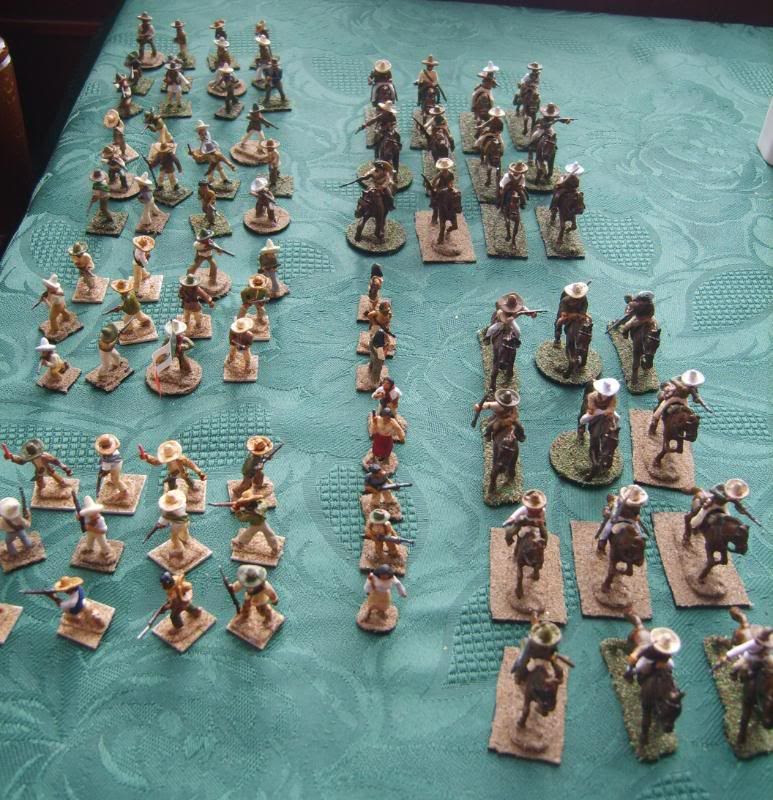 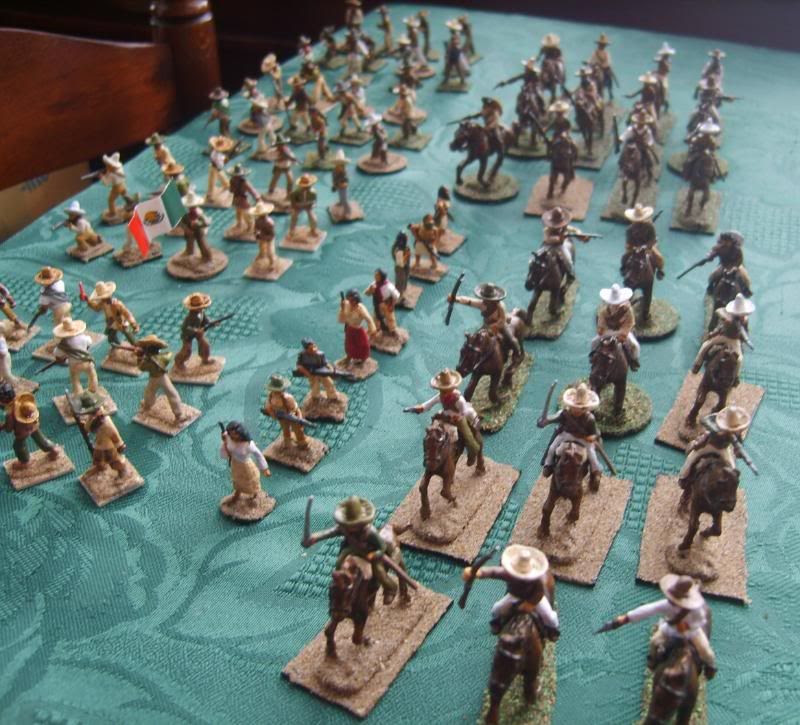 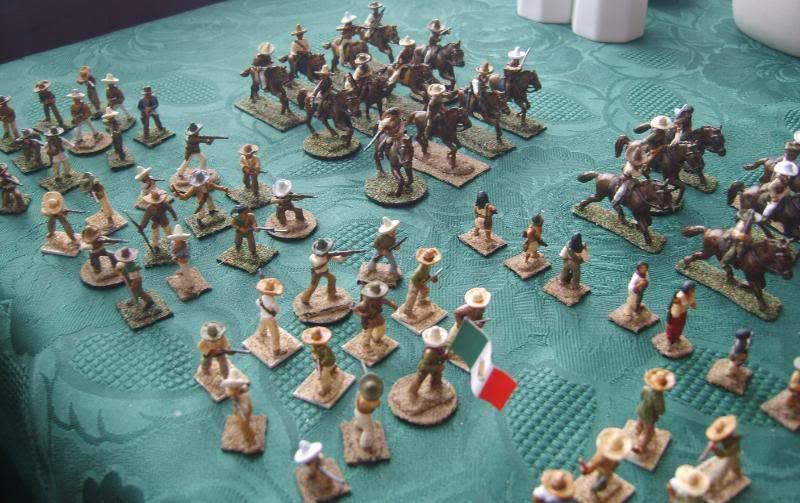 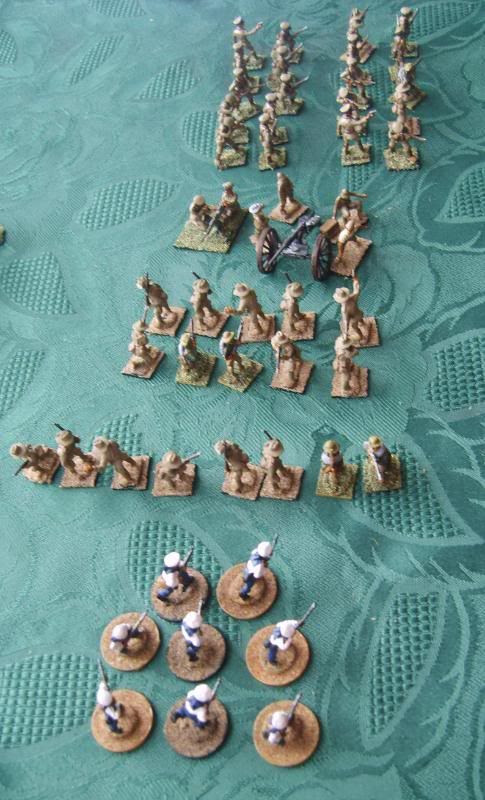 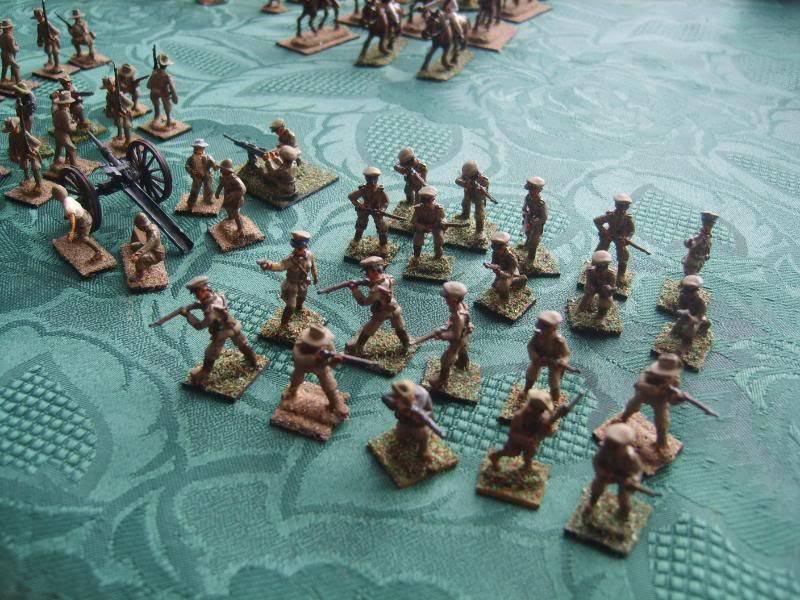 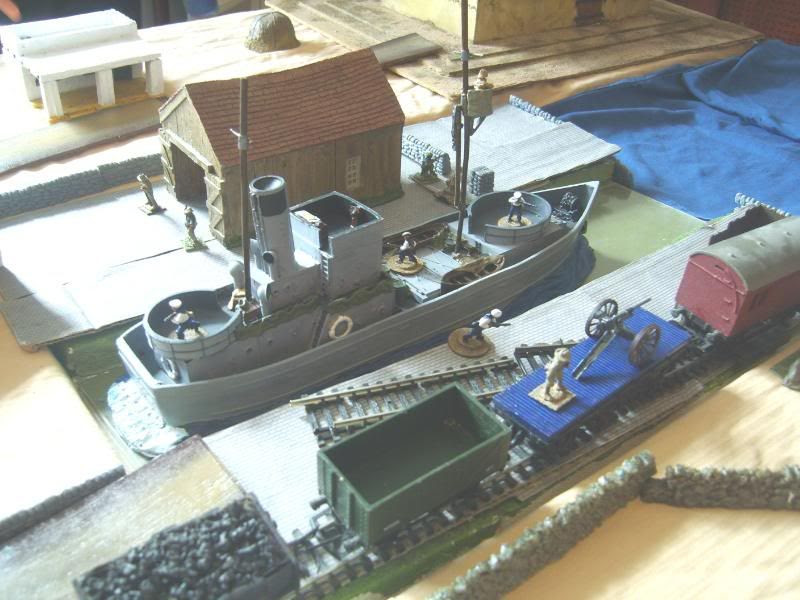 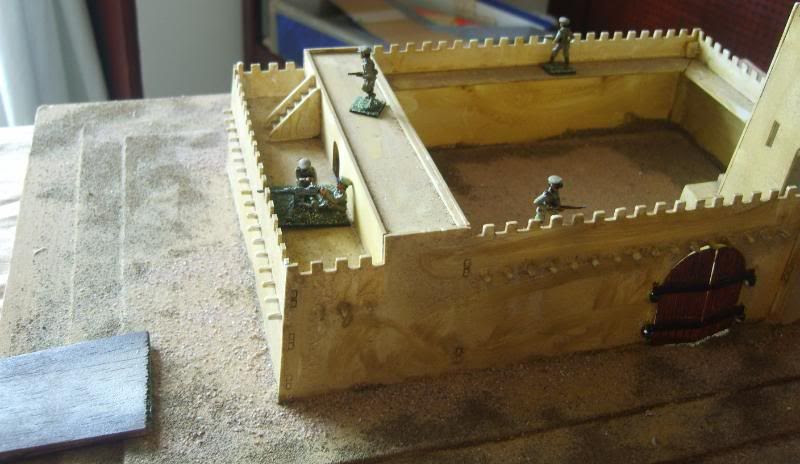 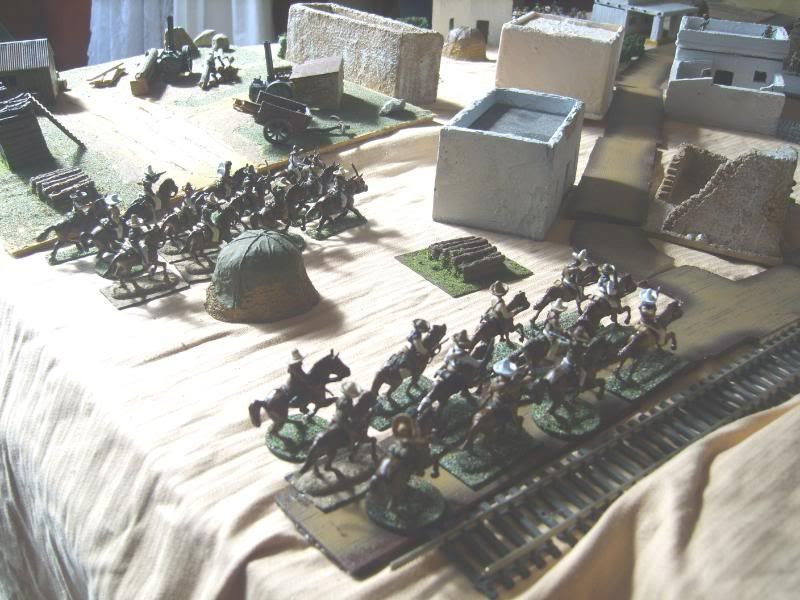 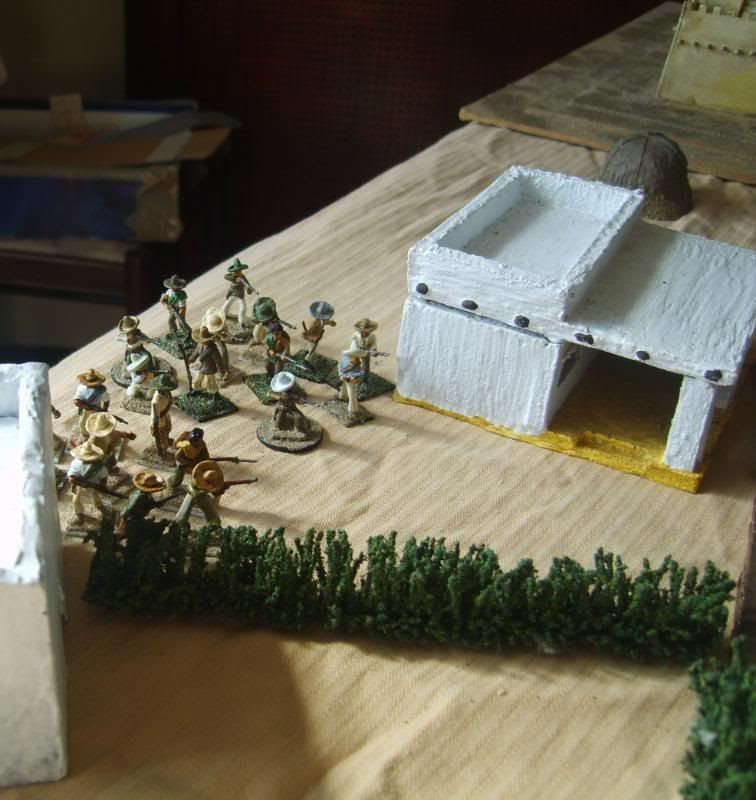 The Southern pincer ran into the roving patrol, the northern one exposed themselves to the Hotchkiss on the fort and took a few surprised casualties 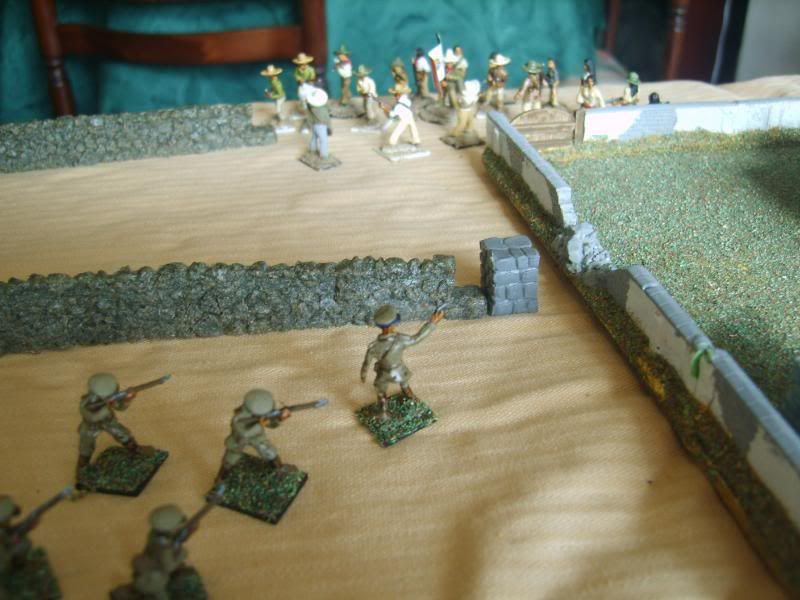 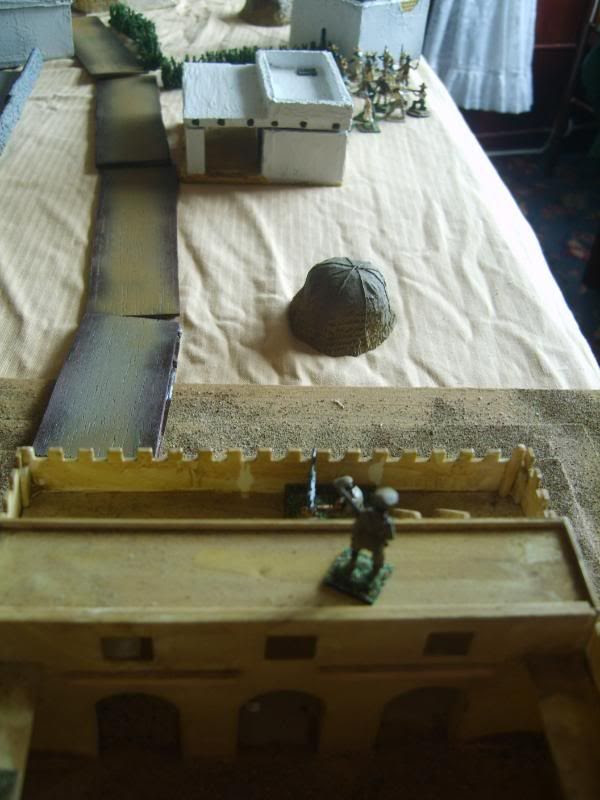 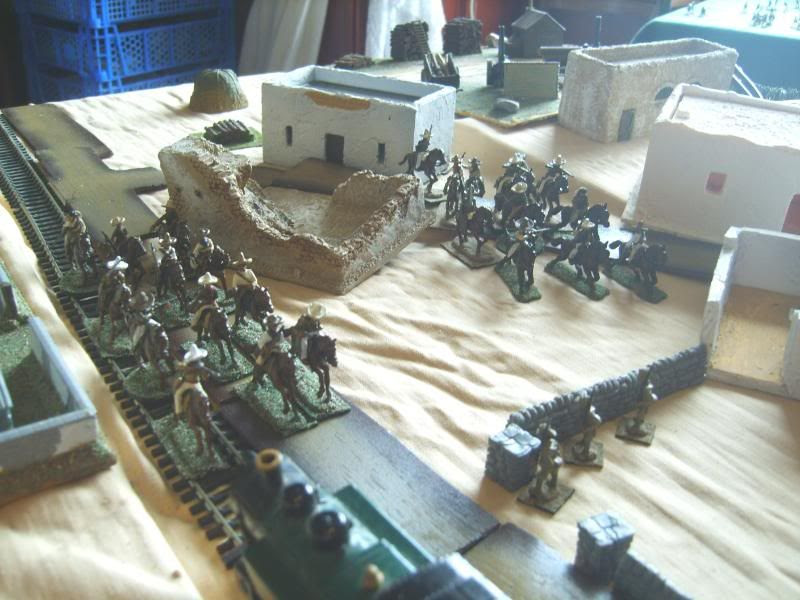 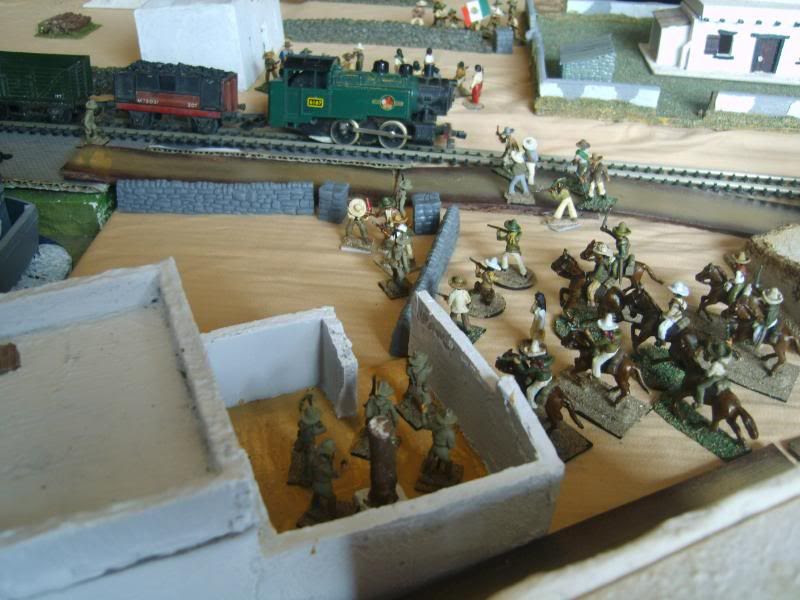 The Hotchkiss "pom-pom" crew never got a shot off, they were cut to pieces by one of the rebel infiltration groups! 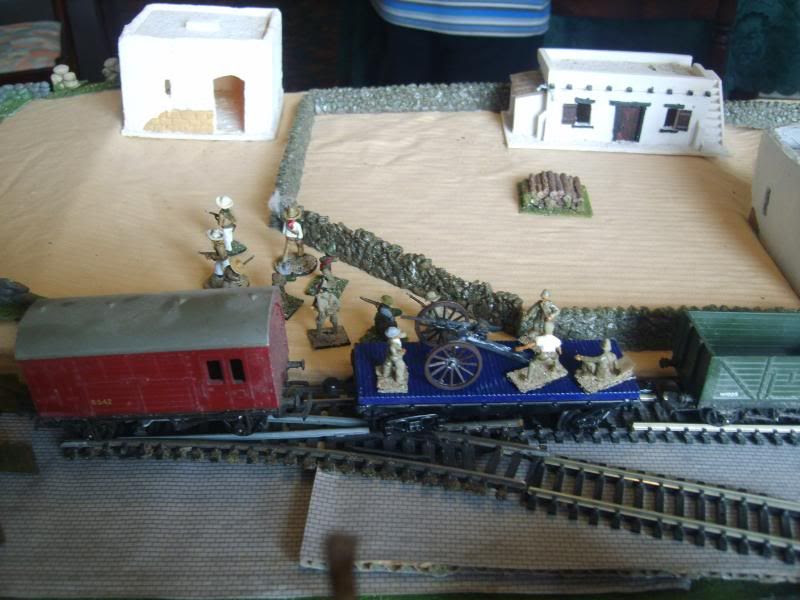 The federal garrison thought about counter-attacking, but seeing the customs house having dynamite thrown through its windows changed their minds and they withdrew back into the fort, where they were safe from rebal attack!! 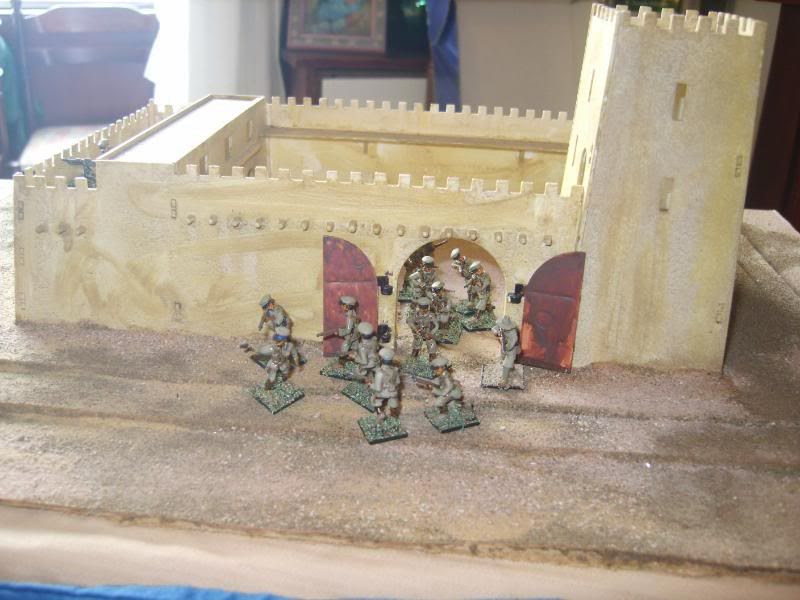 Great game, the boys were very agressive, their use of thrown dynamite and melee had spectacular results, the two infiltration groups were well placed and both had success (the first ambushing the roving patrol, the second storming the Hotchkiss). Total victory to the rebels Viva Colonel Razza!!
Posted by Richard B at 23:40